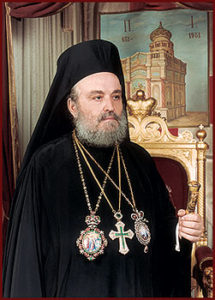 The Holy and Sacred Synod of the Patriarchate of Jerusalem, Chaired by H.H.B. our Father and Patriarch of Jerusalem Theophilos, at its 110th Meeting of July 12/25, 2019, unanimously lifted the degradation of Monk Eirinaios and restored Him to the Episcopal Office, which he formerly held, and to the degree of the Former Patriarch of Jerusalem, attributing thus the full owed respect to His Office.

The Holy and Sacred Synod took this decision for the reasons mentioned in the following text:

“Because the enacted according to the rules continuing order of all things in the Church constructs and promotes peace, in which God’s Spirit, “which constitutes the institution of the Church” finds rest, and because the holy rules were enacted by the Holy Fathers “for the healing of the passions and the cure of the souls”, therefore also for the abolishment of any passionate and selfish action opposed to the unity of the body of the Church, the Holy and Sacred Synod of the Patriarchate of Jerusalem, following amenably the canonical orders, within the spirit of the aforementioned canonical principles, took the decision of the degradation of Patriarch of Jerusalem Eirinaios, in deep sorrow, fourteen years ago, and he had ever since been transferred to the order of Monks. Nevertheless, the Holy and Sacred Synod has never ceased to show a vivid interest in the well-being of the aforementioned brother of ours, with much patience, and for this reason it has unceasingly rendered interceding prayers to God for him.

Because the health condition of our brother in Christ has recently been deteriorating, the Holy and Sacred Synod, having considered the orders of God and acting philanthropically, according to the authority “which is held by the One who heals according to the science of Spiritual medicine” decides unanimously the lifting of the degradation that had been imposed on our brother Eirinaios, fervently praying to “the Lord of every principle and authority” to grant him and all of us the grace of the All-holy and Life-giving Tomb”.

The Holy and Sacred Synod delegated Geronda Secretary-General Most Reverend Archbishop Aristarchos of Constantina and the Secretary of the Holy and Sacred Synod Most Reverend Archbishop Demetrios of Lydda to announce this decision to the former Patriarch Eirinaios, who under the care of the Patriarchate had recently been hospitalized at the French Hospital in Jerusalem and is currently being looked after at the Holy Monastery of Saint Gerasimos of the Jordan.