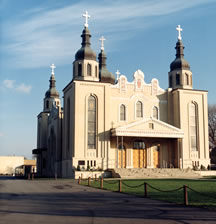 The news of the plane crash is forcing many in the local Ukrainian community to take action and help those in need overseas.

At the Ukrainian Orthodox Church, they say they have strong opinions about what is going on. They are collecting money to help people.

Nicholas Sztanko is the vice president at St. Mary’s Ukraine Orthodox Church. Sztanko says the Ukrainian community is shocked and saddened to hear about the plane being shot down, but many from the country expect bloodshed in the current crisis. Sztanko feels the rest of the world doesn’t know enough about what’s been going on regarding the conflict between the Ukraine and Russia. He says it is concerning that Russia continues to try to take over his native country.

Sztanko says he hopes our government stands up for the Ukraine and raises awareness to Americans about what’s going on.