[ditty_news_ticker id="27897"] Major meeting of the UOC-MP & the Decisions relating to N. Macedonia 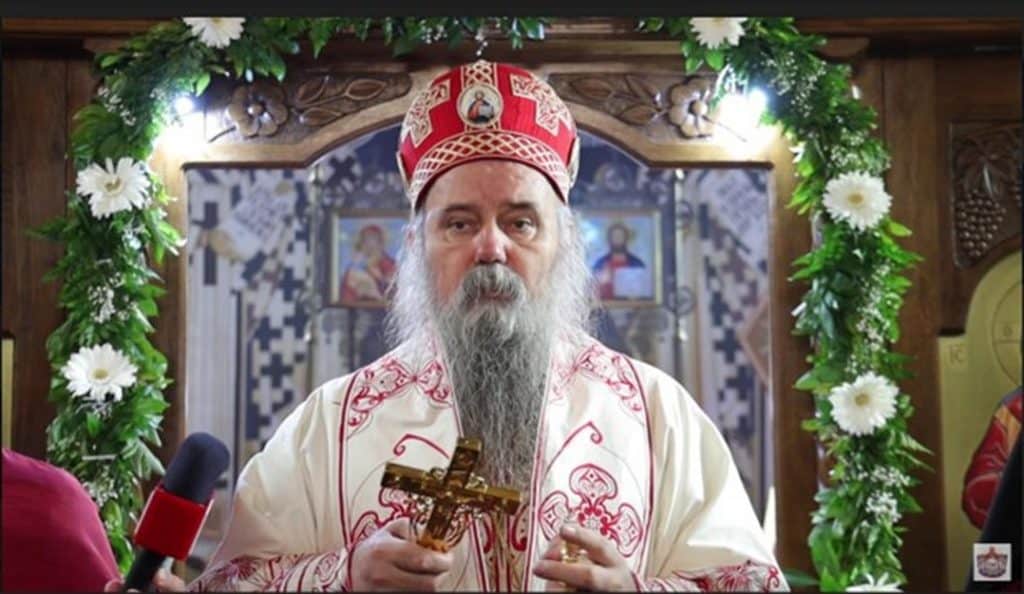 On Friday, May 6, 2022, a video was posted in which Bishop Fotije of Zvornik-Tuzla, a member of the Holy Synod of the Serbian Church, stated that he was personally present earlier in the week at a meeting in the Nis Eparchy between Patriarch Porfirije and representatives of the MOC. https://www.youtube.com/watch?v=-FY-NzLUoJg The bishop spoke with great enthusiasm about the dialogue of love that occurred at the meeting. He expressed the hope that at the Assembly (an annual meeting of all Serbian bishops normally held in May), the MOC will return to unity with the Serbian Church and with all of the Local Orthodox Churches. On the following Monday, May 9, the Holy Synod of the Ecumenical Patriarchate issued its decisions

The Holy Synod of the Ukrainian Orthodox Church – Moscow Patriarchate (UOC-MP) met on May 12.  The members of the Holy Synod are identified at
https://news.church.ua/2022/05/12/vidbulosya-zasidannya-svyashhennogo-sinodu-ukrajinskoji-pravoslavnoji-cerkvi/.   Among the permanent members are Metropolitan Lazar of Simferopol and Crimea and Metropolitan Hilarion of Donetsk and Mariupol. The last meeting of the Synod was on February 28, a few days after the invasion.  The results of the meeting on May 12 are summarized by the UOC-MP at https://news.church.ua/2022/05/12/pidsumki-svyashhennogo-sinodu-ukrajinskoji-pravoslavnoji-cerkvi-vid-12-travnya-2022-roku/.  A number of subjects were discussed at the meeting.   The most important subject was the issuance of a statement which can be read at https://news.church.ua/2022/05/12/zayava-svyashhennogo-sinodu-ukrajinskoji-pravoslavnoji-cerkvi-vid-12-travnya-2022-roku/  The statement first recounts how “the Ukrainian people have been courageously defending themselves against a military attack by the Russian Federation, which has invaded the territory of our sovereign and independent state.”  It states that the UOC-MP “fully shares the pain and suffering of the Ukrainian people” and expresses confidence that “Ukraine will survive and maintain its statehood.”

However, the statement then condemns certain attacks against the UOC-MP.  In this regard it refers to the bills introduced by certain legislators in the Ukrainian parliament to ban the activities of the UOC-MP and to the decisions of certain local governments to ban or restrict the activities of the UOC-MP.  The statement adds:  “We note with sadness that all these facts are the result of the erroneous religious policy during the presidency of P.O. Poroshenko and the destructive ideology of the so-called Orthodox Church of Ukraine.  We are convinced that such activities of the previous government and the OCU became one of the reasons for the military invasion of Ukraine.”  Thus, the UOC-MP contends that the OCU is partially responsible for the Russian invasion.  This is a very serious accusation that will certainly not help relations between the OCU and the UOC-MP.  In contrast, one can remember the appeal made to the OCU by Father Mykola Danilevich, deputy head of the DECR of the UOC-MP, on his Telegram channel a few days after the invasion:  “Now is the time to unite, not quarrel.  Trouble in our common home.  We are all in the same boat.  Do not shake it, because we will all drown.  I very much hope that this trouble will motivate us to appreciate peace in general and interfaith peace in particular.  That we will all rethink a lot.  We are all citizens of Ukraine, let us unite in defense of the state and put aside mutual claims.”  It is certainly possible that the present transfer of parishes from the UOC-MP to the OCU is partially the cause for this significant change of approach by the UOC-MP toward the OCU in the last three months.

Another issue that has worried many lately concerns the future of the Ukrainian Orthodox Church.  The Holy Synod states that today this issue is the subject of church discussion.  In some dioceses there are meetings of the clergy, who express their position.  This information comes to the Primate of the Ukrainian Orthodox Church.  The Holy Synod, in general, welcomes the possibility of a thorough and comprehensive discussion of any issues of church life, as this is the manifestation of the conciliar nature of the Orthodox Church.  But this process must take place without disturbing the church order.

In the near future, a meeting will be convened with the participation of bishops, priests, monks, and laity to discuss the problems of church life which have arisen as a result of the war and which concern us all.  At the same time, we emphasize that we must do everything possible so that the discussion on this or that issue does not take us out of the canonical field and does not lead to new divisions in the Church.

It appears that the above statement is a compromise among the various camps within the UOC-MP.  For those seeking separation from the Moscow Patriarchate, the meeting will involve the participation of priests and laity and will include the discussion of “any issues of church life.”  For those more cautious or objecting to a separation, the meeting is not called a council.  Also there is a provision that the parties should do everything possible so that the discussion will not lead to non-canonical actions or new divisions in the Church.

On a different subject, the Holy Synod of the Ecumenical Patriarchate on May 9 made decisions relating to an “appeal” by the schismatic “Macedonian Orthodox Church – Ohrid Archbishopric.”   The official English text of the decisions can be read in its entirety at https://ec-patr.org/communique-may-9-2022/.  The three decisions are as follows:

To understand these decisions, some background information may be helpful.  When the People’s Republic of Yugoslavia was established under Marshal Tito, the extreme southern portion of the country was designated the Socialist Republic of Macedonia with a capital at Skopje.  At that time, this southern republic was under the jurisdiction of the Serbian Orthodox Patriarchate.  In 1945, the Orthodox clergy in Macedonia began their efforts to establish a church based on the historic Ohrid Archbishopric, which had encompassed the present area of North Macedonia and much of Bulgaria.

Thus, there are now two competing Orthodox organizations in North Macedonia – the MOC and the OA.  The MOC remains by far the largest.  For a period of time, the OA suffered persecution from the government including imprisonment of Jovan, but the persecution has now largely ended.  In recent years, the MOC, supported by the government of North Macedonia, has sought a decision by the Ecumenical Patriarchate establishing the MOC as an autocephalous church.

On January 17, 2020, the Ecumenical Patriarchate invited delegations from the Serbian Orthodox Church and the MOC to come to the Phanar for consultations and an attempt to find a mutually agreeable solution to the schism in North Macedonia.  When there was no response from the Serbian Church, a second letter was sent.  To date it appears that the Serbian Church has still not responded to either letter.   In February 2021, the Serbian Orthodox Church elected Porfirije, a great believer in dialogue, as its primate and patriarch.  With his election, there was new hope that the stalemate between the MOC and the Serbian Orthodox Church might be resolved.  In a letter of congratulations to the new Patriarch, the Prime Minister of North Macedonia, Zoran Zaev, asked Patriarch Porfirije “to devote part of his time and attention to finding a solution through dialogue.”

On Friday, May 6, 2022, a video was posted in which Bishop Fotije of Zvornik-Tuzla, a member of the Holy Synod of the Serbian Church, stated that he was personally present earlier in the week at a meeting in the Nis Eparchy between Patriarch Porfirije and representatives of the MOC.  https://www.youtube.com/watch?v=-FY-NzLUoJg  The bishop spoke with great enthusiasm about the dialogue of love that occurred at the meeting.  He expressed the hope that at the Assembly (an annual meeting of all Serbian bishops normally held in May), the MOC will return to unity with the Serbian Church and with all of the Local Orthodox Churches.  On the following Monday, May 9, the Holy Synod of the Ecumenical Patriarchate issued its decisions, quoted above.

On May 10, the Holy Synod of the MOC expressed “most heartfelt gratitude” to Ecumenical Patriarch Bartholomew for the decisions made on May 9.  The MOC Synod also stated that talks with the Serbian Orthodox Church will continue until the final status of the church is determined.  http://www.mpc.org.mk/vest.asp?id=7622  Comments expressing concerns have been made by the representatives of the Moscow and Bulgarian Patriarchates, and these comments are summarized at https://orthochristian.com/146091.html (English).  In conclusion, the action on May 9 appears to be only the first step, and one must wait and see what will happen in the contemplated negotiations between the Serbian Church and the MOC (now the Ohrid Church).

Lastly, the Orthodox Pre-Assembly of the World Council of Church held its first session on May 12, 2022, in Paralimni, Cyprus.  The purpose of the meeting, which will last until May 16, is to coordinate a common stance on topical issues on the inter-Christian agenda in anticipation of the WCC Assembly to be held August 31 to September 8, 2022, in Karlsruhe, Germany.  The delegation of the Moscow Patriarchate at the Orthodox Pre-Assembly is led by Metropolitan Hilarion.   https://mospat.ru/en/news/89224/   Attendees include representatives from the Ecumenical Patriarchate, the Patriarchates of Alexandria, Antioch, Jerusalem, Moscow, Serbia, and Romania, and the Churches of Greece, Poland, Albania, and Greece.  https://en.famagusta.news/local/sto-paralimni-i-synantisi-gia-to-pagkosmio-symvoulio-ekklision/  The meeting appears to be a unique opportunity for members of the Orthodox and the Ancient Oriental Churches to meet during this time of major intra-Orthodox disputes.  Numerous photos of the meeting can be seen at https://orthodoxtimes.com/orthodox-churches-pray-and-reflect-on-reconciliation-as-wcc-11th-assembly-approaches/  On May 12, Metropolitan Hilarion had dinner with Archbishop Chrysostomos, primate of the Orthodox Church of Cyprus, at the invitation of the Archbishop.  https://mospat.ru/en/news/89235/