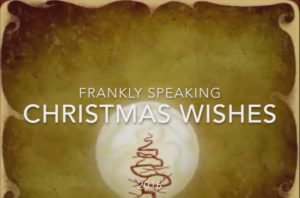 “I believe with all my heart that those who will direct Japan – and all other Nations – in the decades to come must not ignore the message of Jesus Christ. He is the only hope for this troubled world.” – Captain Mitsuo Fuchida

Christmas was once America’s preeminent national holiday. First celebrated in the year 98, it was forty years later before the early Church officially adopted Christmas as an annual Christian festival. It was not until the fifth century that the day of its celebration became permanently fixed on the 25th of December.  Up to that time it had been irregularly observed at various times of the year.  Originally banned in the United States when, after the American Revolution, it was considered an English custom, Christmas was officially recognized as a national federal holiday by Congress and signed into law by President Ulysses S. Grant on June 28, 1870.

Over the past few decades, however, the annual celebration of the birth of Jesus of Nazareth, the Divine spiritual leader whose teachings form the basis of the Christian religion, has gradually been supplanted by more inclusive and commercialized adaptations. In an effort to mitigate the chance of alienating non-Christians, the more diplomatic expressions of “Happy Holidays” or “Season’s Greetings” have entered the season’s lexicon of popular salutations. As a result of multicultural sensitivities and political debates over secular-religious tensions, the ranking of the Nation’s once dominant holiday has now been eclipsed by other annual observances.

Like Donald Trump’s trademarked slogan, initially coined by candidate Ronald Reagan during his 1980 presidential campaign, Christmas, like America, can and should be made “Great Again!” In fact, many firmly contend that the “greatness” of America’s cultural, economic, and defensive sensibilities are closely interrelated to the simultaneous reemergence of the Nation’s Judeo-Christian pedigree. While such assertions may generate bitter disagreement, at the very least, frank and intelligent conversations concerning the Nation’s founding identity and its Christmas tradition would be instructive and culturally cathartic.

Remarkably, a wonderful commentary for inaugurating such discussions is an animated television program. Based on the Peanuts comic strip created by Charles M. Schulz, A Charlie Brown Christmas made its debut on CBS on December 9, 1965. Having received Emmy and Peabody Awards, the film went on to become the longest running holiday special in television history.

In the classic story, Charlie Brown finds himself depressed despite the onset of the cheerful holiday season. When he complains about the overwhelming materialism that seems to permeate the Christmas season, Lucy suggests that he become director of the school Christmas pageant. After selecting a frail Christmas tree sapling to counter his friends desire to modernize the Biblical narrative, Charlie Brown is mocked by the cast. Frustrated with their cavalier disregard of tradition, he cries “Doesn’t anyone know what Christmas is all about?”

Standing alone on the stage, Linus van Pelt, Charlie Brown’s best friend, courageously announces that he alone knows the answer and begins a spotlight solo resuscitation of the 2nd Chapter of the Gospel of Luke. “I bring you good tidings of great joy, which shall be to all people . . . For unto you is born this day in the city of David a Savior, which is Christ the Lord.” When finished, the blanket-carrying philosopher-theologian gallantly announces, “That’s what Christmas is all about, Charlie Brown!”

Inspired by the Biblical Christmas message of peace, forgiveness, and the desire for good will among people, Charlie Brown quietly carries the fragile Christmas tree out of the auditorium. When home, however, the sapling flops at the weight of a large ornamental ball that he hangs on one of its branches. The balance of the Peanuts characters arrive just as the story’s insecure protagonist runs off in frustration crying, “I’ve killed it!”

In the classic film’s most poignant scene, Linus gently wraps his comfort blanket around the base of the bent-over tree, gently propping it upright. Motivated by the stewardship of their young friend’s sacrificial action, the rest of the cast adds the remaining tree decorations while humming, “Hark! The Herald Angels Sing.” Surprised at the heartfelt carolers surrounding the now erect and beautifully decorated tree, television’s most loveable looser returns and is greeted by his peers with a joyous, “Merry Christmas, Charlie Brown!”

This is how to make Christmas Great Again! Only by honestly acknowledging and courageously re-wrapping the holiday’s fundamental message, the “good tidings” (Luke 2:10) of peace, forgiveness, and selfless altruism around its roots, can we, like Linus, hope to strengthen our Nation’s drooping economic, civic, and religious branches.

Most Americans can identify with Charlie Brown’s desire to heal a feeble sapling that, in the final analysis, is a reflection of personal as well as societal vulnerabilities. The country’s psyche intrinsically understands that, left on its own, its branches cannot support the high-minded ornamentation that civic, business, and even religious leaders desire to hang on it. In the end, when honestly reflecting on its condition, the Nation like humanity, does in fact recognize its need for a Redeemer, a Comforter, to provide much needed reinforcement. Nonetheless, while each citizen can freely choose how and if to celebrate, the truth of the matter is that Christmas is and, to this point, remains a Christian-inspired national holiday whose hope-filled message, no amount of historical amnesia or social deconstruction can distort.

Each year, on December 7, two days before the original debut of A Charlie Brown Christmas, the United States fortuitously commemorates the infamous 1941 attack on Pearl Harbor. The World War that was tragically precipitated by the attack exemplifies the degree to which humanity needs the Christmas message of peace, forgiveness, and good will to heal humanity’s spiritual as well as geo-political discords.  Here, the story of Mitsuo Fuchida, Japan’s most decorated Imperial Navy pilot and officer who led the surprise attack on Pearl Harbor shouting “Tora, Tora, Tora,” is illustrative.

The remarkable life-story of Fuchida was first published in Readers Digest in 1954. According to the Japanese Captain’s own words, his entire wartime obsession was based on a “growing hatred” towards America. “After that morning (December 7),” he said, “I lifted the curtain of warfare and put my whole effort into the war that followed.” While Fuchida’s life was spared many times during the war, his hostility was forever changed when he met Jacob DeShazer, an America pilot who was captured, tortured, and subsequently motivated to return to Japan to preach the Christian message of forgiveness.

“After meeting Jacob,” said Fuchida, “then buying and reading the Bible, my mind was strongly impressed and captivated. I think I can say today without hesitation that God’s grace had been set upon me. Right at that moment,” writes Fuchida, “I seemed to meet Jesus for the first time. I understood the meaning of His death as a substitute for my wickedness, and so in prayer I requested Jesus Christ to forgive my sins and change me from a bitter, disillusioned ex-pilot to a well-balanced Christian with purpose in living … I became a new person.”

A changed life is strong evidence for the transforming power of the Christian faith. Like DeShazar, Fuchida’s hate infested heart was rehabilitated by the love and grace of Christ. As a result, in 1950 the notorious Japanese pilot was baptized and spent the remainder of his life as a Christian missionary until his death in 1976. This is the message that can make Christmas Great Again!

Linus is correct. Christmas is indeed a time to rededicate ourselves, families, and Nation to the motivations of peace, forgiveness, and good will among all people. Christmas is more than carols, cards, and cookies. Sparkling snow, romantic fireplaces, eggnog, sleigh bells, toys, and tinsel cannot be permitted to sponsor the primary message of the season. Christmas is about God’s love and faithfulness made tangible through history. Through the Incarnation, the Creator became a creature, the Mighty One became a vulnerable infant whose self-sacrificial life goal was to redeem the cosmos. In the end, this is the story that has left humanity to wonder and awe about redemption not reindeer, holiness not holly.

While the redemptive message of Christmas has remained the same for nearly 2,000 years, its origin predates the announcement at a cave-hewn manger. Referred to as the Protoevangelion (first gospel) by early Christian theologians, the first Christmas message was not preached by an angel but by God Himself. He is the One who first announced that because of the enmity created by sin between people, creation, and God humanity needed a Redeemer.  The Garden of Eden was the sanctuary . . . Adam, Eve, and a coiled, frightened serpent were the congregation. The Good News was that the “seed of the woman” would one day “bruise the serpent’s head” (Genesis 3:15) and liberate humanity and all creation from enslavement.

Eden, Bethlehem, and Golgotha must be appreciated together as the Holy Nativity of Jesus, and, therefore, the Christmas holiday itself would be completely unnecessary were it not for sin. Humanity’s distorted image is the tragic backdrop against which the glorious first Christmas message in the Garden of Eden was given. Understood in such a comprehensive fashion, the authentic message of Christmas is revealed. God humbled Himself and became a helpless infant to grow up and conquer death, hell and the sting of sin by stomping on the serpent’s (satan’s) malevolent head. This is the primordial story of virtue’s triumph over evil, of light over darkness, of forgiveness over bitterness, of love over hate from which all other human narratives receive their inspiration.

A few years ago a prominent northeastern newspaper announced the unconventional recall of a cookbook. While automobiles, toasters, and baby seats are often recalled due to mechanical defects, cookbooks are not normally the focus of such retractions. Nonetheless, the cookbook in question was recalled because of a particular recipe that had inadvertently omitted an important ingredient.  The publishers realized that if the recipe was followed as printed the remaining ingredients could actually blow up in a cook’s face. Because of this inherent hazard, the cookbook was recalled.

America has always aspired to be a Nation of peace, forgiveness, and love. Such ornamentation, however, cannot be hung on feeble branches, but humbly displayed on limbs made sturdy by what Linus’ blanket represents. This is the primary Message, the ingredient that the Nation should not omit during it’s cultural journey to the Bethlehem manger.  Jesus is the supporting blanket, the Comforter, the vital ingredient of the Season! This is the lesson that the Charlie Browns of society must come to appreciate.

Without the Christ Child at its center, the Nation is in danger of advancing a distorted Christmas recipe that ultimately leads to dissatisfaction and despair. An incomplete Christmas cannot fill our hearts with peace. It is unable to heal the annual explosion of depression, guilt, and loneliness that has tragically come to characterize our Nation’s once joy-filled season. Only Christ can bring peace and good will to all people. Only God as Comforter can make weak saplings upright and strong. Only Christ is able to help enemies forgive and unite. He alone can change lives, turning aviators into evangelists. In the words of Captain Fuchida quoted at the outset of this essay, “He is the only hope for this troubled world.”

Making Christmas, as well as America, Great Again begins by authentically sharing this hope-filled message. The God of history, our all-powerful and merciful God, has intervened in the world scene, making it possible for all people to forgive, love, and have peace. The Christmas angel made this message clear, “Peace on earth and mercy mild, God and sinners reconciled!”

Linus is correct – this is what Christmas is all about.  This is how to make Christmas Great Again!