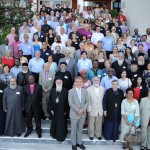 The 60th session of the Central Committee of the World Council of Churches held from 28 August to 5 September 2012 at the Orthodox Academy, Crete – Greece

At the invitation of His All Holiness Bartholomew, the Ecumenical Patriarch, the Central Committee of the World Council of Churches met in Crete (Greece) to prepare for the next Assembly

The Central Committee members focused on the 10th Assembly, which is to be held in South Korea in 2013. The members finalized the documents to be presented to the Assembly for discussion and action by the delegates of the Churches. The topics included: unity of the Church, mission and evangelism, environment and diakonia.

The Public Affairs Committee also discussed the situation in Syria and adopted a statement addressing the Christian presence in the Middle East and calling all warring parties in Syria to respect the will of the people for the sake of the common good.