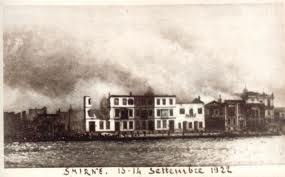 by Katherine Boulukos
Special to The National Herald

BROOKLYN – On September 22, a memorial service was held at the Three Hierarchs Greek Orthodox Church in Brooklyn, under the leadership of Very Reverend Archimandrite Eugene Pappas and His Grace, Bishop Sevastianos of Zela. The service commemorated the Smyrna Holocaust of 1922, honoring the blessed memory of the millions who were lost during that painful period.

This particular recognition is coordinated annually by Archon Depoutatos Basil (Basilios) Theodosakis, who has dedicated his life to raising awareness of the genocide to global attention. He is credited for pursing the drive to raise awareness about this attack on the Orthodox Christians. As the end of the service, Theodosakis received a number of commendations for his untiring efforts, including a letter from Mayor Bloomberg and various other dignitaries.

In the eulogies presented by both Pappas and Sevastianos, both cited the current terror against Orthodox Christens in Egypt, Syria Lebanon, Iraq, and other lands. Both appealed to the people that we make contact with our political leaders expressing our outrage aimed at our Christian people and their churches in these lands.