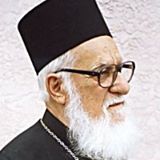 UPDATE:  (Source) A time of visitation will be held Thursday, May 26, 2016 from 6:00 to 6:30 P.M. at Saints Markella and Demetrois Greek Orthodox Church, 104 Bryn Mawr Boulevard, Mary Esther, Florida 32569, with a Trisagion Service to follow at 6:30 P.M. A reception will follow services. An Orthros Service will be held Friday, May 27, 2016 at 9:00 A.M. with the Divine Liturgy at 10:00 A.M. and the Funeral Service to follow at 11:30 A.M. Interment will follow at Destin Memorial Cemetery. Expressions of love and sympathy can be viewed or submitted at [email protected]
or www.McLaughlinMortuary.com.

Orthodox Christian Laity (OCL) has received news of the death of Archimandrite Eusebius Stephanou on May 23, 2016. He was the father, dean and geronda of the Orthodox Christian Renewal movement in the USA and Greece. He was a brilliant and prolific writer and a powerful preacher and teacher. He filled a great void in the intellectual life of the Church.  He was controversial.  He was in love with Christ and His Church.  No one can replace him. He was a supporter and board member of OCL and challenged us to stay focused on our mission of RENEWAL.  He is at peace with the Lord in the place that the Lord has prepared for him.  He has received his crown of victory.  His influence and message and memory will grow.  Rest in peace Fr Eusebius.  Memory Eternal.   —George Matsoukas, OCL Executive Director

Eusebius A. Stephanou was born on June 15, 1924 in Fond du Lac, Wisconsin to Fr. Alexander and Marika Papastephanou. Baptized with the name Agamemnon, Stephanou lived as a child in Detroit, Michigan and Lorain, Ohio where his father served as priest in the local Greek Orthodox Church. In 1942, Stephanou entered Holy Cross Greek Orthodox Seminary, then located in Pomfret Center, Connecticut. Holy Cross relocated to Brookline, Massachusetts in 1946, Stephanou’s senior year. In 1950, he was tonsured a monk in Cleveland, Ohio, receiving the name Eusebius. At this time, he also shortened his name from “Papastephanou” to Stephanou. On September 17, 1950, Stephanou was ordained a Deacon at St. Constantine & Helen Greek Orthodox Church in Detroit. In 1951, he travelled to Greece to study at the University of Athens. On February 10, 1953, Stephanou was ordained to the holy Priesthood in his father’s hometown of Philiatra.

In 2006, George Matsoukas posted the following review of Maria Stethatos’ book, The Voice of a Priest Crying in the Wilderness, which documents the life of Fr. Eusebius Stephanou.

It is a pleasure for me to recommend “The Voice of a Priest Crying in the Wilderness” by Maria Stethatos for your reading consideration.  This book about the life Father Eusebius Stephanou is important on many levels.  First, it provides an insight into the dedication of the men called to the priesthood and trained at Pomfret, Connecticut.  With each passing year, their numbers are diminished; and, this past month saw the falling asleep in the Lord of Father George Kalpaxis.  Their ministries are examples of serving and shepherding the Church with dedication and integrity.  Truly, these first American-born clergymen, trained in the USA, helped lay the foundations of Orthodoxy in America.  They knew how to work in synergy with our lay immigrant grandparents.  They understood that to build up the church, cooperation of clergy and laity was necessary.

Father Stephanou’s ministry is unique in the annals of our church history in America.  He was groomed to be the first American-born bishop as expressed to him by Archbishop Iakovos upon his arrival as archbishop in 1959.  But this was never to be.  Instead, Father Stephanou was marginalized as a priest because of his interest in the spiritual renewal of the Orthodox Church in America. The turning point of his ministry was 1968 when he published “The Logos,” dedicated to Orthodox Christian spiritual awakening, which offered evangelical and prophetic insight into church life.  Three respected members of the Chicago community assisted Fr. Stephanou in “The Logos” outreach.  They were:  Dr. Andrew Kopan, Katherine Valone and Dr. Thomas Lelon.  As co-workers, they offered editorial, financial, prayer and fellowship assistance to Fr. Stephanou.  They shared an optimism rooted in faith that they could be a small nucleus of what eventually might grow into a multitude of Orthodox believers eager for Christ and His cause of Orthodox spiritual rejuvenation.  In 1997, “The Logos” was renamed “The Orthodox Evangelist.”  The Logos itinerant ministry, preached by Fr. Stephanou worldwide, because of his limbo status and its publications, is celebrating 40 years of spiritual renewal of Orthodoxy in America.  From the beginning, this ministry was Pan-Orthodox in scope and International in reach.   Thousands of Orthodox Christians all over the world have been touched by the spiritual lessons of this ministry and the preaching of Father Stephanou.

On another level, the biography shows the workings of the Greek Orthodox Archdiocese and how it treats its priests. From November 20, 1968 until April 14, 1987, Father Stephanou’s status within the Church was kept ambiguous.  He was summoned to a church tribunal on November 20, 1968. He was suspended for six months. After the six month period, he did not receive word that the suspension was lifted.  He was put in limbo.  This ambiguous state remained until 1986, when he was informed that his file was forwarded to the Patriarchate for his defrocking.  He was not defrocked, and on April 14, 1987, he was assigned by Metropolitan Silas to serve Holy Week and Easter Services at the Greek Orthodox Church in Lynchburg, Virginia.

The scandal is that the Church hierarchy never was clear in defining what offenses Father Stephanou committed.  They did not offer Father Stephanou due process and did not allow him to defend himself.  The book is a testimonial to the survival, nourishment, and growth of his soul despite his being made an outcast by the hierarchy and some of his fellow clergyman and parish communities.  The preaching of the Word sustained him the many years that he was in limbo.  As he wrote to Metropolitan Silas in 1983 after he was forbidden in his diocese: “The ministry of the Word does not come necessarily with ordination, but is the mandate of Christ for every layman and especially for those who are called by God to “to do the work of an evangelist.”  There is no question that for the sake of church order, even the layman can receive the blessing of his priest and bishops for the ministry of Evangelism.  How much more the ordained priest!