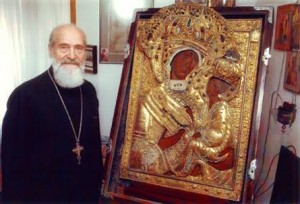 Visitation will resume at the cathedral at 3:00 p.m. on Friday, October 23.  The Burial Service for a Priest, at which His Grace, Bishop Paul of Chicago will preside, will be celebrated at 7:00 p.m.

Bishop Paul will preside at the celebration of the Hierarchical Divine Liturgy and Trisagion at 9:30 a.m. on Saturday, October 24, followed by interment at Elmwood Cemetery.

Born Sergei Kozhevnikov near Voronezh, Russia in 1927, he and his family relocated to Latvia, where his father was able to secure employment.  There they met the Latvian Orthodox priest, Father John Garklavs, the future Bishop John of Riga.  With the outbreak of World War II, the family found themselves behind German lines.  During his high school years in Riga, Sergei resided at the Diocesan Residence and served as Bishop John’s subdeacon.  As the war was ending, Bishop John and several priests and their families were forced to evacuate Latvia, and the young Sergei elected to accompany them.  Later, in Germany awaiting emigration to the US, Sergei took the Bishop’s surname, Garklavs.  Accompanying them was the Tikhvin Icon of the Mother of God, and their journeys would fall under her protection.  After arriving in the US In 1949, Bishop John was appointed Bishop of Detroit and Cleveland and, in 1957, he was named Archbishop of Chicago, serving until his retirement in 1978.  He fell asleep in the Lord in 1982.

In New York, Sergei met and soon married Alexandra Iowina, a native of Belarus who also had arrived in the US in 1949.  The following year, he was ordained to the diaconate and served with His Eminence, the late Metropolitan Leonty.  After his ordination to the priesthood he was assigned Second Priest at Holy Protection Church, Gary, IN.  In 1960, he was assigned Rector of Saint Panteleimon Church, Argo-Summit, IL, where he served until 1983, when he was assigned Dean of Chicago’s Holy Trinity Cathedral.  He retired and was named Pastor Emeritus of the cathedral in 1997.

Political changes after the fall of the Soviet Union made it possible to open a dialogue for the return of the Tikhvin Icon.  Father Sergei travelled to Russia several times, beginning in 1999, which resulted in the triumphant return of the Icon to Russia’s Tikhvin Monastery in 2004.  That event brought him into contact with the clergy and faithful in Tikhvin, and he subsequently spent extended periods living at the monastery, especially after the repose of Matushka Alexandra in July 2005, where he became a much respected spiritual father.  He had even been named an honorary citizen of the City of Tikhvin, and came to play an influential role in the difficult process of restoring the monastery to its former glory.

In the US, however, he will be remembered for being a true, hard-working, faithful and devout Orthodox Christian priest.  He was a true “people person,” having both the old-world sense of hospitality by which he warmly encountered others, and “new world” approachability, by which he refrained from using his clerical position to maintain an aloof status.  He was a genuine servant of Our Lord Jesus Christ, who became known throughout Orthodox Chicago as a man of spiritual integrity and a true pastor.

Predeceased by his beloved wife, Matushka Alexandra, who fell asleep in the Lord July 9, 2005, he is survived by three sons, the Very Rev. Alexander Garklavs, Rector of Holy Trinity Church, Parma, OH, and George and Paul Garklavs; two daughters, Mary Smith and Olga Prevas; 12 grandchildren; and one great-grandchild.

May Father Sergei’s memory be eternal!