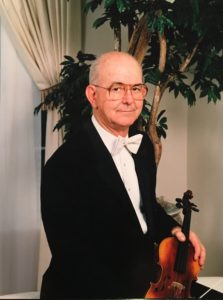 Upon learning of the death of Chris Xeros on October 7, George Matsoukas informed the board members of Orthodox Christian Laity with this remembrance of Chris:

May the memory of a unique individual, Chris, be eternal.  He was part of OCL for 32 years.  He always had ideas, energy, and much to say. He was a colorful character. He served OCL in HIS way. We will all miss him. He was totally committed to the mission of OCL. He missed very few meetings in 32 years. I will miss him. We talked frequently, and he always made me laugh.

His family was a pioneer Greek American Family in Dallas over 125 years ago. His father was a haberdasher. He specialized in cowboy hats. That is why Chris had so many hats and always wore them. After Katina passed away, he was lonely. Following her death, both his children, one son and one daughter, passed away. But he was resilient and lived his life as best he could. He carried on.

He delighted in being a psalti….it was his passion. He was chanter at Holy Trinity for over 50 years. He always went to the Psalaterio whenever OCL attended vespers or liturgy in the many cities that we held meetings. He was an entrepreneur and inventor with a patent. He invented the holder for the bottom piece that sets on the floor of bass string instruments. His profession was symphony orchestra conductor, and he was honored within the last two years for his contribution to classical music appreciation by the Regional Music and Arts Community where he directed.

These past three years were difficult for Chris, because of failing health, but this did not deter his spirit. He made generous contributions to his beloved Holy Trinity Greek Orthodox Church, helping them with beautification and building maintenance programs. His church community was his extended family.  He looked for fellowship within that community.

I am sure he was greeted by a choir of angels singing the Holy Hymn of the Trinity. May he rest in peace.

XEROS, Chris Peter – passed away on October 6, 2019. He was born September 23, 1927 to immigrant parents, Peter and Helen Xeros. Chris grew up in Old East Dallas, along with his siblings, Constantine “Gus”, Basil, and Effie. He was a graduate of Woodrow Wilson High School and later inducted into the Woodrow Wilson Hall of Fame (2014). He studied violin at the Julliard School of Music followed by service in the United States Army during the Korean Conflict. After his military service, Chris attended North Texas State College, now The University of North Texas, receiving his Bachelor and Masters Degrees. Chris was involved in the classical music industry for most of his life. For 36 years, he taught music in the Dallas Independent Schools, including a long tenure at W. T. White High School. In 1961, he founded the Richardson Symphony Orchestra and served as its conductor until 1992. After retiring from the RSO, he was urged to assist in the founding of the Allen Philharmonic and served as its director for nine years, retiring in 2001. Chris was a lifelong member of Holy Trinity Greek Orthodox Church, serving as a choir director, chanter, and Byzantine Music Scholar. Chris was preceded in death by his wife, Katina Michaels Xeros, his son Charles Xeros, and his daughter Eleni Xeros Huff. He is survived by brother Basil and his wife Elaine Xeros, three grandchildren and two great grandchildren, as well as numerous nieces and nephews. A prayer service will be held at 7 pm, Wednesday October 9th at the Holy Trinity Greek Orthodox Church (HTGOC). Funeral will be held at 10 am on Thursday October 10th at HTGOC, followed by interment at Restland Cemetery. Donations may be made in his memory to the Holy Trinity Greek Orthodox Church Benevolent Fund. “May his memory be eternal “