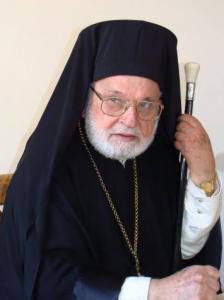 Sayidna Joseph recalls Sayidna Elia as a dynamic man of God, a gifted theologian, and highly educated. He was a canonist in both civil law and church law who understood the spirit and the depth of the Orthodox Church’s canons. He also fondly remembers Metropolitan Elia as his principal in the Orthodox Christian schools of Damascus in the 1950s and 1960s.

Metropolitan Elia served as secretary to His Beatitude Patriarch Theodosius VI before coming to North America. Many of our clergy and congregations will remember Sayidna Elia from the 1970s when, as Titular Bishop of Salamia, he lived in the Archdiocesan Headquarters and assisted His Eminence Metropolitan Philip of thrice-blessed memory in the administration of this Archdiocese.

His Beatitude Patriarch John X has appointed His Grace Bishop Nicholas (Baalbaki) to be the patriarchal vicar of the Archdiocese of Hama until the Holy Synod elects a new metropolitan.

Sayidna Joseph has asked the clergy and laity of this Archdiocese to pray the Trisagion Prayers for Metropolitan Elia for the next forty days and to keep him in their personal prayers for the departed. On behalf of the bishops, clergy, Board of Trustees, the organizations and all of the faithful of this Archdiocese, His Eminence Metropolitan Joseph offers to His Beatitude, the Holy Synod of Antioch and the Archdiocese of Hama our love, prayers and condolences.

May God receive Metropolitan Elia in His Heavenly Kingdom and may his memory be eternal.