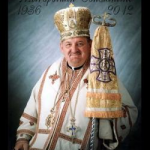 His Eminence, Metropolitan Constantine, 76, Ruling Hierarch of the Central Eparchy and Primate of the Ukrainian Orthodox Church of the USA, fell asleep in the Lord on the morning of Monday, May 21, 2012 — one day after celebrating the 40th anniversary of his Archpastoral ministry in the Pittsburgh area.

According to a press release issued by the Consistory Office of Public Relations, Metropolitan Constantine was “stricken with a serious illness just a few weeks ago and was released only three days ago from a local Pittsburgh hospital, which enabled him to participate in the celebration of his 40th anniversary of Archpastoral ministry among the faithful of our Holy Ukrainian Orthodox Church of the USA. This celebration took place at the Dormition of the Mother of God Ukrainian Orthodox Church in McKees Rocks, PA with the presence of his brother Ukrainian Orthodox hierarchs and visiting bishops of other Orthodox jurisdictions, his family from the United States and his beloved spiritual children, the clergy and faithful of the UOC of the USA, South America and Europe.”

Additional information will be posted as it is received.

May Metropolitan Constantine’s memory be eternal!