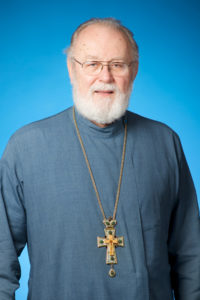 Sea Cliff, NY [OCA] – On Tuesday evening, August 3, 2021, Protopresbyter Leonid Kishkovsky, longtime Director of External Affairs and Interchurch Relations for the Orthodox Church in America (OCA) and Rector of the Church of Our Lady of Kazan in Sea Cliff, New York since 1974, fell asleep in the Lord at Glen Cove Hospital in Glen Cove, NY at the age of 78 following a heart attack.  In spite of serious health issues over many years, he remained in active service to the Church until his repose. 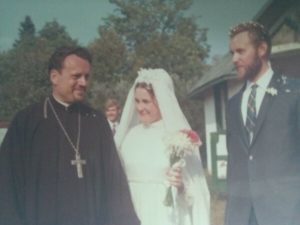 Leonid and Mimi Kishkovsky on their wedding day with Fr. John Meyendorff.

Father Leonid Kishkovsky was born in Warsaw, Poland on March 24, 1943.  After becoming refugees in West Germany for several years, his family arrived in the United States in March 1951 and settled in Los Angeles next door to Holy Virgin Mary Church. Leonid grew up assisting the clergy in the altar, particularly longtime rector Father Dimitri Gisetti, who inspired him to go to seminary and become a priest. After completing studies in political science and history at the University of Southern California in 1964, he enrolled at Saint Vladimir’s Seminary in New York, where he concluded his formal education in 1967.  Over the next two years, Leonid held several positions in youth ministry on both the local (at his home parish) and inter-jurisdictional levels.  It was at a Saint Vladimir’s Seminary student retreat that he met Alexandra Koulomzine from Montreal, Canada.  On August 31, 1969, they were married by Father John Meyendorff and Father Alexander Schmemann at Saint Sergius Chapel in Lac Labelle, Quebec, Canada.  On September 20, 1969, Leonid Kishkovsky was ordained a deacon at Saint Vladimir’s Seminary, and on November 2 ordained a priest by Bishop Dmitri (Royster) at Holy Virgin Mary Church in Los Angeles.  Father Leonid was assigned to Saint Innocent Chapel at Holy Trinity Cathedral in San Francisco where services were conducted in English, allowing him to continue outreach to young people.  After nearly five years of service in San Francisco, Father Leonid accepted a transfer to New York.  With his family he moved into the rectory of the Church of Our Lady of Kazan in Sea Cliff, NY where he would reside for the rest of his life.  He was assigned as parish rector effective July 1, 1974.  At the same time, he was assigned as Assistant to the Chancellor at the OCA Chancery, in Oyster Bay Cove near Sea Cliff. 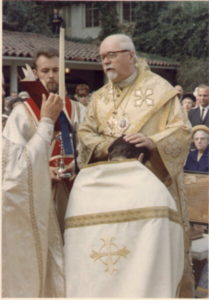 Seminarian Leonid Kishkovsky serves as subdeacon while Metropolitan Ireney (Bekish) elevates Fr. Sergei Glagolev to the rank of archpriest in 1966.

At the outset of his parish ministry in Sea Cliff, Father Leonid was faced with the daunting task of fostering peace within the community, which had suffered through several years of turmoil as a group of parishioners left the parish to join the Russian Orthodox Church Outside of Russia in protest over the granting of autocephaly to the OCA by the Moscow Patriarchate.  Father Leonid was able to restore peace in the parish and move forward in its liturgical life, gradually adding English language to the services and adopting the “new” calendar to advance its missionary outreach.

Alongside his parish ministry, Father Leonid labored with faith and devotion for the Church at large, providing a strong witness for Orthodoxy on a global scale. When he arrived at the OCA Chancery in 1974, his work entailed assisting the Chancellor and providing support in many tasks. As the newly autocephalous OCA matured and became more visible, it was called to greater interaction with other Orthodox Churches, religious bodies of other faiths as well as ecumenical, political and humanitarian organizations.  Delegated by the Metropolitan, the Holy Synod and the Chancellor to represent the OCA in these interactions, Father Leonid’s ministry outside the parish became almost exclusively focused on external witness,  This work demanded more and more of his time and constant travel for many years to attend meetings and consultations around the world. Father Leonid succeeded Father John Meyendorff as Editor of The Orthodox Church (TOC), the OCA’s main official periodical. He served as TOC editor from 1985 until 2012.  His many activities for the Church worldwide entailed numerous absences from his family and parish.  Nevertheless, Father Leonid was able to keep his parish flock spiritually nourished and parish and family life in harmony.

Among the many organizations and initiatives, too numerous to list, that he was involved with in his witness for the Church were:

Father Leonid maintained constant communication for the OCA with all the Orthodox Churches throughout the world and facilitated many meetings and dialogues.  Particularly important were his personal contacts with the patriarchal administrations of the largest Churches – Constantinople and Moscow.

He received many awards from organizations and Churches around the world.  Most notably, the Holy Synod of the OCA awarded him the rarely given rank of protopresbyter in 2014 and the right to wear a miter in 2017.

Some of his editorials in TOC and other writings.A dynamic orator, Father Leonid was often invited to speak or preach to a variety of audiences both Orthodox and ecumenical.  He also contributed many articles to a variety of publications.  He wrote the concluding chapter in this well-known book on the history of Orthodoxy in North America.

Father Leonid is survived by his beloved Matushka Alexandra (Mimi) and his daughters, Sophia and her husband NIcholas Sluchevsky, and Maria and her husband Nicolas Megrelis, and five grandchildren – Theodore, Sophie, Alexander, Nicholas and Helena.

Since the repose of Protopresbyter Leonid Kishkovsky, the Orthodox Church in America and the Kishkovsky family have received many expressions of condolences.

The schedule of services for Father Leonid’s funeral was as follows:

Wednesday, August 11
12:00 PM: Arrival of the Body and Panikhida

7:00 PM: Funeral Service for a Priest

Immediately following the Divine Liturgy, Litya from the Panikhida and interment at Roslyn Cemetery.

Father Leonid’s family, with deep gratitude for the prayers and messages of condolence that they are receiving from around the world, asks that in lieu of flowers donations be made in memory of Father Leonid to two organizations that meant a great deal to him and with which he was actively involved for years:

May Father Leonid’s memory be eternal!