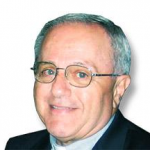 It is with a sense of sadness and celebration that I convey to you that OCL’s loyal advisory board member and my friend and advisor Deacon John Zarras has Fallen Asleep in the Lord – Sunday April 1 about 1:30 pm. Deacon John was a passionate supporter of the mission of Orthodox Christian Laity. He was a visionary planner for Orthodox Christian Unity. He joined the OCL movement formally as an advisory board member in 2000 and helped us plan the 16th Annual Meeting: “The Orthodox Christian Ministries Networking Conference.” He also helped me with so many details as we worked to put together the 22nd Annual Meeting: “The Road to Unity – From Vision to Action.” He was always a generous supporter of OCL’s efforts with his time, talent and resources.

His professional career was in the aviation industry, and he retired as an executive at age 63. After retirement, he attended St. Vladimir’s seminary to study theology. He was ordained to the diaconate in 2003. He was also a board member of the seminary and helped guide the building of its new library. He served on the strategic planning committee of St. Vladimir’s. He truly loved the seminary and helped make it a world class Orthodox Christian Theological School. He also served the Orthodox Church in America as a member of its Metropolitan Council and served on its planning committee. He was a Deacon of his local parish. Christ the Savior in Southbury, CT.

For at least 15 years, Deacon John and I discussed Orthodox Christian Unity. We welcomed the 1997 OCL Resolution on building an Autocephalous Church in North America. His Master of Divinity thesis at St. Vladimir’s Seminary was an essay on how to merge the various Orthodox Jurisdictions. As a professional executive in industry, he had acquired expertise on corporate mergers and applied some of these insights into corporate church life. He offered this study to the Assembly of Bishops after 2009 for their consideration.

Deacon John accomplished much in his life, but most of all he enjoyed his family. He truly was devoted to his wife and helpmate Evangeline who was a source of strength for him – especially these past three years. Together with their four children and 11 grandchildren, they helped John make the transition to Everlasting Life. His family was with him these last days singing and praying together. John died hearing the Triumphant Hymn – Christ Is Risen!

His family leaves us inspired at this Holy Time of the year to remember the memory of John with dignity, joy and love. He brought his son Peter to our advisory board, and we look forward to continuing our relationship with him. To all the Zarras family, immediate and extended, we pray that his Memory be Eternal! He will still be with me edging me on as he will be with you. May we all live long lives to remember John. He was a good and faithful servant.