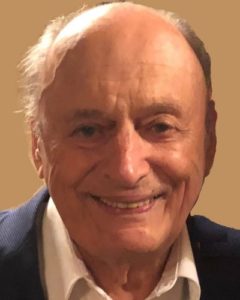 William was born and raised in Milwaukee, Wisconsin, the son of Greek Immigrants, George and Calliope. After graduating high school, he attended and graduated from the University of Wisconsin with a degree in Engineering. His studies were interrupted by his service in the U.S. Navy during World War II, serving in the Pacific Theatre. In 1956, he married Effie Tarachas and moved to Chicago, Illinois. His wife Effie died in August of 2000

He worked most of his career as one of the principles of Pollak and Skan, a consulting engineering firm that he eventually bought. Upon selling his company, he was soon involved with another venture, Visium Resources, to which he kept an interest until his 96th birthday.

He is survived by his three children Kathryn, George, and Michael. He has eight grandchildren and 12 great-grandchildren with two more due soon.

To send flowers to the family or plant a tree in memory of William George Karrys please visit our Tribute Store.

Bill Karrys was an early supporter of the Orthodox Christian Laity (OCL)  movement. Together with board member Michael Palmer, another IBM tech pioneer, they developed OCL’s financial management system.  Bill’s son Michael has assisted OCL in maintaining this system, and it is still in use today. Joanne Nikides, who recently retired after 20 years of service as OCL bookkeeper and accountant, maintains that it is an excellent system. Bill and Mike kept OCL on the cutting edge of using technology to manage our work.

Bill was a “renaissance man.”  He retired to Delray Florida and became involved with boating. He had his own boat and enjoyed being on the sea. He never lost interest in the Orthodox Church in Milwaukee and advocated maintaining its Frank Lloyd Wright architectural heritage. He and his family also contributed to the iconography of the Pantocrator looking down from the dome of Saints Peter and Paul in their home parish of Glenview, IL.

He lived a long and interesting life. May his memory be eternal.