BOSTON, MA – Metropolitan Methodios of Boston though a letter dated Oct. 11, 2011 has begun a second round of crisis at the historic Greek Orthodox parish of St. George in Lynn, MA. 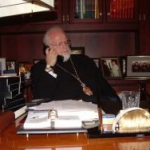 TNH File Photo Metropolitan Methodios of Boston though a letter dated Oct. 11, 2011 has begun a second round of crisis at the historic Greek Orthodox parish of St. George in Lynn, MA. He continues the controversy he started last December about a $20,000 increase to the parish’s annual contribution to the Archdiocese which the parish cannot afford and has refused to pay

He continues the controversy he started last December about a $20,000 increase to the parish’s annual contribution to the Archdiocese which the parish cannot afford and has refused to pay.

Through the letter, Methodios reinstated the sanctions against the parish and its priest, Rev. George Tsoukalas, which he had imposed last December 20. To Tsoukalas, Metropolitan Methodios admonished that on “December 20, 2010, I directed that you confine yourself to exercising your priestly ministry exclusively, in Lynn and not to participate in any church services in any Parish in the Metropolis of Boston. I also directed that no Orthodox Priest may participate in services in Lynn without my permission. Until further notice, you are to abide by that directive.”

Methodios explained the reasons for his decision as follows: “On May 31, 2011, I lifted the sanctions imposed on the Lynn Parish expecting that you and the Parish Council would abide by the final contained in the letter signed by Jerry Demetriou. In that letter, I offered once again to arrange for the Finance Committees from the Archdiocese to come to speak to a General Assembly of Lynn members, to present reports apprising the parishioners concerning the ministries of the Archdiocese and how they are financed. You have ignored this proposal, choosing rather to tell your congregation that ‘they won’ when I Lifted the sanctions”

Also on October 11 Metropolis Chancellor Rev. Theodore Barbas, who signs off simply as Father Ted, sent a confidential e-mail to the Metropolis clergy informing them that the sanctions against the St. George parish and Fr. Tsoukalas had been reinstated. TNH has learned that a number of priests communicated with parish families and told them about the Methodios’ recrudescence against their parish and priest. The parishioners are once again up in arms.

TNH has also learned that the majority of the parish has reduced contributions to the minimum while others do not give anything at all because they do not wish even a small portion of their donations to end up in Methodios’ hands.

The St. George parishioners might be feeling queasy as Metropolitan Methodios continues his rollercoaster policies regarding that church. After having removed sanctions for rejecting assessment increases, he has now reinstated them. 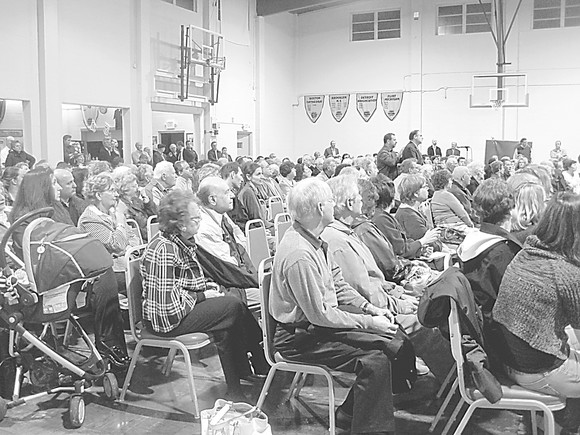 The St. George parishioners might be feeling queasy as Metropolitan Methodios continues his rollercoaster policies regarding that church. After having removed sanctions for rejecting assessment increases, he has now reinstated them.

Tsoukalas, who has been serving the parish for the last 17 years, did not respond to TNH’s request for comment. Priests who spoke to TNH on the condition of anonymity expressed concerns about Tsoukalas’ health, blaming Methodios “for arrogance and vindictiveness”. TNH’s requests for comment to Methodios and Archbishop Demetrios also remained unanswered.

The controversy started in December 2010 when the parish in at least two general assemblies unanimously refused to pay the $20,000 increase demanded by Methodios and the Archdiocese in support of the so-called “national ministries.” Methodios imposed sanctions on Tsoukalas and the parish, creating an ecclesiastical schism by not permitting the celebration of the marriage and baptism.

Tens of parishioners sent letters to Methodios criticizing the decision, including Philoptochos President Stacey Arabatzis, while numerous among the faithful wrote to TNH requesting that Ecumenical Patriarch Bartholomew remove Methodios from the Metropolis.

In a letter dated May 31, 2011 to Tsoukalas, Parish Council President John Meklis, and the parishioners, Methodios stated that: “The unfortunate controversy which has negatively affected your Community, Metropolis and Archdiocese these past six months must come to an end.” In another part of his letter he wrote, “I consider this unfortunate controversy ended. Upon receipt of this letter, sacraments may again be celebrated at the St. George Parish. Let us concentrate our efforts to restoring peace and harmony, and to healing the wounds which have hurt all of us.”

The clergy of the Metropolis of Boston had been asked to sign a letter against the parish and Tsoukalas, but 15 priests refused to sign it.

THE FALL OF TSOUKALAS

Prior to Tsoukalas’ appointment in 1998, St. George had limited connection and relationship with the Metropolis because it refused to accept the Archdiocesan charter. Tsoukalas’ appointment changed that drastically, and the parish was the first to respond after Tsoukalas convinced about 15 or 20 parish members to contribute $1,000 annually to the Metropolis’ special FOS Fund in addition to the 25% the Archdiocese returns to the Metropolis from the total sum of the allocations of the New England parishes. On the initiatives of Tsoukalas and prominent Greek-American businessman Tom Demakes – who is a trustee of Holy Cross School of Theology, an Archon of the Ecumenical Patriarchate, and Leadership 100 member – the parish organized fundraisers in support of its Theological School, amassing $100,000 or more on each occasion.

Tsoukalas had been close to Methodios, who appointed him chief judge of the Metropolis’ so-called Spiritual Court, which removed the Parish Council of the Transfiguration Church in Lowell because it refused to pay a big pay hike to its former priest who was transferred to another parish. But now things have changed completely. Methodios is no longer on speaking terms with Tsoukalas and in January sent him a letter blasting him and prohibiting him from visiting other parishes to participate in vespers, services, and sacraments. Methodios did not even allow Tsoukalas to participate recently in the funeral service of his long-time friend Fr. Emmanuel Metaxas of the Taxiarchae Church in Watertown, forcing Tsoukalas to sit in the congregation. Tsoukalas had served the Metropolis Chancellor, but was dismissed after his falling out with Methodios. Methodios refused to appoint him to another parish for a long time, and so Tsoukalas was forced to open a dry cleaning business to support his family.