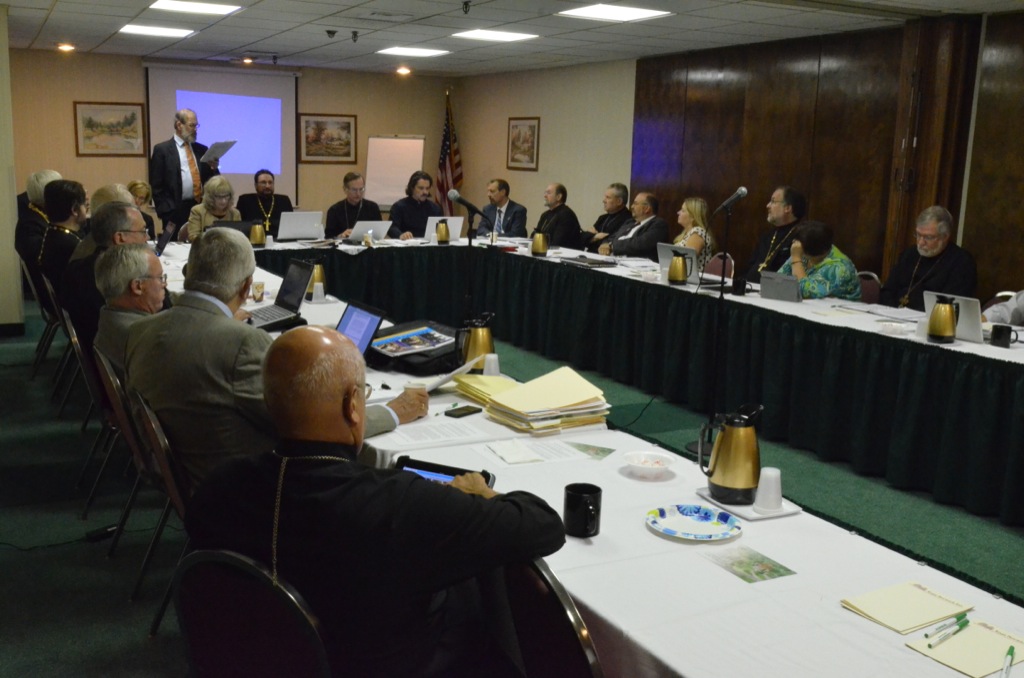 SYOSSET, NY [OCA] – The fall session of theMetropolitan Council of the Orthodox Church in America drew to a close on Thursday, September 26, 2013.

Metropolitan Council members participated in a full-day retreat led by Priest Nicholas Solak and Dr. Al Rossi on the topic of conflict resolution on Monday, September 23.  Council members were presented with a variety of techniques and methods to enhance communication and to identify and work through conflicts on the personal and group levels.

“It has been said that the past year has provided a period of calm and stability,” Metropolitan Tikhon said.  “Glory to God for such periods in our often turbulent and difficult lives. In my travels and pastoral visits throughout the OCA, I felt this calm and stability – but I have also felt the zeal and the energy of our clergy and faithful: zeal to do the work of Christ and the energy to sacrifice their own comfort and stability for the sake of the Kingdom. I have perceived a healthy violence that is waiting to take that Kingdom by force. It is indeed reflected in the reports that you have reviewed for this meeting, but even more so, it is found in the prayers, words and actions of all those who labor sacrificially for the spreading of the Gospel.”

Metropolitan Tikhon thanked the Chancery staff for their dedicated work and outlined the priorities established by the Holy Synod of Bishops.

Earlier in the day, Archpriest Eric G. Tosi, OCA Secretary, reported on a variety of personnel and operational matters.  He also provided an update on the new OCA web site and presented a plan to transform The Orthodox Church magazine into an annual journal, which was approved by Council members.

Alexis Liberovsky, OCA Archivist, presented a plan to form a top level advisory group to explore various options to upgrade the archives.  He added that grants were being explored to digitize the archives and pursue other means of preserving the invaluable resources.

Two departments offered presentations on their current and future ministries.  Department chairs report to the Council on a rotating basis.

Priest John Parker, who chairs the Department of Evangelization, spoke of future plans, while Priest John Vitko delivered the report of theDepartment of Christian Service and Humanitarian Aid on behalf of Donna Karabin, who was unable to attend.

Metropolitan Council committee chairs also offered reports, which will be available on the OCA web site in the immediate future.  The Strategic Plan committee also offered an update on progress made by the various work groups appointed after the 16th All-American Council and the integration of their work into the broader life of the Church.

Archpriest John Jillions, OCA Chancellor, reported on his work and priorities for the coming year, which include an examination of the manner in which the Church is funded.  He also related the results of his conversation with the diocesean chancellors and shared their observations and concerns.  He concluded by reviewing the work of ORSMA and SMPAC.

Cindy Davis, ORSMA Coordinator, outlined her work and offered updates on various current investigations, while Protodeacon Peter Danilchick reported on SMPAC’s work in advising the Holy Synod and ORSMA. He noted a number of issues and deficiencies that need to be addressed. He also reported on the status of the revised PSP (Policies, Standards and Procedures), expected to be approved and released after the fall session of the Holy Synod.

The Legal Committee and General Counsel reviewed various legal issues, in part in executive session, and offered their guidance.

Melanie Ringa presented a review of the 2013 budget, the results of the external audit, and proposals for the 2014 budget. According to the resolution of the 16th All-American Council, the assessment will be reduced to $92.00 per adult member—the second reduction in as many years.  In response, the 2014 income budget was reduced by $95,000.00, while budgeted expenses were reduced by $125,000.00, thereby realizing a balanced budget for 2014.  In addition to a reduction in expenses, the 2014 budget reflects a voluntary 5% pay cut for the Metropolitan and officers of the Church and a change in staff health insurance, which yielded a savings of an additional $34,000.00.

Father Eric presented the proposal for the 18th All-American Council, slated to be held July 18-25, 2015.  After much exploration and bidding, it was recommended that the Council be held in Atlanta, Georgia. The Council program will include a youth component while, for the first time, the annual convention of the Fellowship of Orthodox Christians in America [FOCA] will be held concurrently.  Recommendations for membership on the Preconciliar Commission were offered.  Two specific issues—a revision to the OCA Statute and alternatives for funding the Church—will figure prominently into the agenda.  The Holy Synod will review and approve the plans for the Council.

Prior to adjournment, Council members attended the Divine Liturgy, celebrated by His Eminence, Archbishop Benjamin of San Francisco and the West, in Saint Sergius of Radonezh Chapel on the occasion of its patronal feastday.

Additional meetings, including the Board of Theological Education, will continue on Friday, September 26.

A photo gallery can be viewed on the OCA web site  and Facebook page.