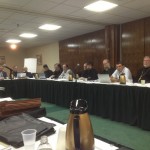 Members of the Metropolitan Council and the Lesser Synod of Bishops of the Orthodox Church in America held their fall session at the Chancery here Tuesday through Thursday, September 25-27, 2012.

The meeting was chaired by His Grace, Bishop Michael as the Administrator of the OCA.

According to Archpriest Eric G. Tosi, OCA Secretary, the following were among the highlights of the meeting.

Minutes and reports will be posted on the OCA web site as soon as they become available.