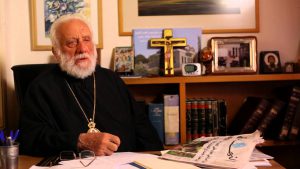 Arabic original here. Note that in Arabic, the word for “synod” and “council” is the same. For a succinct expression of a similar understanding of primacy by a medieval patriarch of Antioch, seehere. For more discussions of Antiochian ecclesiology, see here andhere.

It is the gathering  of the regional church, which they call the local church, and in most churches it is made up of their bishops. For example, the churches gathered around the patriarch of Antioch are called the Antiochian Church, those around the patriarch of Alexandria the Church of Alexandria, and so forth. The Orthodox have an Antiochian Church whose unity is represented by the patriarch and the bishops with their people. A group of people along with their spiritual leaders we call a church. Likewise, we call the Orthodox Church in the world a church. We do not have any administrative structure between the regional church, such as the See of Antioch, and the whole Orthodox world. In terms of dignity and essential existence, the churches are equal. Even if there is an organizational taxis, this absolutely does not mean that a given church submits to another church. In order to facilitate cooperation and communication, there has been an agreement explained by ecclesiastical canons since the fourth century whereby we announce the Ecumenical Patriarch first, but this does not mean that he has authority over the other patriarchs. In this sense, the Orthodox Church does not have an administrative center. There is only a taxis of dignity explained by the early councils whereby the Ecumenical Patriarch comes in honor only before his other colleagues if they gather together. This does not mean that he has any authority over them.

The church that we call local is led by a first among equals who has no authority outside the borders of his church. Unity between the Orthodox churches is a unity of faith and an ecclesiastical ordering in a specific taxis canonically since the fourth century, in which there is no executive matter of one patriarch being over another patriarch. Rather, it is based on consultation between the heads of autocephalous churches. According to what we know in history, if the heads of the Orthodox churches gather in friendship, it is because they submit to one set of rules in dogma and order. The Orthodox churches are one in dogma without even the slightest difference, one in order, and realistically one in the fundamentals of theological thinking. Administrative diversity, with the existence of administratively independent churches, never means difference in faith, worship, or cooperation between the clergy and the people. Orthodox unity is very manifest, despite the different administrations between Russians, Greeks, and Arabs. All the Orthodox speak with one voice and have one worship in all their regions and languages.

If the worldwide Holy Synod meets in the unity of the regional churches, then it will demonstrate true unity among us. We see unity in hearts, just as we see it in the process of coordination and cooperation between our churches. We do not look to unity in commands issued from above, but we see it in the Orthodox peoples’ receiving what their synods decide. For us, the synod is legitimate if all accept it.

The Holy Synod is not above the Church. It proceeds from her because she proceeds from Christ in the Apostles and tradition. It is true that the bishops have authority, but this is because they come from the holy people. If the synod of bishops departs from truth or right, then there can be no obedience to it. A system only has truth or right if it is a right from the Church. The council has no existence if it does not establish through its acts that that it is faithful to the Church.There is no one in the Church unless he is truly of her, that is, in the content of what he says. You are not above others merely on account of your position, unless you are of them in the content of what you teach.

From this perspective, the synod of bishops is not over the holy people. It is from them and its holiness is in them. If a bishop deviates from the tradition and practices of the Church, then he ceases within himself to be a bishop, even if he does not know it. In principle, the Holy Council is the place where the faithful know that if they come from it, they are coming from the Lord.