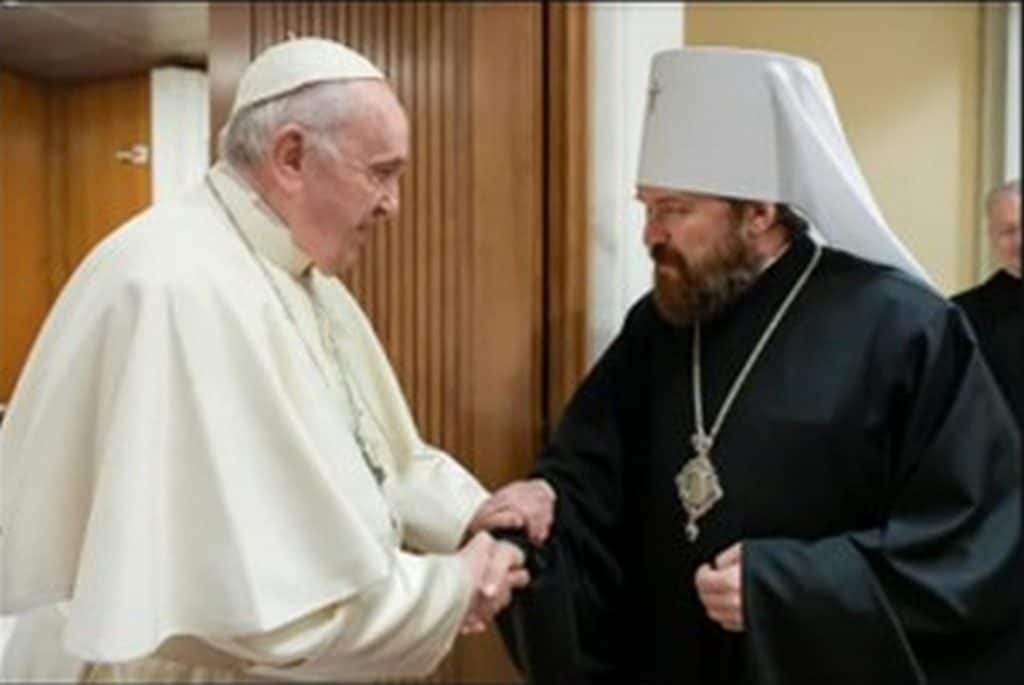 Metropolitan Hilarion has been released from his position as the Russian Orthodox Church’s chief ecumenical official, it emerged on Tuesday.

The 55-year-old had served as chairman of the Department for External Church Relations of the Moscow Patriarchate since 2009.

The theologian, Church historian, and composer is one of the most internationally visible figures in the Russian Orthodox Church. In the role sometimes described as the Moscow Patriarchate’s “foreign minister,” he met with Benedict XVI and Pope Francis.

The Moscow Patriarchate’s official website said on June 7 that the Holy Synod of the Russian Orthodox Church had decided that Metropolitan Hilarion would oversee the Diocese of Budapest and Hungary.

It explained that he “was released from his duties” as chairman of the Department for External Church Relations and as a permanent member of the Holy Synod, a position connected to his role as chairman.

The official website said that the next chairman of the Department for External Church Relations would be the 37-year-old Metropolitan Anthony of Chersonesus and Western Europe. It did not offer an explanation for the personnel changes.

In September 2021, he gave the opening catechesis at the International Eucharistic Congress in Budapest.

In December 2021, he met with Pope Francis at the Vatican. The meeting raised hopes of a second encounter between the pope and Patriarch Kirill of Moscow and All Russia, the leader of the Russian Orthodox Church. But the plans were abandoned following the full-scale Russian invasion of Ukraine.

Metropolitan Hilarion recently visited Hungary, where he met with Cardinal Péter Erdő, the Archbishop of Esztergom-Budapest and Primate of Hungary.

In an interview in January, on the eve of the all-out conflict in Ukraine, the Russian Orthodox official expressed opposition to war, citing the toll of previous battles.

“First, let’s remember at what cost did Russia win those wars. The price was millions of lives. Secondly, let’s recall that every war brings incalculable disasters to people,” he said.

“We must also remember that an outcome of any war is unpredictable. Can we assume that Russia won the First World War? Let’s remember the enthusiasm with which Russia entered it, what patriotic feelings accompanied the Russian Empire’s entry into this war. Could anyone then imagine that in three years Russia would collapse?”

“For all these reasons, I am deeply convinced that a war is not a method of solving the accumulated political problems.”

But Metropolitan Hilarion was later accused of failing to explicitly condemn the full-scale invasion of Ukraine.

He was suspended from his post as a professor at the University of Fribourg in Switzerland in March.

Mariano Delgado, the dean of the theology faculty, said he was disappointed that Metropolitan Hilarion did “not feel able to oppose Russia’s clear violation of international law.”

He added that it was “scandalous” that Patriarch Kirill had described Russia’s war against Ukraine as a “metaphysical” struggle.

The patriarch has faced intense criticism over his stance on the war and narrowly avoided being placed on a European Union sanctions list after reported opposition from Hungary, one of the EU’s 27 member states.

Orthodox Christian media had suggested that Metropolitan Hilarion was seeking to distance himself from Patriarch Kirill in recent months.