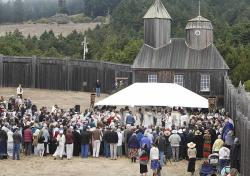 On August 25, 2012, with the blessing of His Holiness Patriarch Kirill of Moscow and All Russia, Metropolitan Hilarion of Volokolamsk, head of the Moscow Patriarchate’s department for external church relations, led the celebration of the Divine Liturgy at Fort Ross, the place of the first Russian settlement in California.

The liturgy was celebrated in the open, next to the reconstructed Russian Church of the Holy Trinity. Among His Eminence’s concelebrants were Metropolitan Hilarion of Eastern America and New York, the First Hierarch of the Russian Church Outside Russia, Archbishop Justinian of Naro-Fominsk, administrator of the Patriarchal Parishes in the USA, Archbishop Gabriel of Montreal and Canada (ROCOR), Archbishop Benjamin of San Francisco and the West (Orthodox Church in America), and Bishop Peter of Cleveland (ROCOR), Bishop Theodosius of Seattle (ROCOR).

Among numerous worshippers from Russia, USA, Canada and other countries were Metropolitan Gerasimos of San Francisco (Patriarchate of Constantinople) and Bishop Daniel of Dragovich (Bulgarian Patriarchate), as well as Russian Consul in San Francisco V. Vinokurov.

Following the Prayer Behind the Ambo, Metropolitan Hilarion addressed the congregation, saying in particular,

‘This place has a special importance for all of us. Already when driving up here, we can see this austere landscape with its ocean and mountains in which the telephone connection vanishes, and we feel as if in a different world, not in today’s prosperous America but in a place which has not yet been reached by the human civilization. It is difficult to imagine what this place looked like two hundred years ago when Russian manufactures chose this place to build a wooden fortress in it. Wherever Russian people came, in the first place they would build churches. It is because the Russian people have a special feeling of being close to God, a special feeling of their historical calling to propagate the Christian faith.

‘The Russian Orthodox Church has always been a multinational missionary Church. As soon as Russian missionaries set foot on the American land they began bearing witness to the Orthodox faith among the local population, first among the Aleutians in Alaska and then among Americans further south. Such outposts as Fort Ross served not only as a place for trade but also became missionary centers. And today, two hundred years later, such places are important for us first of all as centers for propagating Orthodoxy in the American land.

The great missionaries of the Russian land, such as St. Innocent (Veniaminov) and St. Tikhon, the future Patriarch of All Russia, worked here to build one Local Church. In their missionary efforts they were motivated by the sole desire to bring the light of the faith of Christ to as many people as possible regardless of their ethnic background or the language they spoke. Today’s Orthodox Church in America, though divided into several jurisdictions, has carefully preserved the legacy of the Russian missionaries and remembers them as pillars and founders of the Orthodox faith in this land’.

In memory of the 200th anniversary of Fort Ross, Metropolitan Hilarion presented the Church of the Trinity with an icon of St. Tikhon, Patriarch of All Russia.

He also presented high church awards to those who distinguished themselves in the work for the benefit of the Church. Consul V. Vinokurov was awarded the Order of St. Sergius of Radonezh, III class, and the leaders of the Fort Ross museum and benefactors were presented with Patriarchal Diplomas.

After the liturgy, there was a procession with the cross around the Fort Ross walls and to the Russian cemetery where the Prayer for the Dead was said. Commemorative tables were opened, bearing information about Russian settlers buried there.