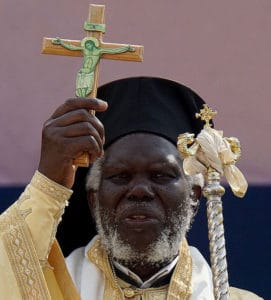 The Ugandan Orthodox Church was shaken yesterday to learn that its archpastor, His Eminence Metropolitan Jonah (Lwanga) of Kampala and Uganda, has reposed in the Lord, having suffered a heart attack following a long battle with cancer.

His Eminence reposed in Athens, where he had gone for medical attention and mission work, reports the press service of the Ugandan Church.

The Church’s Twitter page writes: “Our spiritual father has gone to meet the Lord!!! The Lion of the Patriarchate of Alexandria!!”

Social media is filled with messages of condolences and of love for Met. Jonah. The People’s Human Rights Forum writes that “He was an activist who always advocated for #HumanRights abuse, when [email protected] security operatives tortured, abducted, murdered and illegally imprisoned Ugandans. #Rip_BishopLwanga.”

A report on the site of the Patriarchate of Alexandria says of the departed hierarch: “The late Metropolitan was a great Hierarch of the Alexandrian Throne, a tireless worker and fighter for the spread of the Gospel in Africa. For 29 consecutive years as Hierarch of the Alexandrian Throne, he served the African Mission, continuing the work of the first Missionaries in Uganda, founding, among others, churches, schools, hospitals and Monasteries.”

May His Eminence’s memory be eternal!

The Patriarchate provides a brief bio:

The Late Blessed Elder Metropolitan Jonah of Uganda, Most Honoured and Exarch of Uganda, was born in 1945 in DDEGEYA. He completed his schooling in BULEMEZI and KYADDONDO in Uganda (1952-1964). He studied at the Ecclesiastical School of Crete (1964-1968). He holds a degree from the Theological and Philosophical Faculty of the University of Athens (1968-1978). He was ordained Deacon in 1981 and Priest in 1982. On 27th July 1992 he was consecrated Bishop of Bukoba. On 12th May 1997 he was elected Metropolitan of Kampala and All Uganda.

The Church lost a great hierarch this past weekend, as Metropolitan Jonah of Kampala and All Uganda fell asleep in the Lord. His Eminence dedicated his life to tirelessly sharing the Gospel in the midst of much hardship, and helped pave the way for the growth of Orthodoxy in East Africa.

Metropolitan Jonah was one of East Africa’s first African bishops, and the descendent of the founders of Orthodoxy in Uganda. Despite the difficulties he faced, he stood as an example of local leadership in the Church. He was the protégé of Archbishop Anastasios of Albania, with whom he worked closely when Anastasios was the acting archbishop of East Africa. He also worked closely with OCMC’s earliest missionaries in Africa, including OCMC executive director, Father Martin Ritsi.

“His Eminence was a tremendous mentor to me and all of our missionaries in East Africa, helping us minister within the local context of Africa. He was one of the first of a new generation of local African Orthodox leaders, and will be sorely missed,” stated Father Martin.

Metropolitan Jonah’s contributions to the Orthodox Church in Africa can’t be overstated, and we have been blessed to work so closely with him, sharing the light and love of Christ with so many, both in Africa, and around the world. May his memory be eternal!