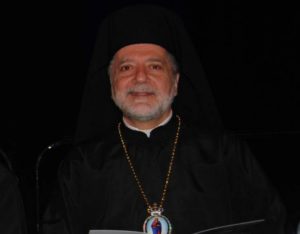 His Eminence Metropolitan Nicholas of Detroit at the Clergy Laity Congress in Boston. Photo: TNH/Theodore Kalmoukos.

DETROIT, MI – Metropolitan Nicholas of Detroit in an interview with The National Herald spoke about the recent Clergy Laity Congress in Boston, the budget which was voted again “unbalanced,” the finances of the Archdiocese, the St. Nicholas National Shrine, the Holy Cross Theological School, Archbishop Demetrios, and Autocephaly. He is the second Archdiocesan hierarch (Metropolitan Alexios of Atlanta was the first), to speak with TNH about these matters.

TNH: What are your thoughts about the recent Clergy Laity Congress?

MN: I was happy because we opened the issues of the financial difficulty and other issues that the clergy and the laity had to discuss. Something good came out of it because we entered the way of dialogue and cooperation.

TNH: If your congregants asked you what decisions you made, how would answer?

MN: For me the biggest decision was that we have to have transparency. Also, what was going to happen with the budget because the people of the executive committee were creating a balanced budget, at the end we finished with a deficit budget and that is exactly part of the problem.

TNH: How and why did the Archdiocese arrive at this dire financial situation?

MN: Some people say the archbishop, the Eparchial Synod, or the Archdiocesan Council is at fault, but we made the decisions on the information we were given.

MN: By the Archdiocese, by the people of the administration in terms the budgets and the finances.

TNH: You are a member of the Synod. Where have you been? Why you didn’t ask?

MN: We didn’t discuss it in the Synod. We were discussing the finances separately from the Synod. Some of the committee and Jerry Dimitriou would come up, and other people, and talk to us about the finances. The Synod dealt with finances along with the whole of the Archdiocesan Council. The Synod alone doesn’t make any financial decisions.

TNH: The Archdiocesan Council and Jerry Dimitriou didn’t tell you that there were financial problems?

MN: That I cannot answer. We saw it when the monies were not matching, some of the funds were taken, but we didn’t see that funds were taken from one account to cover the other account.

TNH: No one told you?

MN: No. Michael Psaros told you in his interview, the numbers that were given weren’t real, they weren’t correct.

TNH: Why was Mr. Dimitriou given all that power and responsibility?

MN: It was part of the system. I would suggest the other issue because it has an impact here: When Nicholas Bouras and Michael Jaharis were helping to cover additional expenses, we weren’t always made aware of that.

TNH: Archbishop Demetrios knew about it because many times he had asked for money from Jaharis and Bouras. Didn’t he tell you anything in the Synod?

TNH: What about in your Metropolis? Is all clear, are you transparent?

MN: Everything is clear here. Let me tell you, if I am going to spend more than a thousand dollars, I call and get the authorization from the president of the Metropolitan Council. We have two required signatures on every check, one clergy and one layman.

TNH: Why didn’t they have the same system at the Archdiocese?

TNH: You are a member of the Synod.

MN: Yes, but we don’t write checks in the Synod.

TNH: You should have known what was going on in the Church.

MN: We were hearing it in general when it became public. When the news starting coming, that is when everyone was seeing it.

TNH: How do you feel about the St. Nicholas National Shrine?

MN: I think everyone is concerned that it should be built, but there is also a concern of the cost because it is unclear how the cost keeps rising, now is up to $80 million.

MN: Yes, yes, there is a difficulty and part of it is the restructuring. We all inherited a system.

TNH: Who created the system?

MN: You tell me, it was there before us, before I got there. I can’t answer that.

TNH: Would you advise Archbishop Demetrios to obey Patriarch Bartholomew and submit his resignation, as he was urged to do?

TNH: What about the Theological School?

MN: That is another difficulty and you saw some of the people involved in the committees have expressed concern come from the Metropolis of Detroit as well. We are all concerned.

TNH: How do you feel about this Autocephaly talk?

MN: No one specifically is talking about it in the Metropolis of Detroit. I don’t even deal with the topic because my people generally don’t talk.

TNH: But how do you feel about it as a hierarch?

MN: Well this is a decision of the Church as a whole. We are under the Ecumenical Throne and it may come the time that the Ecumenical Throne in its wisdom would say: “children, bye-bye.” I don’t really deal with it. People are not talking about it, but they are concerned and the concern really is that the Mother Church be able to reflect and respond to needs that are in the United States and that is not always the same as what they see. Our realities are a little a bit different.