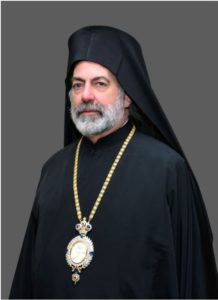 The Greek Orthodox Metropolis of San Francisco shares news of the unanimous decision of the Holy and Sacred Synod on June 12, 2019 announcing the election of His Eminence Metropolitan Nikitas of the Dardanelles as the Archbishop of Thyateira and Great Britain.

“AXIOS to my beloved brother and concelebrant in the Lord, Metropolitan Nikitas, for he truly is worthy of this honor,” stated His Eminence Metropolitan Gerasimos. “The Metropolis of San Francisco has been blessed with his presence for the past 12 years, and he has become an integral part of our family. His regular visits to our parishes, his paternal care for clergy and laity, and the depth of his faith have been an inspiration to us. We pray for the Lord’s abundant blessings as he embarks on this new and exciting chapter in his ministry.”

The Metropolis of San Francisco will honor Metropolitan Nikitas before he assumes his new responsibilities. Holy Cross Church in Belmont, CA, and Saint Anthony Church in Pasadena, CA, will be graciously hosting events, with proceeds supporting Metropolitan Nikitas in his new position as Archbishop of the Archdiocese of Thyateira and Great Britain. More details will be forthcoming.