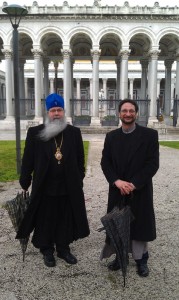 Metropolitan Tikhon and Father Eric at the church of “St. Paul Outside the Walls,” where St. Paul’s tomb is located

SYOSSET, NY [OCA] – His Beatitude, Metropolitan Tikhon is one of a number of Orthodox hierarchs slated to attend the Inauguration of Pope Francis in Rome on Tuesday, March 19, 2013.

Representatives from most of the Orthodox Churches will be present, including His All-Holiness, Ecumenical Patriarch Bartholomew of Constantinople.

Following the Solemn Mass of Inauguration in Saint Peter’s Basilica on Tuesday morning, Metropolitan Tikhon, who is being accompanied by Archpriest Eric G. Tosi, Secretary of the Orthodox Church in America, will attend a lunch for the delegations hosted by Kurt Cardinal Koch, President of the Pontifical Council for Promoting Christian Unity.

At their spring session, members of the OCA Holy Synod of Bishops “agreed that the OCA’s delegation would be Metropolitan Tikhon and the Chancellor,” Archpriest John Jillions, OCA Chancellor, said.  “Unfortunately for me, an unexpected glitch with my passport renewal meant that a quick change had to be made, with Father Eric accompanying His Beatitude. They left late Sunday night and will be met in Rome as official guests of the Vatican.”

On Wednesday morning, March 20, Metropolitan Tikhon and Father Eric will join members of all visiting delegations for an audience with Pope Francis.