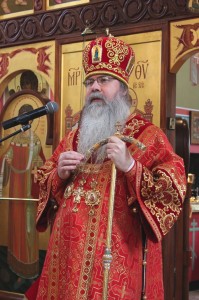 On Sunday, November 18, 2012, His Beatitude, Metropolitan Tikhon, presided at the Divine Liturgy at Saint Nicholas Cathedral here for the first time since his election as Primate of the Orthodox Church in America and Archbishop of Washington, DC at the 17th All-American Council.

A festive luncheon in Metropolitan Tikhon’s honor followed in the cathedral hall.