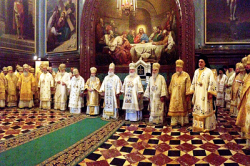 MOSCOW, RUSSIA [OCA] – His Beatitude, Metropolitan Tikhon, was among the Primates and representatives of the Local Orthodox Churches who concelebrated at the Divine Liturgy with His Holiness, Patriarch Kirill of Moscow, at Christ the Savior Cathedral here on July 24, 2013. The Liturgy opened a three-part commemoration of the 1025th Anniversary of the Baptism of Rus’ that will be marked with similar celebrations in Kyiv, Ukraine and Minsk, Belarus. [See related story].

At the conclusion of the Service of Thanksgiving that followed the Liturgy, Patriarch Kirill shared a message issued by the Holy Synod of the Russian Orthodox Church highlighting the legacy of Saint Vladimir, who in 988 AD embraced Orthodox Christianity for his people, and its importance today.

“A quarter of a century has passed since the beginning of the revival of the Russian Church,” the message read.  “Over the years, the renovation and building of tens of thousands of churches and hundreds of monasteries has revived the Church and placed her activities on a solid foundation in many areas….  We give our heartfelt thanks to God, Who is the Lord of history, for the grace that has been revealed to our people….  However, much remains to be done, because the Lord wants us to bear new fruits.  And chief among them should be the unity of faith and life, the assertion of the truth of the Gospel in words and deeds….”

Patriarch Kirill also extended warm greetings to the numerous state and religious officials present for the Divine Liturgy, including the Presidential Envoy to the Central Federal District, A.D. Beglov, and the Vice Prime Minister of Ukraine, Konstantin Grishchenko.

Patriarch Theodoros of Alexandria offered congratulatory remarks on behalf of the Primates and the delegations representing the Local Orthodox Churches.

A reception for the Primates and delegations and state, religious, NGO and diplomatic representatives followed, during which Patriarch Kirill expressed his deep gratitude for their presence and participation.