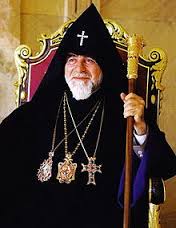 Karekin II, Supreme Patriarch and Catholicos of All Armenians

SYOSSET, NY [OCA]  At the invitation of the His Holiness Karekin II, the Supreme Patriarch and Catholicos of All Armenians, His Beatitude, Metropolitan Tikhon and a delegation from the Orthodox Church in America, will arrive in Armenia on Tuesday, April 21, 2015, where they will participate in the commemoration of the 100th Anniversary of the Armenian Genocide in the Ottoman Empire during World War I.

Metropolitan Tikhon will be among the heads and representatives of Churches and presidents, prime ministers, and others who will participate in the commemoration, as well as the glorification of Armenian Martyrs at the Cathedral of Holy Etchmiadzin, the seat of the Armenian Apostolic Church.

“Many states and governments have recognized the mass killings of 100 years ago as genocide, while other governments—among them the US—have not formally acknowledged the mass murders as such,” explained Protopresbyter Leonid Kishkovsky, OCA Director of External Affairs.  “Recently, Pope Francis spoke of and prayed eloquently about the Armenian Genocide at Saint Peter’s Basilica in Rome, causing a harsh response from the government of Turkey.

“The moral judgment of many is that the Armenian Genocide opened the door of the 20th century to mass murder, genocide, and holocaust, as witnessed in Germany, the Soviet Union, China, Cambodia, Rwanda, and elsewhere,” Father Leonid added.  “Today’s mass murders of Christians in the Middle East and North Africa continue this sad and criminal narrative.”

Father Leonid added that “other Christian populations in the Ottoman Empire at the time—such as the Syrian Orthodox—also were murdered in large numbers.”

The Armenian Apostolic Church—one of several that are collectively referred to as the Oriental Orthodox Church—is the world’s oldest national Church, inasmuch as it was the first nation to embrace Christianity as its official faith in 301 AD.  It traces its origins to the missions of the apostles Bartholomew and Thaddeus.  During Soviet times, it was severely persecuted by the communist regime, but it has experienced an intense renewal after the fall of communism.

On April 25, Metropolitan Tikhon and the OCA delegation will travel to the Republic of Georgia, in line with the tradition of visitations to sister Orthodox Churches by newly elected Orthodox Christian Primates.  They will be received by His Holiness and Beatitude Ilia II, Catholicos and Patriarchate of All Georgia and Archbishop of Mtskheta and Tbilisi, who has visited the Orthodox Church in America on a number of occasions in past years.  The OCA and the Church of Georgia have always maintained a close relationship, and the latter was one of the first churches to recognize the autocephaly of the OCA.

The Church of Georgia—the sixth of the world’s autocephalous Orthodox Churches—traces its origin to the early fourth century evangelistic mission of Saint Nino, Equal to the Apostles, in the region of what is today the Republic of Georgia.  The Church faced numerous challenges during its 1700 year history due to a variety of issues.  Though an ancient Church, it became an exarchate of the Russian Orthodox Church when the Russian Empire absorbed the Kingdom of Georgia.  After the Russian Revolution, it regained its autocephaly and was recognized by the Russian Orthodox Church in the 1940s.  The Georgian Church, like the Russian and Armenian Churches, experienced persecution by the Soviets and also has experienced a revival after the fall of communism.