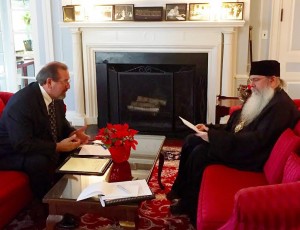 OCCIF is dedicated to providing low interest loans to assist Orthodox Christian parishes, missions, monastic communities and institutions acquire, build, remodel and refinance properties in order to further the mission of the Church.  The organization accomplishes its mission through donations, and especially through parishes pooling their resources and lending capital, for which they receive interest.

The work of OCCIF, which was initiated as a project in collaboration with the Orthodox Church in America’s Diocese of the West, was showcased at the 18th All-American Council in July 2015.

In an endorsement letter, His Eminence, Archbishop Benjamin of San Francisco and the West said, “By loaning capital to OCCIF, parishes make it possible for the organization to lend capital to fund construction projects.”

Mr. Della Monica reported to Metropolitan Tikhon that OCCIF is now expanding to meet needs across the US while working closely with the Church is an independently registered federal 501(c)(3) charity.

Additional information may be found on OCCIF’s web site.