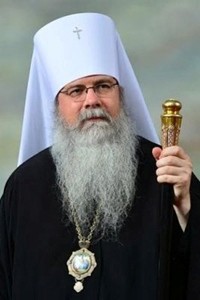 SYOSSET, NY [OCA]  In a letter addressed to the Primate of the Coptic Orthodox Church, His Holiness, Pope Tawadros II dated February 17, 2015, His Beatitude, Metropolitan Tikhon, expressed condolences and offered prayers on behalf of the Holy Synod of Bishops and the clergy and faithful of the Orthodox Church in America on the martyrdom of 21 Egyptian Coptic Christian men whose beheadings by IS forces were confirmed by the Libyan and Egyptian governments on February 14.
Earlier, it had been reported widely that the Copts, who had sought employment in Libya, had been arrested by IS forces shortly after the beginning of the year.

The text of Metropolitan Tikhon’s letter appears below.  A PDF of the letter may be found here.

Letter of Metropolitan Tikhon to Pope and Patriarch Tawadros II

The recent beheading of Coptic Orthodox Christians in Libya has brought pain to the hearts of all who respect human life and dignity.  Indeed, all who affirm religious faith see this crime as a cruel assault on authentic religious faith.

On behalf of the Holy Synod of Bishops of the Orthodox Church in America and on behalf of the clergy and laity of our Church, I express to you and the entire Coptic Orthodox community our love, sympathy and condolences.  We are requesting the faithful of the Orthodox Church in America to offer commemorations for the souls of those who have been murdered in Libya and to offer prayers for the Coptic Church and for the Egyptian nation.

We witness the solidarity of the Egyptian nation with the Coptic community at this time, and pray to Almighty God that this solidarity of Egyptian Muslims and Christians may be a new time of tolerance and religious peace in Egypt and in the entire region of the Middle East.

With love in the Lord,

+ Tikhon
Archbishop of Washington
Metropolitan of All America and Canada