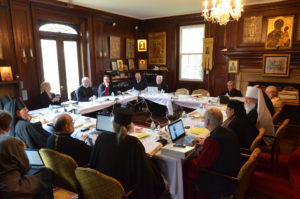 SYOSSET, NY [OCA]  His Beatitude,  Metropolitan Tikhon, opened the Spring 2018 Session of the Holy Synod of Bishops of the Orthodox Church in America at the Chancery here on Tuesday, April 17, 2018.

Metropolitan Tikhon began the day by celebrating the Divine Liturgy for the “Day of Rejoicing” in the Chancery’s Saint Sergius of Radonezh Chapel, after which he welcomed the members of the Holy Synod during the opening session and delivered his address.

During the Spring Session, which will conclude on Friday, April 20, the hierarchs will offer reports on their respective dioceses, review awards for clergy and lay persons, and finalize plans for the forthcoming 19th All-American Council, slated to convene in Saint Louis, MO July 23-27, 2018. 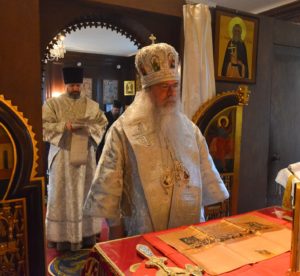 “Other reports and discussions include those of the Chancellor, Secretary, Treasurer, Legal Counsel and the Office of External Affairs and Interchurch Relations,” said Archpriest Eric G. Tosi, OCA Secretary.  “Members of the Department of Liturgical Music and the Department of Youth, Young Adult and Campus Ministry also will meet with the Holy Synod to update its members on their work.  The Synod will review and bless the proceedings of the 2018 Spring Session of the Metropolitan Council and meet with the seminary deans.”

Reports will be offered by the Office of Review of Sexual Misconduct Allegations on the implementation of the “Policies, Standards and Procedures of the Orthodox Church in America on Sexual Misconduct” in parishes, institutions and dioceses.  An update on the work of the committee on the Spiritual Abuse Resolution, adopted after the 18th AAC, also will be given.  Among other matters to be considered by the Holy Synod is a review of candidates for ordination through the Diaconal Vocations Program, as well as clergy cases requiring canonical review.  Plans for the celebration of the 50th Anniversary of the granting of Autocephaly and the Canonization of Saint Herman of Alaska in 2020 also will be discussed and a committee to oversee the events will be established. 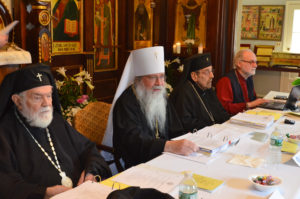 The members of the Holy Synod also will host a dinner with 2018 seminary graduates and discuss with them expectations on parish life.