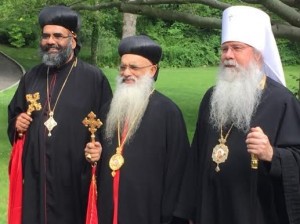 SYOSSET, NY [OCA] At the invitation of the Malankara Orthodox Syrian Church, His Beatitude, Metropolitan Tikhon, will deliver an address during the bicentenary valedictory celebrations of the Orthodox Theological Seminary in Kottayam, Kerala, India on Thursday, November 26, 2015.  [Read related story].

Metropolitan Tikhon also will speak at ceremonies that will be held in remembrance of the seminary’s founder, the late Metropolitan Joseph Mar Dionysius.

Metropolitan Tikhon and Fathers Steven and John also will attend ceremonies marking the opening of the Malankara Church’s Sopana Academy for Studies in Theology and Culture.

The ancient Malankara Church traces its origin to the Apostle Thomas.  Headquartered in the southern Indian province of Kerala, it numbers about 1000 parishes in India and another 200 parishes in North America.