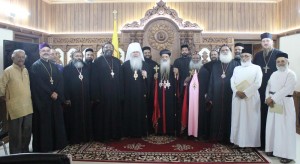 At the invitation of His Holiness, Marthoma Paulose II, Catholicos of the Malankara Orthodox Syrian Church [also known as the Indian Orthodox Church], His Beatitude, Metropolitan Tikhon journeyed to India during Thanksgiving week 2015 to participate in celebrations marking the 200th Anniversary of the Orthodox Theological Seminary here.

The ancient Malankara Church traces its origin to the Apostle Thomas. Headquartered in the southern Indian province of Kerala, it maintains about 1000 parishes in India and another 200 parishes in North America.

On Tuesday, November 24, Metropolitan Tikhon and Fathers John and Steven attended the Holy Qurbana [Divine Liturgy] and memorial service for Metropolitan Pulikottil Joseph Dionysius II, the seminary’s founder, and Metropolitan Dr. Paulose Mar Gregorios of Delhi on the 199th and 19th anniversaries of their repose respectively. Catholicos Paulose celebrated the Liturgy in the Old Seminary chapel, in which the late hierarchs are interred, after which Metropolitan Tikhon addressed the gathering.

“We are grateful to be here at the invitation of your Holiness,” said Metropolitan Tikhon, noting his appreciation for the opportunity to be introduced “to the vibrant life of your apostolic Church, built on the witness of the Apostle Thomas in this land. It is a privilege to be with you, as well to honor the memory of the seminary’s founder, Pulikottil Joseph Dionysius II, Malankara Metropolitan, and the late Paulose Mar Gregorios, who as Metropolitan of Delhi, as Principal of the seminary and as a longtime representative to the World Council of Churches contributed profoundly to the cause of peace, justice and inter-Christian understanding.  By God’s grace and through the prayers of the saints of both our lands, may these days together strengthen our bond of peace and produce increasingly closer practical cooperation between our seminaries and our churches.”

On Tuesday afternoon, Rev. Dr. K. M. George, Director of the Sopana Academy for Studies in Theology and Culture, welcomed Metropolitan Tikhon and Fathers John and Steven at ceremonies marking the school’s inauguration, at which Catholicos Paulose also presided.

In his address, Metropolitan Tikhon observed that, with its long history and experience in a multicultural and pluralistic society, the Malankara Church is in a unique position to promote study and reflection on how theology and culture have interacted historically and to discern how they might relate today for the common good of society.

“Christianity from the beginning was able to hold in tension two poles of the Christian Gospel in relation with the world and its cultures,” Metropolitan Tikhon said. “On the one hand, the entire premise of Christian revelation is that ‘God so loved the world’ [John 3:16]. He entered fully into its life, suffering and death in order to transform it from within and to restore to creation and culture the possibilities of divine-human communion that were ours at the beginning. Our scriptures, our liturgical services and our saints’ lives are filled with this deep sense of God’s love for the world.”

Quoting 1 John 2:15—“Do not love the world or the things in the world. If anyone loves the world, the love of the Father is not in him”—Metropolitan Tikhon went on to say that “the Orthodox tradition witnesses equally to this ascetic dimension as it looks out on a creation and cultures that for all their indestructible goodness still remain deeply flawed, fallen and in need of healing,” adding that the Apostle John holds both of these poles in tension. “He can say, ‘For God so loved the world,’ and he can also say, ‘Do not love the world.’ And like the Apostle John, the Apostle Thomas and all the saints after them, it is a holy life in Christ that keeps the poles in balance. And therefore, it seems to me that one of the most effective ways to study theology and culture is to examine the vast variety of saints in each culture, to see how sanctity has found a place in each culture even while challenging that very culture.”

Citing the example of various Indian and North America saints, Metropolitan Tikhon concluded by saying that the saints are “models for bridging theology and culture. This great cloud of witnesses, each in their own unique ways and in their own times and places, uniquely appropriated for themselves the shared tradition of the life in Christ they received. Through their prayers, may your work and witness – Father K. M. George and your colleagues – and that of the Sopana Academy for Studies in Theology and Culture be fruitful and multiply. May God grant you many blessed years.”

Metropolitan Tikhon and Fathers John and Steven were received by Catholicos Paulose at the headquarters of the Malankara Church on Wednesday, November 25. After expressing gratitude for the opportunity to experience the life of the Church in India for the first time, especially in conjunction with its major celebrations, Metropolitan Tikhon told the Catholicos that “it is humbling, as representatives of a young missionary Church from America, to be immersed in the life of a Church shaped by 2000 years of history and the witness of the Apostle Thomas, who walked this land and whose relics are here. Our churches are not yet in full communion, but by God’s grace and the prayers of Saint Thomas, may we recognize each other as having the same experience that inspired Saint Thomas to say, ‘My Lord and my God.’”  They also were afforded the opportunity to venerate the relics of the Apostle Thomas.

After a meeting with members of the Kottayam Seminary faculty, Fathers John and Steven joined Father K. M. George in offering presentations at a symposium for the seminary students. Later the same day, Metropolitan Tikhon was present as the Malankara Church’s new web site was launched. He was “impressed that this ancient Apostolic Church with deeply rooted traditions is equally up-to-date with technology and social media.” In remarking how communication has always been “an essential part of the Church’s mission to witness to faith in Christ—in the first century the letters and Gospels of the New Testament began as an exercise in innovative communication”—he commended Catholicos Paulose for blessing this ministry and congratulated those who labored to bring it to fruition.

On Thursday, November 26, Metropolitan Tikhon and Fathers John and Steven were among the honored guests attending celebrations marking the 200th Anniversary of the Orthodox Theological Seminary in Kottayam. Catholicos Paulose opened the ceremonies, after which Kerala Governor P. Sathasivam spoke of the important role the seminary has played in the region’s educational life while imparting education in English, Latin, Syriac and Sanskrit.

“It is a joy and an honor to be with you today for the culmination of your celebration of the Bicentenary of the Theological Seminary in Kottayam,” said Metropolitan Tikhon in his address. “I am deeply grateful for the invitation your Holiness extended to me and to the Deans of the two seminaries of the Orthodox Church in America to be part of this historic occasion. This helps solidify our growing collaboration in assisting you in training clergy and teachers for your Church in North America. We are working well with Metropolitan Nicholovos, whose headquarters are close by to our own in Long Island, New York. He has been a valuable member of the Saint Vladimir’s Seminary Board of Trustees…. We also offer our deep appreciation for the opportunity that has been afforded our seminaries to contribute in a small way to the education of so may of your students, who themselves have brought to us an abundance of blessings as well.

“I should note that in the United States today is a major national holiday—Thanksgiving Day,” Metropolitan Tikhon continued. “This harkens back to the early days of the Pilgrim settlers in Massachusetts, to which they fled from religious persecution in Europe. They had a difficult first winter, with cold and disease, and many died. But with the help of native Americans they survived, and the next autumn after the harvest they gave thanks to God.

“Considering your own experience of the seminary for over two hundred years, there will have been many occasions of struggle,” Metropolitan Tikhon noted. “And there is also great joy as you look at the cloud of witnesses, the thousands of clergy who have touched countless lives in their service to Christ and the Church. Most especially among these is the seminary’s founder, Metropolitan Pulikottil Joseph Dionysius II. I join you in giving thanks to God for everything and for everyone in these two-hundred years, ‘knowing that in everything God works for good with those who love Him, who are called according to His purpose’ [Romans 8:28]. May God bless you and strengthen you for many more years!”

Before leaving India on Friday, November 27, Metropolitan Tikhon told the Catholicos that he looks forward “to a deepening relationship between our seminaries, our churches and our people. I offer my humble prayers for your Church and ask in turn that you would pray for me and for the clergy and faithful of the Orthodox Church in America.”