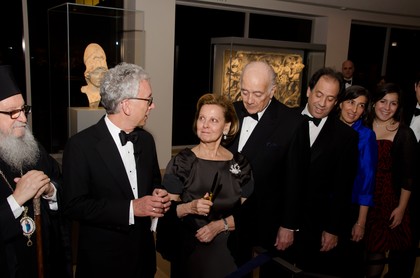 The Art Institute Of Chicago

by Constantine S. Sirigos
Special to The National Herald

NEW YORK – The new Mary and Michael Jaharis Galleries of Greek, Roman and Byzantine Art at the Art Institute of Chicago were introduced to the art world, the city of Chicago, and the Greek-American Community with a special preview and gala dinner on Saturday evening, November 10.

Friends, including Archbishop Demetrios of America traveled, from New York and points more distant to congratulate and thank the Jaharis family for their latest philanthropic offering in the form of new spaces in American’s leading museums dedicated to the presentation and appreciate of the art and spirit of the Greco-man and Byzantine world.

The Art Institute, where Mary Jaharis studied, joins New York’s Metropolitan Museum of Art as a beneficiary of their generosity and commitment to art. Michael Jaharis, a Chicago native, was also thrilled to make a gift his hometown.

The Archbishop offered the invocation, assisted by Deacon Aristides Garinis. He also called upon God to Bless the Jaharis family, and all who dedicate their lives to “the beautiful” through their noble work at the world’s museums and related institutions

The guests were welcomed by the Art Institute’s director, Douglas Druick, who also acknowledge the presence of the British Ambassador to the US, Sir Peter Westmacott, Metropolitan Iakovos, the Greek Consul General Ioanna Efthymiadou. The Met was represented at the gathering by its President, Emily Rafferty and Dr. Helen Evans, the Michael and Mary Jaharis curator for Byzantine art.

Druick highlighted the Jaharises philanthropic endeavors, which range from art and religion to biomedical research. He expressed the appreciation of the Art Institute, saying “their generosity has allowed us to reconceive of an important part of our collection in a way never before possible.” He said the gift will also support their acquisitions, exhibitions and educational programs.

He concluded by quoting Pericles that “what you leave behind us not what is engraved in stone monuments but what is woven into the lives of others. The creation of the Michael and Mary Jaharis Gallery means that the art of the ancient Mediterranean world will be once again, reflecting the vision of the founders of the Art Institutes, will weave its way into the lives of our visitors.

Archbishop Demetrios stressed the importance of the example set by the Jaharis family. He revealed that they wished at first to remain anonymous, but they were persuaded that their names will encourage and inspire other donors – as was the case – for which he bestowed the title “Mega Benefactors.” The Archbishop also recounted the diversity as well as the generosity of the family’s donations, but he placed special emphasis on their support of the arts.

He noted that art does not merely help bring the past to life, but has the added value of displaying the beautiful aspects of the ancient world. “Art doesn’t show the pain, the failures, the nasty parts of life,” he said. By connecting history with beauty, art offers an inspiring image of the positive aspects of humanity, weaving a spiritual thread from the past, through the present to the future.

The Archbishop said art gives humanity access to “another reality that is the true reality,” so that people who visit museums are “are inspired, they are enhanced,” shedding light on the saying of the novelist Fyodor Dostoyevsky that “beauty will save the world.”

Father Alexander Karloutsos, Protopresbyter of the Ecumenical Patriarchate, told The National Herald that “the significance of this night, is derived not only from the Hellenic tradition, but from the Orthodox tradition. Orthodoxy means the true glory of God, but there is also Orthopraxy – practicing that glory. What Mary and Michael Jaharis have done is to turn words into action, expressing the great Hellenic spirit and the ideal of the pursuit of excellence, embodied in the beautiful structure they created, a celebration of our faith and our heritage.”

It was indeed a celebration, and in addition to the feast of beauty, they guests also partook of a beautiful feast in one of the museums elegant modern spaces, entertained with Greek music played by the Hellenic 5 band.

The evening began with a reception in the museum’s lobby after which guests were conducted through the Alsdorf Gallery, which features art from South and Southeast Asia. When they reached the remarkable new spaces created for the Jaharis gallery, guests encountered the inaugural exhibition “which includes 51 works of late Roman and early Byzantine art loaned by the British Museum, many of which have never before traveled to the United States.”

Art that is more than 4,000 years is found among more than 550 works, including life-size marble sculptures of goddesses, portraits of emperors and empresses, ancient Greek pottery, jewelry and silver tableware. 150 items were loaned from other museums in the US and abroad and some were loaned by private collectors.

The works of art on display enable visitors to get sense of the evolution of art during the transition from the worship of the Olympian deities to Christianity.

Some of the most striking pieces include a sarcophagus from the 2nd century AD with a depiction of the abduction of Persephone, a statue of Sophocles, and a 6th century AD ivory plaque of the adoration of the Magi from 6th century Constantinople.