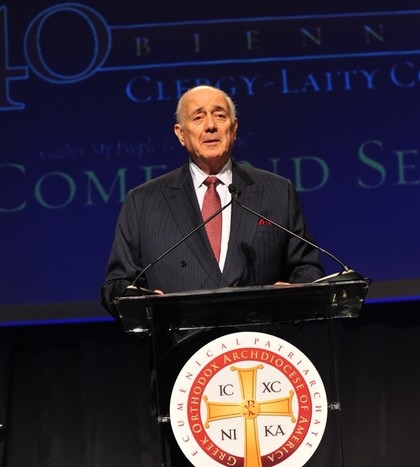 By Theodore Kalmoukos
Translated from the original Greek

BOSTON, MA – Michael Jaharis, Vice Chairman of the Archdiocesan Council of the
Greek Orthodox Archdiocese of America, addressed the body in its last meeting in diligent and documented way about the essential and serious administrative problems of the Archdiocese.

Initially, Jaharis had planned to deliver his speech at the 41st Clergy-Laity Congress in Phoenix, AZ last July, but a sudden minor health issue forced him to return to New York. Concerning the present administrative structure of the Archdiocese with the elevation of the bishops to rank of metropolitans, and, consequently, the Diocese into Metropolises, Jaharis be lives that “there needs to be a clarification of certain items within the Church’s Charter.”

Specifically Jaharis said “if you will recall [following the departure of Archbishop Spyridon and]prior to the election of His Eminence Archbishop Demetrios, the Patriarchate elevated our Bishops of each Diocese to Metropolitans of the Throne, which theoretically at least could imply reporting to the Patriarchate and not to the Archbishop. To me, and I wish to underline that this is my personal view, this was creating the potential risks of undermining the unity as well as the ultimate authority and effective administrative function of the Church in the United States. As a result, a new Charter was requested and given to us that redefined the role of a Metropolitan of a Metropolis that is part of the Greek Orthodox Archdiocese. And while this was thought to be sufficient to clarify the role of the Archbishop as the ultimate decision maker, the intervening years and the existence of a decisive Eparchial Synod in our Archdiocese have indicated the need for further clarification which I believe can be made with more precise interpretation or a minor change in some items of the existing Charter.”

Jaharis also spoke about the withering situation that exists at Hellenic College and Holy Cross Greek Orthodox School of Theology (HCHC). He said that “the Archdiocese was recently requested to review and assist HCHC in view of a pressing financially problematic issue that created the potential for significant monetary and or property losses. After such review, it became apparent to me that poor decision making [whether it was due to lack of sufficient information or knowledge]and the lack of the fundamental cushion or foundation of a strong organizational Endowment were the causes of the problem. Why am I raising this issue? For the obvious reason, that HCHC is an essential component ensuring the Church’s existence in the USA and should not have been so vulnerably exposed to such a risk. The Church cannot grow without a strong and stable higher educational institution to train the future clergy. A strong School is a significant contributor to a strong Church. Consequently we have asked an exceptionally talented group of leaders within the Archdiocese Financial Committee, in cooperation with the officers of the School, to review the details of the specific problem and related issues so that they can make realistic recommendations on this and other aspects that they may judge need changes.”

Jaharis provided practical advice and recommendations based on his own “professional experiences as well as philanthropic experiences on Boards of other universities and educational institutions.” He said “I am suggesting a much smaller Board of Directors including not only local Massachusetts residents required by state law, but at least one (or two) experienced representatives from each Metropolis to constitute a more effective new Board.

“The selection of a proven group of people with experience in the best practices of
fundraising and institutional advancement to create a strong Development Department, which can help the School establish a significant Endowment – including, for example, among other things a review of past restricted donations to determine the possibility and requirements for of removing such restrictions if they are no longer practical or valid. A major campaign in each Metropolis to indicate the absolute necessity and responsibility for each parishioner and Metropolis to assist in the financial viability of the School, which may also help with the national admissions recruitment strategy of the school.”

Jaharis spoke about the monasteries which he called it “a regrettable and most distasteful subject, i.e., the current status of monasteries in their relationship with the Church.” He said that “in the United States, the monasteries fall within the scope of the Charter and have certain obligations not unlike those of each Metropolis and each Parish. Over the years, it has become regrettably noticed that with respect to many monasteries, the tendency was to flout its obligations under the Charter and to go beyond the traditional role of the monastic ideal.”

Jaharis also said that “some time ago, a committee was formed to review and examine several such matters and persisting rumors. Suspicions, however, of irregularities and of existing improprieties, and lack of cooperation, made it impossible for the committee to further act beyond initial observations.”

He made reference to a death last June of 26 years old novicemonk Scott (Ioannis) Nevins in a short distance outside of the St. Anthony the monastery in Arizona. He said that “lastly, as a result of a recent horrible fatality of a young person in the immediate area of a monastery in Arizona, we feel compelled to take extraordinary measures to determine the bizarre circumstances surrounding that fatality. Following a complete and objective investigation and in conjunction with the expected report by the local police, we expect to take severe and appropriate action as required to remedy this existing issue – since not doing so could have long term grave consequences. If we are to bear fruit as a faith we
have to make certain to guard our garden from disease.”

Jaharis also spoke about the scandal at St. Irene Chrysovalantou Patriarchal Monastery which has shaken our GreekAmerican Community. He said that “in the meantime, a monastery situated in New York City and reporting directly to the Patriarchate and the not to the Archdiocese [because it belongs to the category of Stavropegial]was accused of inappropriate, unethical, and disgusting activities. Steps have been taken by the Patriarchate to remove those responsible for such unacceptable and reprehensible misconduct. However, the matter still remains in a [volatile]status of potential danger. We are very fortunate that these incidents have received only local publicity: but while the Church has no authority nor ability to rectify the deplorable and condemnable matters mentioned in this particular case, it could probably be unfairly cast with the shame of the circumstances alleged at this Monastery – and not to mention, the traumatic scars inflicted on the alleged victims and their families who are members of our community.”

Jaharis made extensive reference to the progress that has been made the last 13 years as well as the contribution of Archbishop Demetrios to bring peace and reconciliation to the Church. He concluded saying “as we celebrate our good work and good deeds, we must also make sure that the legacy we leave for our children is plentiful and sustainable.”