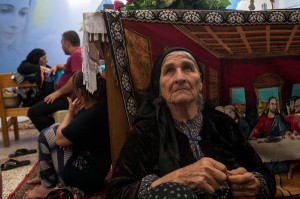 Farida Pols Matte, 80, in Ankawa, Iraq, with her family and other Iraqi Christian refugees. They are among the hundreds of thousands of people displaced by the Islamic State in Iraq and Syria. Credit Lynsey Addario for The New York Times

WHEN the long, grim history of Christianity’s disappearance from the Middle East is written, Ted Cruz’s performance last week at a conference organized to highlight the persecution of his co-religionists will merit at most a footnote. But sometimes a footnote can help illuminate a tragedy’s unhappy whole.

For decades, the Middle East’s increasingly beleaguered Christian communities have suffered from a fatal invisibility in the Western world. And their plight has been particularly invisible in the United States, which as a majority-Christian superpower might have been expected to provide particular support.

There are three reasons for this invisibility. The political left in the West associates Christian faith with dead white male imperialism and does not come naturally to the recognition that Christianity is now the globe’s most persecuted religion. And in the Middle East the Israel-Palestine question, with its colonial overtones, has been the left’s great obsession, whereas the less ideologically convenient plight of Christians under Islamic rule is often left untouched.

To America’s strategic class, meanwhile, the Middle East’s Christians simply don’t have the kind of influence required to matter. A minority like the Kurds, geographically concentrated and well-armed, can be a player in the great game, a potential United States ally. But except in Lebanon, the region’s Christians are too scattered and impotent to offer much quid for the superpower’s quo. So whether we’re pursuing stability by backing the anti-Christian Saudis or pursuing transformation by toppling Saddam Hussein (and unleashing the furies on Iraq’s religious minorities), our policy makers have rarely given Christian interests any kind of due.

Then, finally, there is the American right, where one would expect those interests to find a greater hearing. But the ancient churches of the Middle East (Eastern Orthodox, Chaldean, Maronites, Copt, Assyrian) are theologically and culturally alien to many American Catholics and evangelicals. And the great cause of many conservative Christians in the United States is the state of Israel, toward which many Arab Christians harbor feelings that range from the complicated to the hostile.

Which brings us to Ted Cruz, the conservative senator and preacher’s son, who was invited to give the keynote address last week at a Washington, D.C., summit conference organized in response to religious cleansing by the Islamic State in Iraq and Syria.

The conference was an ecumenical affair, featuring an unusual gathering of patriarchs and clerics (few of whom agree on much) from a wide range of Christian churches. But Middle Eastern reality and the Christian position in the region being what they are, this meant that it included (and was attacked for including) some attendees who were hostile to Israeli policy or had said harsh things about the Jewish state, and some who had dealings with Israel’s enemies — Assad and Hezbollah, in particular.

Perhaps (I think almost certainly) with this reality in mind, Cruz began his remarks with a lecture on how Assad, Hezbollah and ISIS are indistinguishable, and paused to extol Israel’s founding, and then offered the sweeping claim that the region’s Christians actually “have no greater ally than the Jewish state.”

The first (debatable) proposition earned applause, as did his calls for Jewish-Christian unity. But at the last claim, with which many Lebanese and Palestinian Christians strongly disagree, the audience offered up some boos, at which point Cruz began attacking “those who hate Israel,” the boos escalated, things fell apart and he walked offstage.

Many conservatives think Cruz acquitted himself admirably, and he’s earnedadmiring headlines around the right-wing web. There is a certain airless logic to this pro-Cruz take — that because Assad and Hezbollah are murderers and enemies of Israel, anyone who deals with them deserves to be confronted, and if that confrontation meets with boos, you’ve probably exposed anti-Semites who deserve to be attacked still more.

But this logic shows not a scintilla of sympathy for what it’s actually like to be an embattled religious minority, against whom genocide isn’t just being threatened but actually carried out.

Some of the leaders of the Middle East’s Christians have made choices that merit criticism; some of them harbor attitudes toward their Jewish neighbors that merit condemnation. But Israel is a rich, well-defended, nuclear-armed nation-state; its supporters, and especially its American Christian supporters, can afford to allow a population that’s none of the above to organize to save itself from outright extinction without also demanding applause for Israeli policy as the price of sympathy and support.

If Cruz felt that he couldn’t in good conscience address an audience of persecuted Arab Christians without including a florid, “no greater ally” preamble about Israel, he could have withdrawn from the event. The fact that he preferred to do it this way instead says a lot — none of it good — about his priorities and instincts.

The fact that he was widely lauded says a lot about why, if 2,000 years of Christian history in the Middle East ends in blood and ash and exile, the American right no less than the left and center will deserve a share of responsibility for that fate.