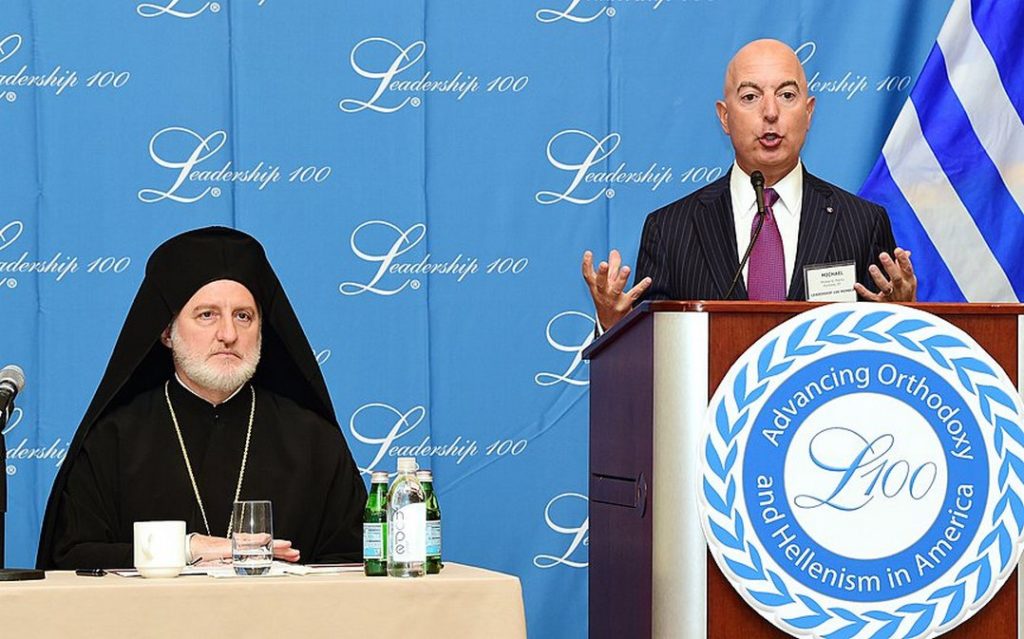 BOSTON – Construction of the St. Nicholas Greek Orthodox Church and National Shrine Nicholas that was standing unfinished, projecting only an uncertain shame for twenty years onto our Greek Orthodox Archdiocese of America, our Greek-American Community, and Hellenism in general, is progressing and will soon be the pride of Orthodoxy and Hellenism in the United States and the World.

It is the achievement of the leadership of the new Archbishop Elpidophoros of America and his close co-workers Protopresbyter Alexander Karloutsos, John Catsimatidis, and the organization Friends of St. Nicholas led by Michael Psaros and Dennis Mehiel, among others.

Michael Psaros, the prominent global businessman, a man of deep faith and love, respect and enthusiasm for the great and essential issues of the Genos was kind enough to grant in this celebratory edition of The National Herald honoring the Incarnation of The One of the Trinity, the Son and Logos of God, an exclusive interview providing updates and valuable information

Psaros said “we are thrilled to announce the launch of our new website. We encourage everyone to visit our new website at www.stnicholaswtc.org and ask that your readers please share the link with everyone interested in the success of the St. Nicholas National Shrine. On the website, you will be able to read our Monthly Newsletter that is sent to all stakeholders of the National Shrine. We just released the November 2020 issue. The Monthly Newsletter includes an Archpastoral exhortation from His Eminence, Archbishop Elpidophoros, followed by an update from Dennis Mehiel, myself, and Richard Browne on matters involving construction and fundraising. The Monthly Newsletter demonstrates our commitment to transparency, accountability, and disclosure regarding all matters. We encourage everyone to sign up to receive the Monthly Newsletter.”

Regarding the progress of the construction he said:

“We began construction of the National Shrine in January 2020 through subcontractors in the Midwest and in Europe. His Eminence, Archbishop Elpidophoros and Governor Cuomo officiated at a powerful and emotional ceremony to celebrate the resumption of construction at Ground Zero on August 3, 2020. Everyone who was present for the ceremony understood the magnitude of the occasion. We were all witnesses to history. The resumption of construction at St. Nicholas is a powerful symbol to the world of the conviction of the Greek-American Omogenia to proclaim our Faith in the heart of the most powerful city in the world. The global media coverage of the events on August 3rd was extraordinary – true global media coverage.  This is why St. Nicholas matters.  The world is watching.

“The exterior of the Church and substantially all of its interior will be completed by September 11, 2021, in time for the 20th anniversary of the September 11th tragedy and the 100th anniversary of the creation of the Holy Archdiocese of America. We are planning to have an extraordinary weekend of events on that day centered on the consecration of the National Shrine. The interior of the Church will be finally completed in the spring of 2022.

“We thank Richard Browne, who serves as the volunteer COO of Construction for Friends of St. Nicholas and is responsible for supervising the construction. We are blessed that the construction of the Church is now being supervised by an experienced and accomplished professional. He is being assisted by Louis Katsos, whose advice and guidance are invaluable.”

Asked about the status of the Fundraising, Psaros said “the estimated cost to complete the National Shrine is $45 million, including a $3 million contingency reserve. Friends have already expended almost $11 million on construction to date, leaving $31 million to $34 million of expenditures.

“Friends of St. Nicholas has raised approximately $45 million. Today, we have approximately $15.6 million of cash on hand, $19 million of pledges. The timely conversion of the pledges into cash is critical to our continued progress.”

Speaking about the iconography Psaros said, “we believe that hundreds of thousands of people a year will visit the National Shrine just to venerate its extraordinary iconography. His Eminence, Archbishop Elpidophoros appointed His Grace, Bishop Joachim, to partner with Father Lukas of Mt. Athos to design the iconography program for the Church. Iconography will stand witness to the Resurrection of Ground Zero by incorporating certain unique aspects of New York City and the tragic events that occurred on September 11th, all while celebrating St. Nicholas. Given that the National Shrine will be the most visited Orthodox Church in the world visited by non-Orthodox, it will be the first time that millions of people from all over the world, of all faiths, are exposed to Orthodox iconography.”

Psaros has a vision for the site:

Appealing to the Greek-American Community Psaros invites everyone to participate. He said, “we exhort the Faithful and Omogenia to donate. This is a once-in-a-lifetime opportunity to participate in the creation of our National Shrine. An opportunity like this will not present itself again. Friends of St. Nicholas is raising a $20 million endowment for the National Shrine. Income from the endowment will help pay for the costs associated with building maintenance and security. The National Shrine will recognize every single donor. The ‘logia’ from the Faithful will be recorded and recognized for eternity.  A hundred years from now, visitors to the National Shrine will know who contributed to its creation. Please donate online – www.stnicholaswtc.org – or, please mail donations to: Friends of St. Nicholas; c/o Mr. Andrew Veniopoulos; 8 East 79th Street; New York, NY 10075.”