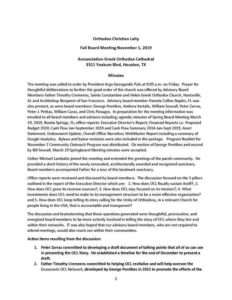 Father Michael Lambakis joined the meeting and extended the greetings of the parish community.  He provided a short history of the newly renovated, architecturally awarded and recognized sanctuary.  Board members accompanied Father for a tour of this landmark sanctuary.

Office reports were reviewed and discussed by board members.  The discussion focused on the 5 pillars outlined in the report of the Executive Director which are:   1. How does OCL fiscally sustain itself?; 2. How does OCL grow its revenue sources?; 3. How does OCL stay focused on its mission?; 4. What investments does OCL need to make to its management structure to be a more effective organization? and 5. How does OCL keep telling its story calling for the Unity of Orthodoxy, in a relevant Church for people living in the USA, that is accountable and transparent?

The discussion and brainstorming that these questions generated were thoughtful, provocative, and energized board members to be more actively involved in telling the story of OCL where they live and within their networks.  IT was also hoped that our advisory board members, who are not required to attend meetings, would also reach out within their communities.

Action items resulting from the discussion:

Revisions of the by-laws were reviewed and discussed.  George Pontikes presented the revisions which included:

Article VI is rescinded   and now reads:      BOARD OF DIRECTORS

Article VI, Board of Directors, of the By-Laws is rescinded and replaced by the following”

Section 6. Board Member Yearly Donation Regular Board Members are required to donate on an annual basis a tax-deductible gift to the organization to assist in fulfilling its mission. Under special circumstances, the amount of the minimum donation may be adjusted following discussion by an individual board member and the president. The amount to be determined by the Board of Directors and a sliding scale of the amount can be determined by individual member and president. Board donation obligation is set at a minimum of $1,000.

Section 8. Quorum. One-third of all the Members of the Board of Directors shall constitute a quorum. Action may be taken by the affirmative vote of a majority of the Members constituting a quorum who are present and voting.

Section 9. Minutes. The Board of Directors will keep minutes of all of its meetings. Copies of the minutes will be sent to each Director at least five days prior to the next meeting of the Board.

Section 10. Compensation. Directors will not receive any compensation for their services, but may be reimbursed, by approval of the Board of Directors, for actual expenses incurred in carrying out their duties as Directors or the business of the organization.

Section 11. Removal. The Board of Directors may remove any Director for cause, by an affirmative vote of two-thirds of the Directors present and voting at any meeting of the Board where a quorum is present, provided that notice of said proposed action is included in the Notice of the Meeting. Unexcused absence from two or more consecutive meetings of the Board by a Board Member is an example of cause for which removal may be considered. Failure to fulfill yearly board donation is also a cause for which removal may be considered.

Section 12. Notice. Notice of Meetings of the Board shall be given in writing or by telephone at least seven (7) days prior to the date of said Meeting.

On motion by George Pontikes and second by Bill Souvall, changes to articles 4, 5 and 6 were unanimously approved.  Article 3 was approved in concept but agreement on wording was not reached.  George Karcazes and George Pontikes will work on the wording and a conference call will be scheduled with all board members for approval before the end of 2019.  It should be noted that Alice Kopan and Peter Marudas approved all changes, even Article 3, by telephone conversations with George Karcazes and George Matsoukas.  They could not attend the meeting but called to register their votes on the bylaws.  By law changes were sent to all voting board members 2 weeks before the meeting.   Comments and changes were solicited at that time. They reported within the two-week period.

The meeting was adjourned at 4:30 p.m. and officers for the fiscal year 2020 were elected.  Argo Georgandis Pyle agreed to serve as president for another year.  Vice Presidents are Andrew Kartalis, William Souvall and Peter J. Petkas.  George Pontikes is Treasurer and George Karcazes is Secretary and immediate Past President.

Board member Peter Petkas invited board members and speakers to their home for dinner and fellowship following the meeting.  Belle and Peter are gracious hosts and we thank them for their hospitality.

The Orthodox Christian Laity does not have members. Orthodox Christian Laity shall consist only of the elected Members of the Board of Directors.  The Board of Directors may establish Advisory Boards with such memberships and duties as it may determine from time to time.  In conjunction with its Annual Meeting, the Board shall publish a list of its Supporters/Donors in such categories as it shall establish, including donors who wish to be listed as “Anonymous”.

George Pontikes proposed the motion to adopt this language.  William Caras seconded this motion.  An interesting discussion followed with all board members participating.   Andy Kartalis made the case for maintaining membership.  The question was called at 9:55 pm and the motion was accepted and passed by a vote of 8 for the proposed motion as written and 1 board member against.

The Orthodox Christian Laity Bylaws were officially amended with this vote on Article 111 on December 8, 2019.  The original by-laws were adopted in 1990 and amendment in 2011.

CLICK HERE to view the PDF version of the Minutes.