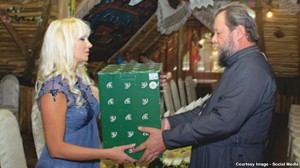 One of the photos from Nelli Tcaciuc’s Odnoklassniki account showing her with Metropolitan Vladimir.

A Moldovan newspaper says it was threatened after publishing two scandalous investigative reports on the assets and personal life of the head of Moldova’s Orthodox Church.

The Chisinau weekly “Ziarul de Garda” says it received the telephone threats on September 11 after publishing photos of Vladimir, metropolitan of Chisinau and All Moldova, vacationing in Turkey with a woman named Nelli Tcaciuc.

According to an investigation by the newspaper, Vladimir does not live in his official residence or in the apartment that he owns in Chisinau, but rather in a luxurious villa in the Bostanci neighborhood about 5 kilometers from the capital.

The paper also reported that official records show the villa is owned by the 47-year-old Tcaciuc. Neighbors and locals interviewed by “Ziarul de Garda” confirmed that the church official and a blond-haired woman are frequently seen coming and going from the estate, which is surrounded by high walls, according to the report.

Investigating further, the paper found what they believe was Tcaciuc’s page on the Russian social-media site Odnoklassniki, where numerous photos of a woman together with Vladimir were published. One image shows him dressed in Orthodox regalia handing her a birthday present.

Other photographs, however, show Vladimir vacationing with the woman on the beaches of Turkey’s Kemer region in 2012. One shows the pair in bathing suits, while another shows them casually dressed on a cruise in a small boat.

“We found that he is living in a house and the house belongs to a woman,” says Alina Radu, general director of “Ziarul de Garda,” describing the investigation. “The woman has her business. Then we were just searching around on Odnoklassniki…and on her profile we found a lot of pictures of this woman, a blond woman, with the bishop standing by the sea, on boats, eating, drinking, things like that.”

The Odnoklassniki profile in question has since been removed.

The paper reported that Tcaciuc also owns two apartments in the capital and a security firm called Alfa-Nord, which is registered at one of the apartments and advertises that it provides personal security and private-detective services.

Despite repeated phone calls, “Ziarul de Garda” said it was unable to get any reaction to the story from Tcaciuc, Metropolitan Vladimir, or the Moldovan Orthodox Church.

Just hours after the story hit the newsstands on September 11, however, the paper says received a phone call from a man who identified himself as Ruslan Ibraghimov and who called from a telephone number listed as belonging to Alfa-Nord.

The paper recorded the 14-minute conversation with Ibraghimov, in which he claimed Tcaciuc is his wife and said he would deal with the newspaper “according to Chechen law,” Radu says. He did not make any direct physical threats, but repeated the comment about “Chechen law” several times, adding that he “will not let this go,” she added.

The newspaper has provided the information to the police, who are investigating.

The metropolitan of Chisinau and All Moldova is appointed by the Patriarch of Moscow and All Russia. Vladimir was appointed by then Patriarch Aleksy II in December 1992. As an Orthodox monk, Vladimir is not permitted to marry and has taken a vow of celibacy.

On September 4, the paper also published an investigation revealing public records that showed Vladimir, under his lay name Nicolae Cantarean, is registered as founder and manager of at least two private companies.

The church did not respond to repeated requests for comment on those reports, according to “Ziarul de Garda.”