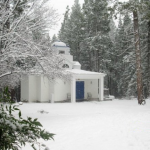 MANTON, CA [OCA] The “Ponderosa Fire”—one of more than a dozen spawned as a result of lightning on Saturday, August 18, 2012 throughout this region some 170 miles north of Sacramento—continues to threaten Saint John of Shanghai and San Francisco Monastery here.

As of Monday morning, it had been reported that the blaze had already grown to 12,000 acres.

Mixed reports have been received with regard to the monastery property, although many who wrote in to [email protected] reported that, to their knowledge, the main monastery building has not been touched.  Other news sources indicated that fire crews were at the monastery.

It also has been confirmed that the monks had been evacuated and are safe.

“We were evacuated at 4:00 p.m. Saturday, having a 30 minute warning,” said Hiermonk Alexis in an e-mail sent to the OCA web team early Monday morning.  “We stayed at the Manton Elementary school Red Cross shelter until 7:00 p.m., until leaving for friends and family.  We took the relics, a few icons, personal belongings, one computer, and a laptop.  Most of us have gone to friends and family.  Father Andrew took the two dogs to a vet in Redding who volunteered to board them for free for three days.  He will be staying at the Red Cross shelter and will be the monastery’s local connection for news.

“There are reports that the monastery buildings are still unharmed, but this has not been verified, since the fire is still zero percent contained,” Father Alexis continued.  “We will not be able to return for at least a few days [and]we are very grateful for the love, concern and prayers from everyone, and will give updates as we know them.”

Ongoing prayers are requested of the faithful.  Additional information will be posted on the OCA web site as received.