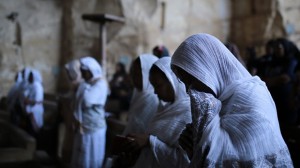 Once again, ISIS has orchestrated and filmed the dramatic mass killing of African Christians who refuse to deny their faith.

This time, the approximately 28 men targeted by the Libya affiliate of the self-proclaimed Islamic State (also known as Daesh) were Ethiopian Christians. In February, the killing of 21 mostly Egyptian Christians drew widespread horror and fears of future massacres, but also led to Egypt’s largest Bible outreach.

The exact numbers of victims in the latest incident cannot be confirmed. The video of the executions, entitled “Until there came to them clear evidence”, switches between a scene on a beach in eastern Libya, where an estimated 15 men in orange boiler suits are beheaded by masked militants in camouflage, and a scene in a desert area in southern Libya where similarly dressed Daesh members execute a similar number of men in black boiler suits by shooting them in the head. A subtitle refers to both groups of victims as “worshippers of the cross belonging to the hostile Ethiopian church.”

The video also includes scenes depicting the destruction of churches in Syria and Iraq and condemns the doctrine of the Trinity as a form of apostasy. Prior to the executions, an English-speaking masked narrator dressed in black warns that “the nation of the cross” must either embrace Islam, pay the jizya tax or face death.

The New York Times reports more details on the video, as does CNN. Regarding how Mosul Christians were told to convert to Islam or pay a protection tax, the speaker in the video says, “The Christians never cooperated.”

The video was released the same day the Archbishop of Canterbury, Justin Welby, arrived in Cairo to offer condolences for the previous martyrs in Libya: 20 Coptic Orthodox Christians and a sub-Saharan African. (CT reported how their deaths were unifying Egypt andinspiring Muslimsthroughout the Arab world, as well as honored in the Coptic calendar.)

“Why has Libya spoken so powerfully to the world?” asked Welby during a public sermon. “The way these brothers lived and died testified that their faith was trustworthy.”

Ethiopia is Africa’s second most-populated country, and approximately two-thirds of its 90 million people are Christians, notes AsiaNews. “Many have moved to Libya, where they found work, or are waiting to board a migrant ship to reach Europe.”

Abba Kaletsidk Mulugeta, an Orthodox Church official, believes the victims were likely migrants, seeking work or a passage to Europe, according to the Daily Mail.

And while it is too early to determine the denominational affiliation of the Ethiopians, 44 percent of their nation’s population belongs to the Orthodox Tawahedo Church,according to the CIA World Factbook. Protestants represent 19 percent.

The Ethiopian government has not yet been able to confirm the video, or certify the victims are its citizens.

But Grant LeMarquand, the Anglican bishop of the Horn of Africa, says they certainly appear to be.

“If they were given the chance to convert and did not,” he told CT, “they should be considered what ISIS calls them: ‘People of the Cross’, and therefore true followers of the crucified one.”

Bishop Angaelos, the general bishop of the Coptic Orthodox Church in the United Kingdom, underscored the Ethiopians’ testimony.

“Once again we see innocent Christians murdered purely for refusing to renounce their faith,” he said in a statement.

“As Christians, we remain committed to our initial instinct following the murder of our 21 Coptic brothers in Libya, that it is not only for our own good, but indeed our duty to ourselves, the world, and even those who see themselves as our enemies, to forgive and pray for the perpetrators of this and similar crimes,” he said. “We pray for these men and women, self-confessed religious people, that they may be reminded of the sacred and precious nature of every life created by God.”

The Ethiopian Orthodox Tawahedo Church is the largest Oriental Orthodox denomination in the world. It claims descent from the Ethiopian eunuch converted by Philip in Acts 8, and dates formally to the preaching of Frumentius in the early fourth century and the acceptance of Christianity in 330 A.D.

The word tawahedo is a Ge’ez term meaning “unified,” referring to Christ’s one nature, both human and divine. In 451 A.D., the Oriental Orthodox churches rejected the Council of Chalcedon’s pronouncement of his two natures.

The Ethiopian Orthodox Church remained administratively part of the Coptic Orthodox Church until 1959, when Egypt granted the church the right to appoint its own patriarch.

LeMarquand remarked that Muslims and Christians in Ethiopia have for the most part lived together in peace. The radicalization of neighboring Somalia, however, has strained local coexistence. He requested prayer for upcoming elections on May 24.

Over the last several years, the Ethiopian government has been active in military response to the atrocities of the Somali Islamist terrorist group al-Shabab. The ISIS video may have indirectly referenced this as motivation for the group’s killing of the Ethiopian Christians.

“’Muslim blood shed under the hands of your religions is not cheap,” it said. “To the nation of the cross we are now back again.”

To this threat, Welby urged solidarity. “We must grieve for them, support their families, and seek to change the circumstances that lead to their death,” he said during his Cairo sermon. “All Christians are witnesses. The God who raised Jesus from the dead will raise them also, whose testimony brought many to the truth of Christ.”

More than 40 percent of immigrants to the European Union are Christians—the largest population of any religious group, according to the Pew Research Center. CT previously noted that many of the 250 migrants who drowned crossing the Mediterranean in 2013 were African Christians fleeing persecution.

Thousands of Ethiopians have immigrated to Middle East, North Africa, and Europe in search of work, though many have faced later deportations or abuse. Last December, 70 Ethiopians drowned after their boat capsized off the coast of Yemen. (None of the Christians thrown overboard last week by fellow Muslims migrants were Ethiopian.)

Many emigrating Ethiopians are Oromo, a people group of 24 million who have been “ruthlessly targeted” and tortured by the government, as they have fought for increased self-determination. Nearly one third are Orthodox Christian, one in five Protestant, and half Muslim. 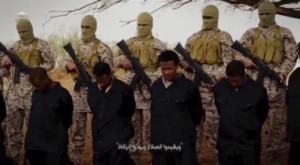 Reuters
The video purportedly made by ISIS and posted on social media sites on Sunday appeared to show militants shooting and beheading about 30 Ethiopian Christians in Libya.

CT reported how Egypt’s Bible society turned the previous 21 martyrs in Libya into a Bible tract that is rivaling the Bible for circulation, as well as how Christian forgiveness has gone viral in the Arab world. CT has also noted how US Christian leaders are increasingly advocating for persecuted Christians in the Middle East and North Africa, and Frank Wolf’s plan for their safety.