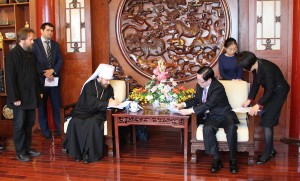 Metropolitan Hilarion with Wang Zuoan, director of the State Administration for Religious Affairs

Metropolitan Hilarion, the Moscow Patriarchate’s ‘foreign minister’, made the announcement after a visit to China where he met the leaders of the State Administration for Religious Affairs. The first priest should serve in Harbin. Two more ordinations are expected. With a new Cold War as the background, the Moscow-Beijing strategic alliance also has a Church connection with the People’s Republic recognizing the latter’s ‘political’ role in Russia.

Moscow (AsiaNews) – In order to compensate for its isolation from the West over the Ukrainian crisis, Moscow has revived its strategic alliance with Beijing, a step that includes the Church. Indeed, for the first time in 60 years, the People’s Republic of China has authorized the ordination of Chinese Orthodox priests.

Metropolitan Hilarion of Volokolamsk, head of the Synodal Department for External Church Relations of the Moscow Patriarchate, made the announcement after an official visit to China (14-17 May), the TASS news agency reported. In Beijing, the Russian Orthodox Church official took part in the fourth session of the Sino-Russian working group for contacts and cooperation in religious matters.

Hilarion’s visit came a few days after President Xi Jinping travelled to Moscow (8 to 9 May) for the 70th anniversary of the Soviet victory over the Nazis, which was deserted en masse by Western leaders.

After the meetings with Vladimir Putin, Xi held talks with Russian Orthodox Patriarch Kirill, who praised Beijing for the value China places on the “role of culture, traditions and the moral factor in shaping the lives of people and individuals.”

“We had very constructive talks with the State Administration for Religious Affairs,” Bishop Hilarion said. “We agreed on the ordination to the priesthood of an ethnic Chinese who studied for several years in Russia. We hope that he will serve in Harbin at the Church of the Intercession,” which is currently undergoing restauration. “Until now it had no priest. Now, God willing, it will have a priest”.

On 14 May in Beijing, Hilarion met Wang Zuoan director of the State Administration for Religious Affairs (pictured). “We agreed that two other seminarians will study in Russia, with a view to their possible ordination,” he explained. In fact, “I hope that Orthodoxy will grow in China with the help of God,” added the Patriarchate’s ‘foreign minister’.

In Beijing, Hilarion also took part in a panel discussion with representatives of ‘traditional religions’ of Russia and China and visited the oldest mosque in the city. He then travelled to Labdarin, in Inner Mongolia, which has one of the largest Orthodox communities in China, where he celebrated the Divine Liturgy in the Church of St Innokenty of Irkutsk, consecrated in 2009 by Michael Wang, the oldest priest of the Chinese Autonomous Orthodox Church.

In Labdarin, the representative of the Moscow Patriarchate also met with local political authorities and those in charge of religious affairs.

The Russian Orthodox Church arrived in China in the 17th century. The first communities were made up of Russian immigrants, mainly in the north of the country. Even today, most of China’s 13,000 Orthodox Christians are of Russian origin, concentrated mostly in Harbin’s Parish of the Intercession (Heilongjiang); in Labdarin (Inner Mongolia) as well as Kulj and Urumqi (Xinjiang).

The Chinese Orthodox Church acquired its autonomy in 1950, Kirill’s secretary Deacon Alexander Volkov said; however, the Cultural Revolution left the country without bishops and priests. Even today, the faithful have no priest, gathering occasionally on Sundays to pray.

There are, however, 13 Chinese students at Orthodox Sretenskaya Theological Academy in Moscow and the Academy of St Petersburg. Russian priests celebrate the liturgical services at Christmas and Easter in Russia’s embassy and consulates in China.

At the end of 2014, Kung Ming Cheung became the first ordained Chinese priest in Russia. He was sent to Saints Peter and Paul Parish in Hong Kong.

Cooperation between the Patriarchate and Beijing

The Patriarchate and the People’s Republic have been cooperating for some years with Moscow involved in pushing Russian Orthodoxy on Chinese territory against its the traditional rival represented by the Ecumenical Patriarchate of Constantinople, which, from Hong Kong has tried to have relations with Orthodox Christians in the mainland and other communities in the Far East.

“Religious cooperation” was officially sealed in 2013 when President Xi welcomed Kirill for the first time at the Great Hall of the People in Beijing.

In fact, China has come to recognize the Patriarchate’s ‘political’ role in Russia. China’s State Administration for Religious Affairs had directly invited the Russian Orthodox primate, with Moscow de facto recognizing the latter as the main Chinese interlocutor in religious matters.

This should come as no surprise since the Russian Church has a long history of making compromises with authoritarian regime. Unlike the Holy See, it has shown no qualms about dealing with political authorities even when the life of its own community of faithful is at stake.