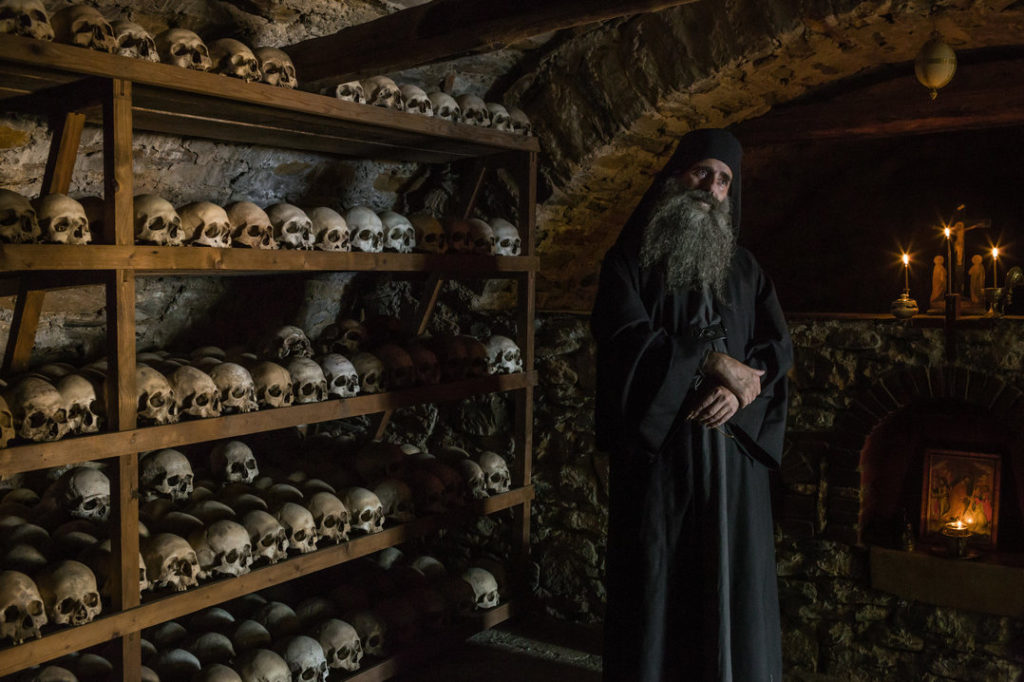 MOUNT ATHOS, Greece — The skulls, lined up five deep on wooden shelves, date back hundreds of years, with the names of the more recently deceased scratched onto their foreheads — Monk Theolothelis, 91, 26-6-1986, or Monk Kyprianos, 100, 14-8-87.

They are exhibited in Xenophontos Monastery here on Mount Athos, a peninsula in northern Greece that is the spiritual heart of the Eastern Orthodox Church. One skull carries a more philosophical message: “Brother, Look at the glory of man.”

That invitation to reflect on mortality encapsulates why the dead are exhumed and their bones displayed, explained Father Jerome, 50, who has an untamed salt-and-pepper beard and wore washed-out gray robes.

“Today you are here, the next day you are not,” he said. “If you remember death every day, it keeps you from doing evil.”

While the skull display underscores human transience, the 20 monasteries and a host of smaller dwellings on Mount Athos seem eternal. Monks have been chanting psalms here daily for centuries.

“It is an ancient community, organized just like now for more than 1,000 years,” said Abbott Alexios, 79, who found Xenophontos collapsing when he arrived in 1976, and has since led its rebuilding. “The church has its traditions, but Mount Athos is transcendent.” 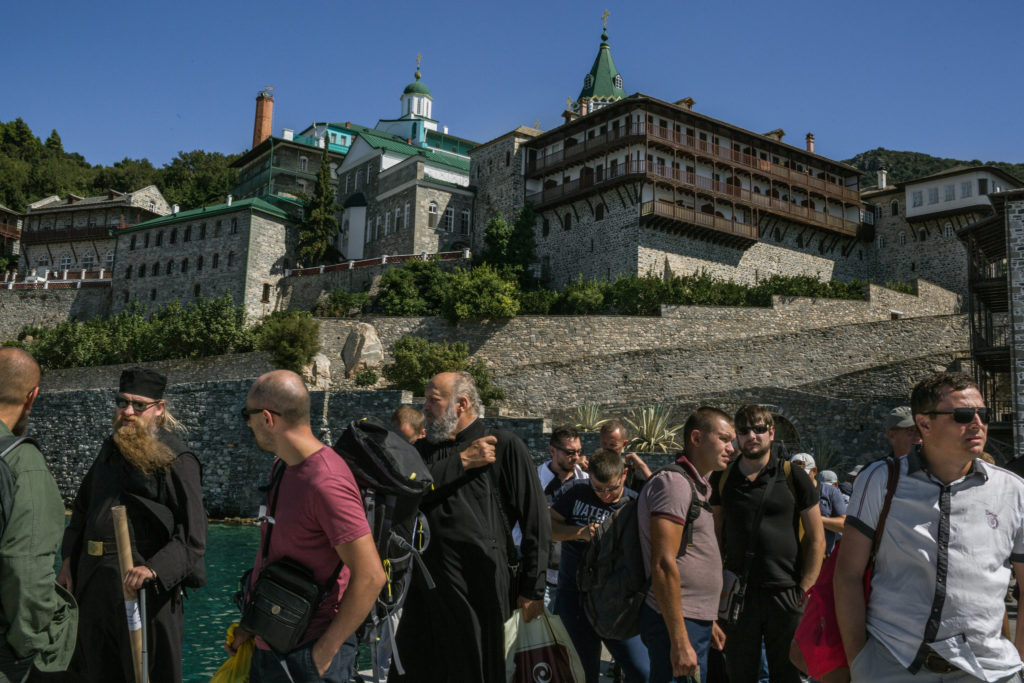 Pilgrims getting ready to board a ferry at the pier of the Russian monastery, St. Panteleimon.
Mauricio Lima for The New York Times

The peninsula could almost be another Greek tourist resort with its peridot shallows, pine-covered hills and the 6,670-foot Athos peak dominating one end of its nearly 130 square miles.

But the Autonomous Monastic State of the Holy Mountain is a place apart. 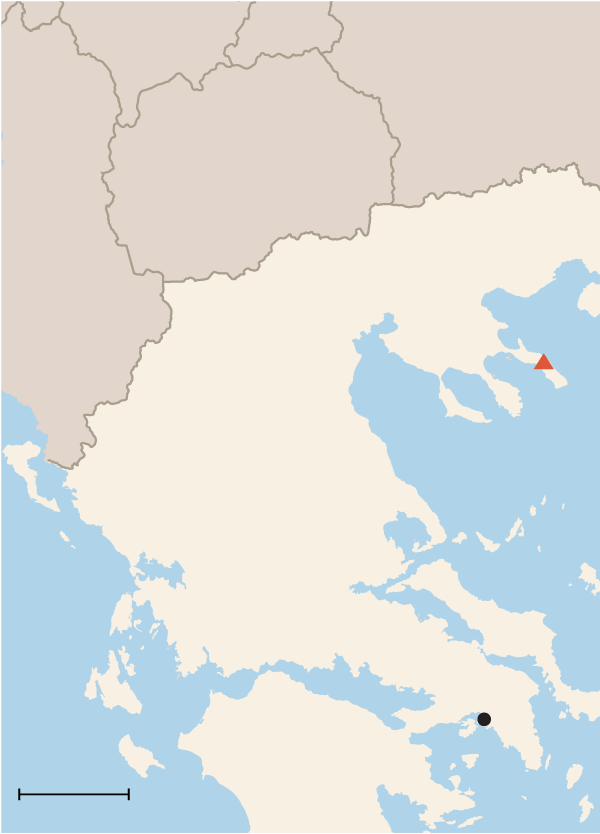 By The New York Times

For almost as long as there have been monks here, women have been barred — considered a distraction and undue competition for the Virgin Mary, the patron saint. There are no hotels, no bars, no stores, no television and no swimming, plus a daily quota limits visitors.

Travelers arrive on boats providing the only public access to the peninsula. Collectively, the monasteries play host to an average of 1,200 people nightly, all without charge.

The difficult access and the high monastery walls once built against marauding pirates seemed to keep time at bay, too, but now the modern world penetrates on cellphone signals and internet connections. 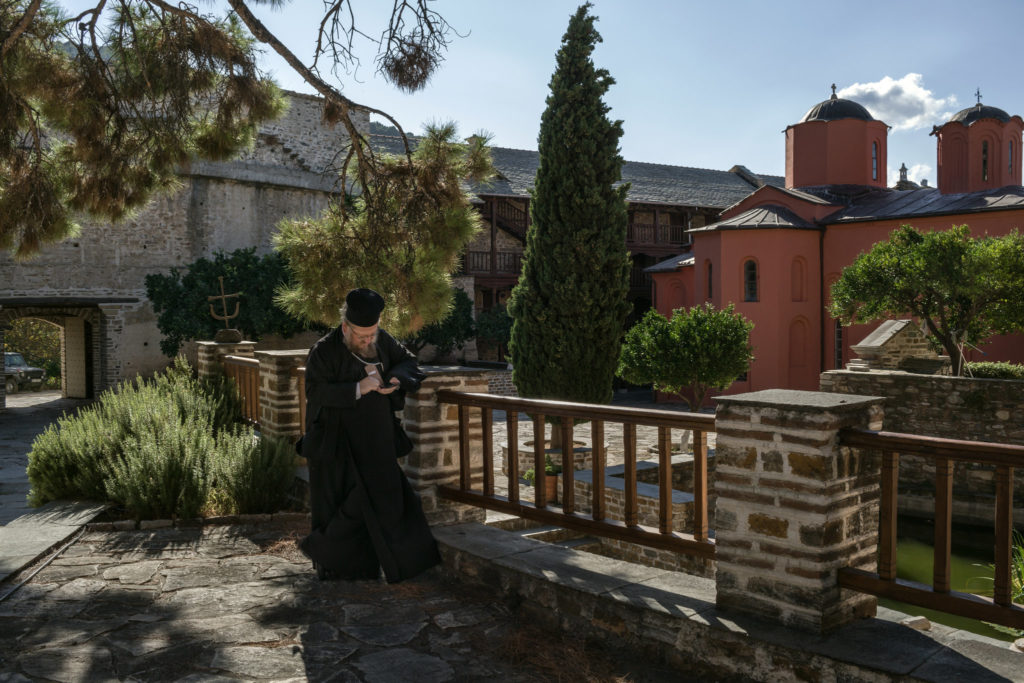 Greek officials fear any revival of the pre-revolutionary effort by czarist Russia to dominate the peninsula.

Athos holds a special place in the Greek psyche, as a throwback to when the might of the Byzantine Empire meant Greek culture dominated the eastern Mediterranean.

There have been monks here since the sixth century or so, and Mount Athos is a kind of storehouse of Byzantium civilization, with monasteries sticking to the Julian calendar, 13 days behind the more common Gregorian calendar.

“We preserve the Byzantine Empire because it is a treasure of Orthodoxy, not because this is the relic of a secular state,” said Father Jeremiah, 48, a Protestant convert from San Angelo, Tex., who came to Xenophontos on a pilgrimage 22 years ago and has lived there ever since. “This is not a museum, but a living place.”

Ancient texts dictate the rhythm of daily life for the approximately 2,000 monks on Athos, defining everything from the liturgy to the diet. 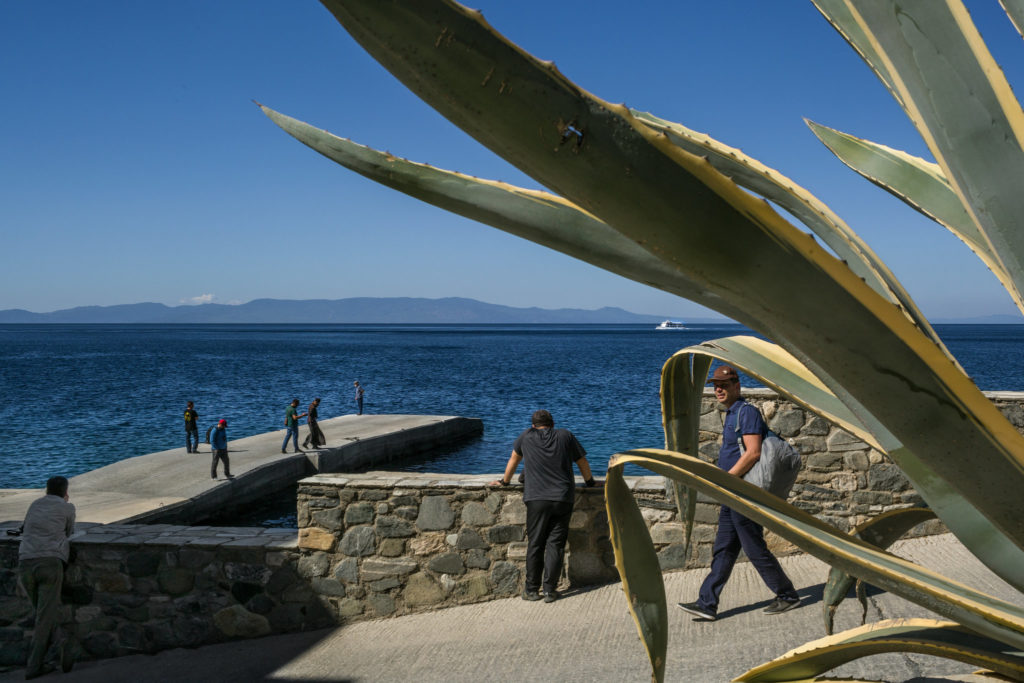 Pilgrims waiting for a ferry at the pier of St. Panteleimon Monastery.
Mauricio Lima for The New York Times

The monks, mostly Greek, spend about six hours in church daily. They rise six hours after sunset for morning prayers, summoned by a monk banging a semantron — a wood hammer on wood board — echoing the way Noah was said to have beckoned all living creatures into the ark.

Then shadowy figures pad across uneven flagstones with their cowls pulled over their heads.

“Evil spirits roam during the night, so somebody needs to stay awake to keep watch,” said Father Damaskinos, 33, who, unusually for Athos, returns to his native Finland regularly to work as a theology professor.

There are just two daily meals. One menu consisted of lentil purée, tomatoes, olives, fruit and water or red wine, at 9:30 a.m.

“We eat fast,” Father Jeremiah warned. A typical meal lasts 15 minutes. One monk reads prayers, and any visitor who tries to talk is shushed. 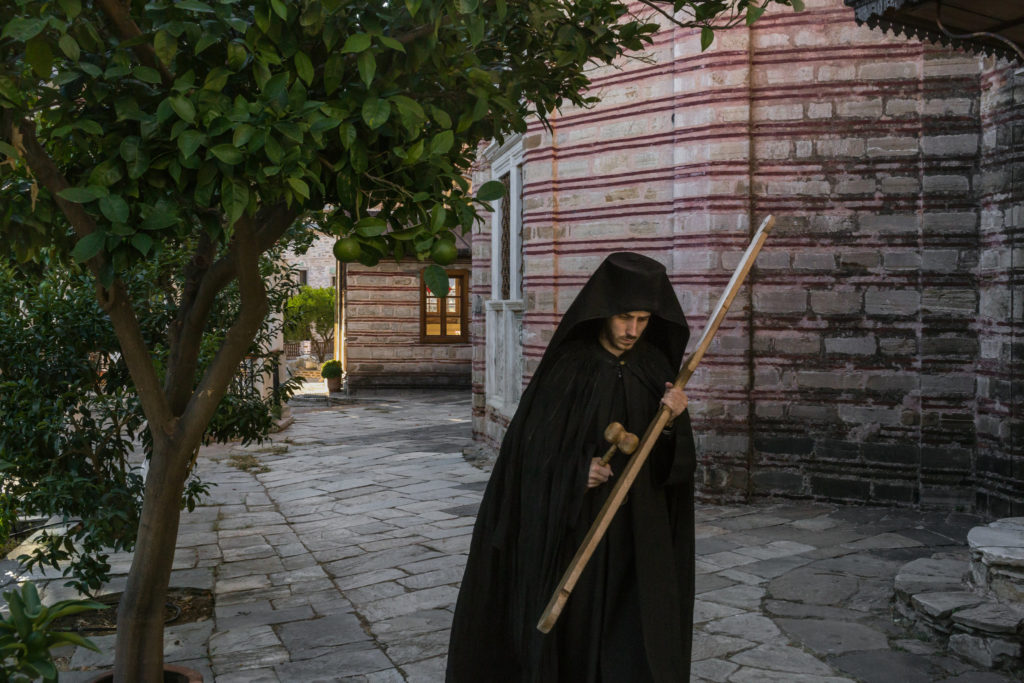 A monk banging a semantron — wood hammer on wood board — as a sign for prayer time in Xenophontos Monastery.
Mauricio Lima for The New York Times

After the morning meal, the monks work — gardening, cooking, painting icons — until it is time for vespers before sunset, the evening meal and bed. Even while working, most pray, their lips constantly moving with the refrain, “Lord Jesus Christ, have mercy on me.”

Monks often summarize their existence in pithy shorthand. “He is happy because he has nothing, but he has everything,” Abbot Alexios said of a monk’s life.

Yet Mammon and the material world seem to have intruded.

Monasteries sell their own line of products, including wine, olive oil, herbal teas and even body creams. The gift shop at Vatopedi Monastery sells icons for more than $17,000.

Expensive SUVs now whisk affluent visitors along dirt roads once limited to donkeys and trekking pilgrims. Xenophontos extols its woodworking shop, but laborers imported from Albania and Egypt do the hard work.

Some monks grumble about the tide of visitors overwhelming their devotions.

Some pilgrims dislike it, too. 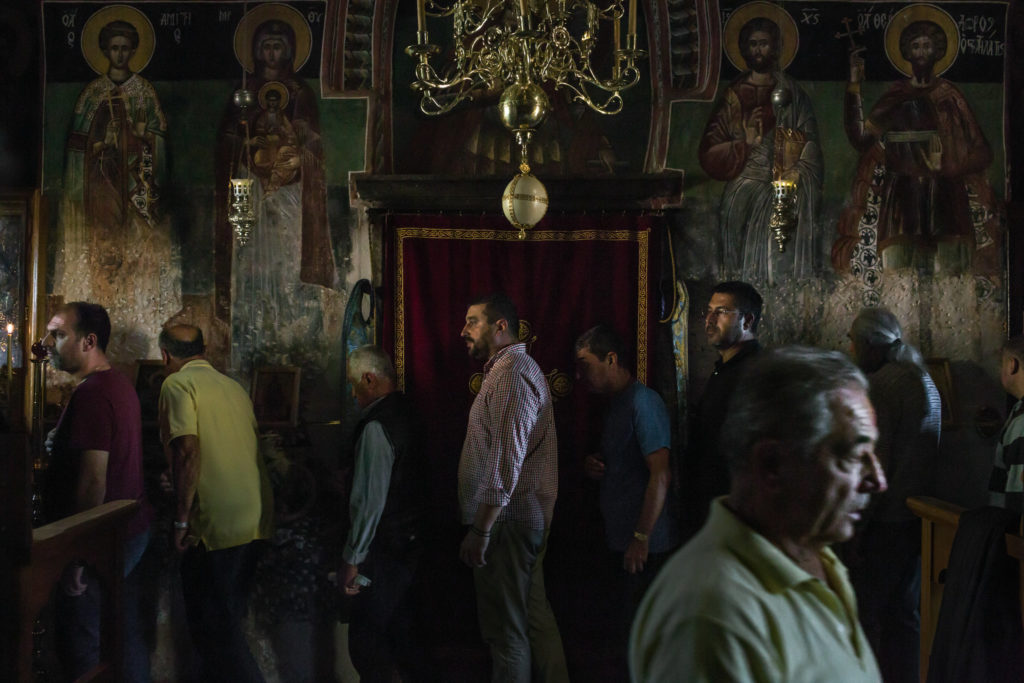 Foreign pilgrims inside a small church within Xenophontos Monastery.
Mauricio Lima for The New York Times

“I am an adherent of the old traditions, and I am against all these roads, these SUVs,” said Mikhail Miroshnikov, a middle-aged Russian pilgrim who comes twice yearly for spiritual discussions with the monks. “Some monasteries here are becoming more for business and not for the soul.”

Construction cranes hover over many monasteries; all but a few have been extensively rebuilt using European Union funds for historic preservation.

Senior government and church officials have said Russia planned to spend $30 million to restore the imposing Russian monastery, St. Panteleimon. Both public and private spending across Athos since 2005 might have reached $200 million, according to a BBC report seconded by several donors and experts.

When Mr. Putin last visited Athos in 2016, the Russian press reported excitedly that he was treated like a Byzantine emperor. Some Greek government and church officials found the comparison alarming. 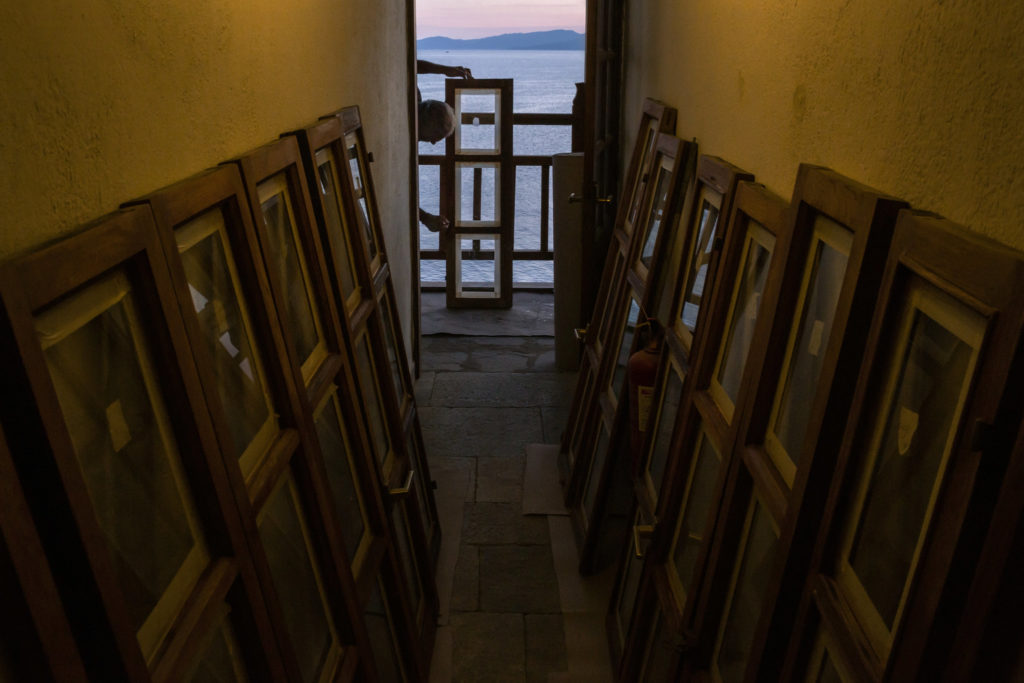 A worker from Egypt giving the final touches on new wooden windows at Xenophontos Monastery.
Mauricio Lima for The New York Times

Czarist Russia made a play to control Athos around 1913, flooding it with several thousand monks and insisting that it become independent. Athos ended up as an autonomous part of Greece.

Russian interest waned after the 1917 Revolution, but recent influence peddling has Athens worried about a renewed effort at domination.

Hard-line newspapers distributed free at Vatopedi, for example, shower praise on Russian Orthodoxy while pillorying Patriarch Bartholomew I of Constantinople, who controls Athos, as an enemy agent. The patriarch, considered the “first among equals” in church affairs, is engaged in a fight with Moscow over creating an independent church in Ukraine.

Last Monday, the Russian Orthodox Church banned its adherents from communion at churches under Bartholomew’s supervision, including all on Athos, but it is unclear how that will affect the tide of pilgrims or donations.

Monks and pilgrims tend to dismiss political questions, saying they came to Athos for spiritual sustenance and the intrinsic holiness of a place devoted to prayer.

“There is both historical holiness here in terms of relics and icons, and living holiness through monasticism,” Father Damaskinos at Xenophontos said. 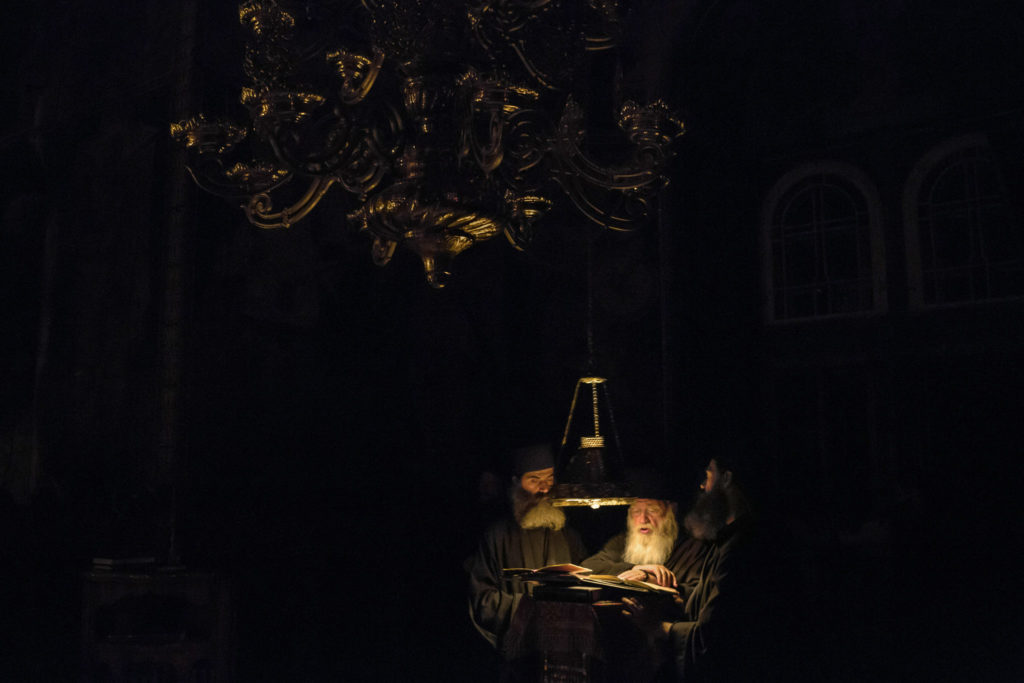 Abbot Alexios, 79, center, reciting a prayer during the early morning mass in the church of Xenophontos Monastery.
Mauricio Lima for The New York Times

A version of this article appears in print on Oct. 21, 2018, on Page A6 of the New York edition with the headline: Tourists and Russia Ruffle a Male-Only Holy Retreat. Order Reprints | Today’s Paper | Subscribe
Share. Twitter Facebook Pinterest LinkedIn Tumblr Email
Previous ArticlePATRIARCH BARTHOLOMEW TO VISIT KYIV TO HAND OVER TOMOS
Next Article “KIEV PATRIARCHATE” DECLARES KIEV CAVES AND POCHAEV LAVRAS TO BE UNDER PHILARET