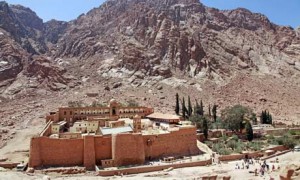 One of the world’s oldest monasteries has been forced to close its doors because of the deteriorating security situation in Egypt, devastating the economy of the remote surrounding area, it has emerged.

St Catherine’s monastery was built by order of the Emperor Justinian I, who reigned from 527 to 565, on the site beneath Mount Sinai where, according to scripture, God spoke to the prophet Moses from a burning bush. But in July, Egyptian officials asked it to close its doors. The closure followed the removal of former president Mohamed Morsi, which sparked upheaval across the country and revenge attacks on Christian churches.

The Greek Orthodox monastery is usually a popular tourist attraction, but the building’s closure has seen visitors abandon not just the site itself, but also the nearby town that takes its name from it, and which derives almost all of its income from tourism.

“My business is now zero. No one is coming,” said Sheikh Mousa al-Gebaly, the manager of a trekking and hotel company in the town and a member of the local Bedouin tribe – the Gebaliya – that handles around 90% of the local tourism trade. “The 5,000 of us who live in St Catherine don’t have anything any more,” said Mousa by telephone. “How will people eat?”

The area was already suffering due to a downturn in tourism sparked by Egypt’s 2011 uprising, but now the problem has become far worse. “Many are starting to sell their camels,” said Mohamed Khadr, an activist with the Community Foundation for South Sinai, a support group for locals. “They can’t afford to feed them.”

Camels cost around 20 Egyptian pounds (£2) a day to feed – a now unsustainable cost. Selling them gives their owners short-term relief, but deprives them of a long-term income.

“We have suffered a lot from this closure,” said Sheikh Taha al-Gebaly, one of the Gebaliya’s leaders. “There are 28 bazaars that are out of work now, and 28 cafes that cater to thirsty tourists have stopped working. There are about 80 vehicles that bus tourists back and forth, taking them to other locations such as Dahab and Sharm el-Sheikh. These vehicles are parked and their drivers idle.”

The situation is similarly grave at the monastery itself. It is now open for services, but not for tours or overnight guests – causing a drop in revenue that means the monks will soon be unable to pay the monastery’s 400-strong workforce, which is drawn from the local population, and which helps maintain the site’s farms and olive groves.

“It’s very bad,” said Ahmed Mohamed, an assistant manager at a hostel on the site. “The monastery doesn’t have the money to pay for the Bedouin who work inside the monastery.”

Father Paolos, a priest at St Catherine since 1972, told the website al-Monitor: “Despite having more time to pray and practise, our priests live without crowds of visitors. We are suffering a major financial crisis, and we cannot cover the monastery’s expenses and dozens of families that we constantly support.

“We respect the Egyptian government, and we will continue to close if they require the closure. But we will have to drastically cut down salaries and other expenditures. We are saddened to lose the income we shared with the Bedouin community.”

The site last shut its doors in 1982, when Egyptian forces reoccupied Sinai after the Israeli occupation. Its most recent closure came amid two months of attacks on other Christian properties on the Egyptian mainland, and a rise in insurgency in the north of the Sinai peninsular. Egypt’s Coptic Christians, who form around 10% of the total population, were blamed for instigating Morsi’s departure, even though his downfall had support across all religions.

But in St Catherine, locals complained that it is wrong to expect similar attacks at their monastery, where the local Muslim population sees the site as part of its heritage. Arguments broke out between monks and villagers after it was closed, but only because the latter wished to see it reopen. “For the people here, the monastery is everything,” said Khadr. “We grew up with the monastery – it’s our history, our roots.”

Speaking from inside the compound, Ahmed Mohamed said: “At churches in Upper Egypt, there were problems. But St Catherine is a different case. Firstly, the local Bedouin know that the monastery is important to their life. Secondly, the Greek Orthodox church is different to the Coptic church. Everything is quiet in South Sinai, and in St Catherine especially.”

But elsewhere in Egypt, the situation is not so stable. On Thursday, a car bomb attack on the interior minister, Mohamed Ibrahim, missed its target but injured 21 others. Ibrahim heads the country’s police, and has been a vocal cheerleader of the crackdown.

In St Catherine, there were fears that the attack would give the state further justification to keep the monastery closed.

“It was expected to reopen on the 13th or the 15th of this month,” said Sheikh al-Gebaly. “But after today’s bombings in Cairo we worry that the curfew and the state of emergency will remain and the monastery will be forced to close for longer.”