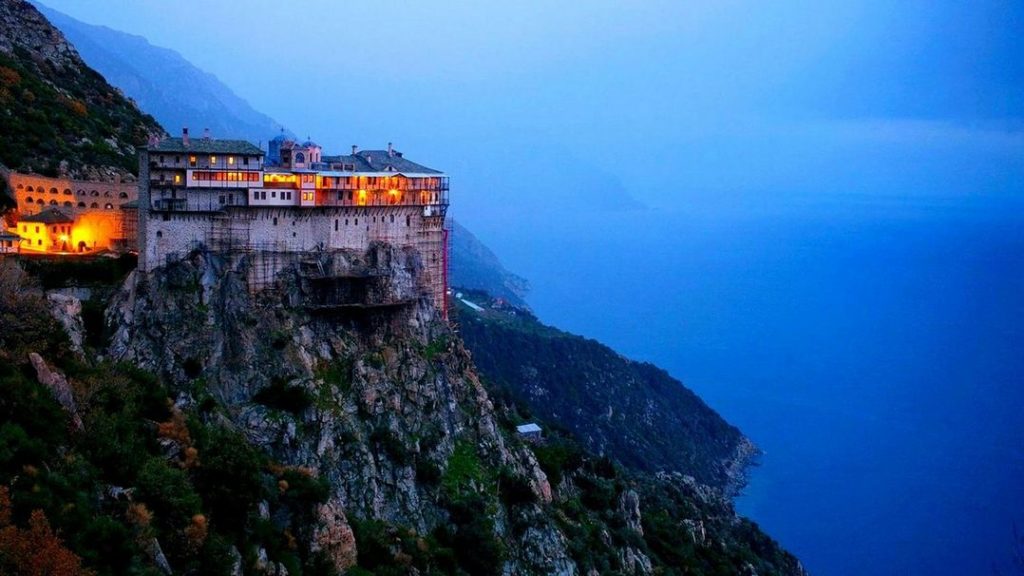 [Mt. Athos, March 23, 2020] While the Holy Mountain has closed its port to pilgrims until the end of the month, the monastics continue to uphold the faithful through their prayers.

In this vein, the Sacred Community, the governing body for the 20 ruling monasteries and their associated sketes and cells, has called on all the monasteries to serve All-Night Vigils to the Mother of God and to hold cross processions, entreating God’s mercy and grace as the world continues to suffer from the coronavirus epidemic, reports the Greek Orthodoxia News Agency.

At its Thursday session, the Sacred Community, consisting of one representative from each of the 20 ruling monasteries, decided to announce to each of the monasteries its decisions regarding the fight against the spread of the virus through active prayers, processions, and Vigils.

“The representatives and abbots of the 20 monasteries of Mt. Athos thus express their love for suffering mankind, for whom they pray with agony to the Most Holy Virgin, entreating her protection in such a difficult time,” the Orthodoxia report reads.

In particular, the decision of the Sacred Community calls for all the monasteries and their dependencies to serve an All-Night Vigil to the Most Holy Theotokos, the guardian of the Holy Mountain, and to the Martyr Charalambos, known as the healer of infectious diseases, in the night of Friday to Saturday in the fourth week of Great Lent.

The Community also calls for the monasteries to hold cross processions with relics and wonderworking icons at the discretion of and according to the custom of the holy monasteries.

In conclusion, the Sacred Community expresses the need to strengthen prayers and the celebration of the Sacraments during Great Lent and calls on all to repent “with all the power of the spirit of the Lord, the Lifegiving Source overcoming death.”

OrthoChristian earlier reported that Georgian and Ukrainian clergy are blessing their churches and cities with holy water, while His Eminence Metropolitan Pavel of Minsk sprinkled the entire city with holy water from a helicopter.