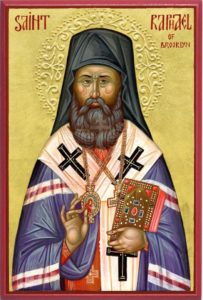 Getting to know the Saints who lived, labored and served in America.  Our Neighborhood Saints!

This Lenten period, observed in the time of the coronavirus, I am more mindful of prayer and looking inward with family and friends.   My prayer life has brought me to appreciate the Orthodox Christian Laity feature on its web site entitled Getting to Know our Orthodox Christian Saints who Lived, Labored and Served in America.   For some reason, I have found solace in the lives of the saints that knew us directly and labored in our neighborhoods throughout the United States.  They left their homelands and laid the groundwork, in synergy with the laity, for the development of Orthodoxy in this land.   The feature is a work in progress, and we hope to present the lives of all 19 saints before the end of the year.

I find the life and work of St. Raphael of Brooklyn most interesting.  Bishop Raphael was glorified (numbered among the saints) by the Holy Synod of the Orthodox Church in America in  March 2000. The glorification services took place in May of that year at St. Tikhon’s Monastery with the participation of bishops representing the Antiochian Orthodox Christian Archdiocese of North America, the Greek Orthodox Archdiocese of America, and the Church of Poland. He is commemorated by the Orthodox Church in America on February 27, the anniversary of his death, and by the Church of Antioch on the first Saturday of November.  He is buried at Antiochian Village, Ligonier, PA.  Saint Raphael of Brooklyn was a bishop of the Russian Orthodox Church, auxiliary bishop of Brooklyn, vicar of the Northern-American diocese, and head of the Antiochian Levantine Christian Greek Orthodox mission. He was the first

Orthodox Christian bishop consecrated on American soil.  He was born in Beirut, Ottoman Syria on November 20, 1860.  He fell asleep in the Lord in Brooklyn, NY on February 27, 1915.

St Raphael studied at Halki and Kiev, and his ministry took him from one country to another seeking theological knowledge and preaching the word of God.  He was ordained in Moscow, Russia, and raised to the rank of Archimandrite.  He also focused on restoring the Church of Antioch to its native people to free it from foreign dominance (Russia and Greece).  In 1895, he was invited by the Syrian Orthodox Benevolent Society of New York to come to the United States to teach, preach and celebrate the Divine Liturgy.  There was a great need for this at the time, since so many immigrants were turning to other traditions because of the lack of an Orthodox ministry here in the USA.

He defended the faith and in 1896 undertook many more journeys, giving the sacraments and preaching, and appointing pastors after obtaining the proper authority from the Russian hierarchs. This was the norm until the Russian revolution disrupted church life in Russia and America.  Saint Raphael’s tremendous travels included the northeast, southern and midwest regions of the US; and he ministered to all Orthodox people.  He was asked many times to return to Russia, but his influences in America and his projects were unfinished. He said he was unable to return.  He was committed to his pastoral responsibilities, administration, ordaining priests, making assignments and publishing one of the most important magazines, and first of its kind in America, the “Word”, which included spiritual and moral content.

He continued his missionary work, and his base was the church he established in Brooklyn, Saint Nicholas Cathedral.  It is here that he understood the necessity of using English in worship for the continuation of the Holy Orthodox and Apostolic Church in America.  OCL shares his example and ministry of outreach to all Orthodox Christians and encourages the use of English.  He was a missionary saint and dedicated his life to bringing the faith to all people.  He understood that the unity of the Orthodox Christians in America was a necessity.

Rejoice, O Father Raphael, Adornment of the Holy Church!
You are a Champion of the true Faith,
Seeker of the lost, Consolation of the oppressed,
Father to orphans, and Friend of the poor,
Peacemaker and Good Shepherd, Joy of all the Orthodox,
Son of Antioch, Boast of America.