OCL Celebrates the 20th Anniversary of the Resolution calling for Autocephaly of the American Orthodox Church. It is more relevant now, but little progress has been made (see text below).

BE IT RESOLVED THAT:  The Orthodox Christian Laity (OCL), assembled at its 11th Annual Meeting in the city of Los Angeles, California, on the eve of the Feast day of its patron saint, Symeon the New Theologian, petitions His All Holiness, Ecumenical Patriarch Bartholomew and the Holy Synod of Constantinople to grant autocephaly to the American Church; and calls upon the Standing Conference of Canonical Orthodox Bishops in the Americas (SCOBA) to reconvene the Ligonier conference of American hierarchs to once again proclaim that the American Church is no longer a “Diaspora”;  and to pursue the necessary steps with the Mother Churches in declaring that the “fullness of time” for the unification and autocephaly of the American Church has arrived as we move toward the third Christian millennium; and calls upon the members of the OCL and all Orthodox Christians in America to support the establishment of a united autocephalous Orthodox Church in America.

In 2018, Orthodox Christian Laity is celebrating the 20th Anniversary of its call for a self-governing American Orthodox Church.   The OCL Board passed this resolution on October 10, 1998, in Los Angeles, California, at its 11th Annual Meeting.  As you can see from the wording of the resolution, much has changed in the Greek Orthodox Archdiocese and with the relationships of the parallel Orthodox Jurisdictions in the United States to each other. The reality is that today, the Orthodox Christian Church in the United States is more fragmented than ever.  It remains uncanonical in its administrative and organizational structure.  This fact is recognized by the autocephalous and self-governing Patriarchs and hierarchs in Europe and other parts of the world who have set up the Assemblies of Bishops to find a remedy to regularize the disorder here and in other regions, to assist the Church to become locally self-governing.

However, the Assembly of Bishops in the USA seems stuck in the groove of fragmentation.  It has been meeting for almost 9 years with little progress.  It is necessary for the Patriarchs to declare the Churches in the United States self-governing.  The synod of bishops of the Orthodox Church in the U.S. needs to be composed of all the canonical Orthodox Bishops presiding in the United States of America – all 58 of them.  They need to elect their own head to be Patriarch of the Church of America.   Together they can work out all the considerations they presently have.  The Patriarchs will be strengthened by this reorganization of the Church in the United States, because they are the roots.  The Church in the United States will be part of the worldwide, multicultural Orthodox Christian Church.  If the Patriarchs do not act, the time has come for the bishops here to take the necessary actions so that the Church ceases to lose its flock.  Just look at the census and statistics of marriages and baptisms.  As we celebrate Pentecost, as we celebrate the love of the Holy Spirit – the Spirit of Truth, as we celebrate Christ’s Commission to bring the faith to all people, the status quo is unacceptable.

The internal structures of the Greek Orthodox Church (GOA) are more fragmented than at any other time in its history.  The Patriarchate has used the ancient practice of divide and conquer.  The establishment of separated metropolitanates, whose heads report to the Patriarchate, has weakened the Archdiocese.  Each metropolitan sees himself as a self-governing potentate within his Metropolis. This has weakened the office of the Archbishop of the GOA who has been undermined by this system. In addition, an “unofficial parallel Patriarchal nuncio” has been given unlimited power in the United States of America because of his relationship with the major donors of the Church.  This office undermines the authority of the office of the Archbishop.  The Charter of the Archdiocese has undermined the participation of the laity in the administrative life of the Church.  The laity are looked upon as a source of revenue and are asked to pay and obey.  The administrative structure of the Archdiocese lacks transparency and accountability.   The Archdiocesan Council, which is appointed, has not been actively involved in matters of governance and accountability.  Many factors have contributed to the bankruptcy of the Greek Orthodox Archdiocese.  It is not fair to lay the blame on the office of the Archbishop.

The Office of the Archons needs to inform the Patriarchate of the true situation of the life of the Church in the United States and not just be the advocate of the office of the Patriarchate to safeguard its stability in Turkey.  Replacing the Archbishop will not solve the difficulties of the Archdiocese.   The Archdiocese needs to be restructured, and the uncanonical structure of administration allowing parallel jurisdictions to exist, and in some cases, compete with each other, causes endless unnecessary duplication and waste of resources. This needs to be remedied.  Orthodox Christian Unity is the canonical solution. No more ethnocrats guiding the Church.  We want shepherds who know and love Jesus Christ and are not distracted by politics across the ocean. 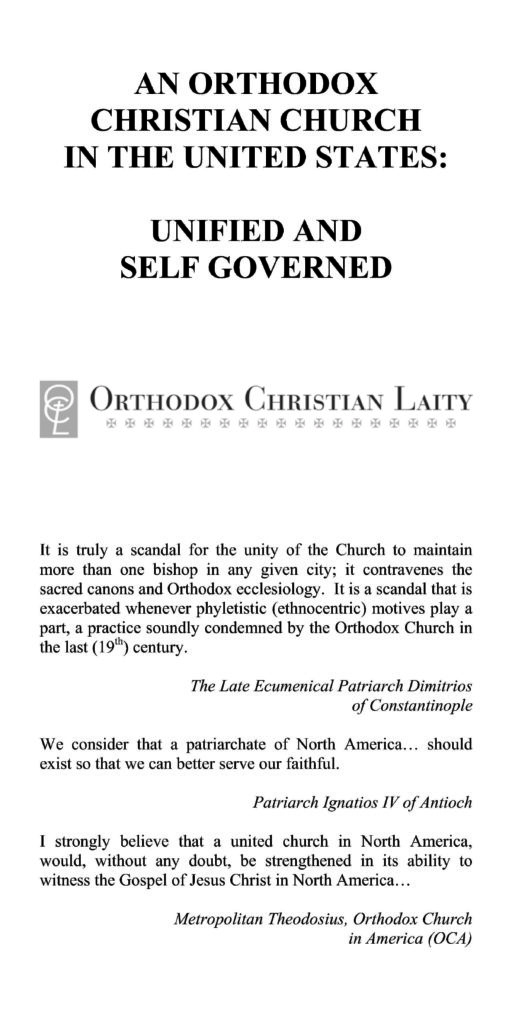 CLICK HERE to view (PDF format) the brochure: “An Orthodox Christian Church in the United States – Unified and Self Governed.”