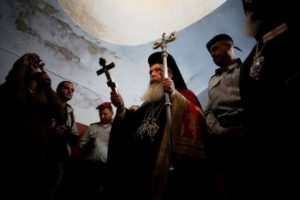 (Reuters/Baz Ratner)Greek Patriarch Metropolitan Theophilos holds a cross during a ceremony at the baptismal site known as Qasr el-Yahud on the banks of the Jordan River near the West Bank city of Jericho, January 18, 2013.

In an exclusive interview with The Jordan Times, Patriarch Theophilos said it is high time for Christian leaders in the Middle East to realize their responsibility and obligation to encourage Christian presence in the region. He urged the spiritual heads to unite in encouraging the remaining Christians to stay in their homelands, especially at a time when migration and forced displacement are threatening to erase Christianity in the area.

“We, the Christian leaders who have been living here [the Middle East]must join forces and raise our voices in order to mobilise the world opinion to support and second our efforts for protecting the Christians of the Middle East in order to encourage them to remain in their homelands,” said Patriarch Theophilos III.

Moreover, he also said Muslims in the Middle East should also help maintain the Christian presence in the region. The Orthodox leader urged the Muslims to join in their efforts to do so.

Last year, the Melkite Archbishop of Aleppo said the exodus of Christians from the Middle East could prove to be both “apocalyptic and fatal.” Metropolitan Jean-Clement Jeanbart described the atrocities of the Islamic State of Iraq and Syria (ISIS) against the believers as a form of deportation that condemns Christians to a “humiliating exile,” The Irish Catholic reported in October.

The Archbishop of Aleppo also denounced the sectarian purge of Christians at the hand of ISIS militants and the destruction of their homes and livelihood because of the violence. Like Patriarch Theophilos III, he also expressed his desire to help maintain the Christian community’s “prophetic presence” in Syria.

Despite the dwindling population of Christians in Syria, Archbishop Jeanbart remains confident that things will turn out alright because he trusts in God’s promises.