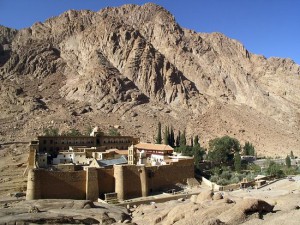 UPDATE October 22: It seems that the report below from Pravoslavie is inaccurate. I have just received this from Moustafa Elqabbany, Assistant Director of the Royal Islamic Strategic Studies Centre in Amman, Jordan:

I am in communication with people who personally know the monks in Sinai.

“Thank you for your e-mail. Many have written us about the recent reports that have been appearing in the news. Everything remains peaceful here. No monks have been kidnapped and held for ransom. No one has broken through the monastery door. At the same time, there are reasons to be concerned. Here is a bulletin that I wrote two weeks ago for members of the Saint Catherine Foundation.

======
“On June 8, 2014, Abdel Fattah el-Sisi was sworn into office as President of Egypt. Since then, he has taken steps to improve Egypt’s economy. He has implemented plans to excavate a parallel Suez canal, that would provide work for many Egyptians, and double the revenues from the canal. This will be funded exclusively by Egyptians. He has also taken steps to curb the state subsidies on bread and fuel. These allowed the poor to purchase bread and fuel at below market prices, but these subsidies were consuming up to one-fourth of Egypt’s state budget.

“President el-Sisi enjoys widespread popularity and support, as he departs from the policies that were being implemented by the Moslem Brotherhood. At the same time, we should not underestimate the numbers or the tenacity of those who wish that Egypt were a more Islamist state.

“Many countries have now cancelled their advisories against travel to Egypt. With the arrival of cooler temperatures at the coast, visitors are again returning in numbers, especially Russians, who now make up one-third of all tourists visiting Egypt. The economic outlook for the bedouin and for the monastery is slowly improving.

“Of more immediate concern is a campaign that was started against Saint Catherine’s Monastery by retired Major General Ahmed Ragai. He has accused the monastery of annexing properties, building on them illegally, and changing the names of sites that are sacred to Islam. He claims that the monks of the monastery are foreigners, working to create a state within a state, with the support of Greece and the European Union. They endanger the national security of Egypt, and must be expelled. These accusations become irrational, but he has used modern communications media to spread his message widely, and to play on Egyptian nationalism and patriotism. He has instituted seventy-two court cases against the monastery.

“The monastery has now made an extensive study of the Arabic documents in its archives. It has presented evidence of property ownership, some of these deeds going back to Ottoman times.

“Many important ministers have expressed their esteem and support for the monastery, and their dismay that Ahmed Ragai should be stirring up anti-Christian sentiment precisely at this time, when Egypt needs to move ahead.

“After a series of investigations, it was the recommendation of the governorate of South Sinai, of the Egyptian Archaeological Authority, and of the state security officials that these accusations were groundless, and should be dismissed.

“Instead, a few weeks ago, the court ordered a further inquiry. Three appointed delegates will visit the monastery and the properties in question, in the company of Major General Ahmed Ragai and his lawyer, together with a representative of Saint Catherine’s Monastery and their lawyer, to review the legitimacy of these claims. The inquiry is expected to take eighteen months.

“In the past, Saint Catherine’s Monastery was a part of the large Greek presence in Egypt, and its heritage and prerogatives were never questioned. This is no longer the case, and the monastery must find a way to assert both its heritage as a Greek Orthodox monastery, and its integral place in the contemporary Egyptian state.”

This is straight from the Qur’an: “Fight those who believe not in Allah nor the Last Day, nor hold that forbidden which hath been forbidden by Allah and His Messenger, nor acknowledge the religion of Truth, (even if they are) of the People of the Book, until they pay the Jizya with willing submission, and feel themselves subdued.” (9:29)

“Bedouins attack and levy a tax on St. Catherine’s Monastery on Sinai,” Pravoslavie, October 14, 2014 (thanks to Filip):

The most ancient St. Catherine’s (Katherine’s) Orthodox Monastery situated on the Biblical land of Sinai peninsula has been once again persecuted by Muslim extremists and local authorities, reports the Linga news portal with the reference to Copts Today.

For today Arab islamists, who lead a seminomadic way of life in the Sinai desert, pose the main threat to lives of the monks and condition of the monument of the world architecture.

Specifically, Dr. Iyhab Ramzy, a prominent lawyer, related the following details of the crimes committed by the extremists against the monastery and its monks, to the journalists:

“Recently some residents of Tala district attempted to take the monastery by storm—and eventually they managed to demolish the gate and took two monks hostage. The monks had to submit to the raiders and agreed to pay them a tax in exchange for end to the attacks. Nevertheless, the islamists are still threatening all the clergymen and monks with violence, this time because of the monastery territory that they claim had been illegally occupied”.

The lawyer stresses that in spite of the numerous complaints and appeals the law-enforcement agencies did not react to the existing situation at all, remaining outsiders and, in fact, accomplices of the above-mentioned offences. “The only pseudo-juridical instance in the desert is the Arab tribes’ court that has levied a tax of 150,000 Egyptian pounds (about 21,000 USD) on the monks,” notes the expert.

However, according to the lawyer, “the oddities in behavior of the authorities” are not confined to this.

According to the evidence of Ramzy, local autonomous bodies close their eyes on the extremists’ calls to obliterate Christianity on Sinai and “to restore justice”, which means returning the Christian settlement Oyun Musa (“Moses springs”) to Muslims” with the reference to the Quranic texts.

“Against the background of all this lawlessness not only are the local officials sitting idle and doing nothing—they are even aggravating the existing situation,” Dr. Iyhab continues. “For example, not long ago the authorities imposed a certain tax upon absolutely all the monastery’s monks. It was done because the monastery had a refectory for pilgrims, which allegedly “served as a source of enrichment.” For the first time in Egyptian history, such a decision was made towards the ascetics who never leave the house of prayer! Ramzy has regarded the actions of the respective agencies as “an attempt to annihilate Christianity in the region,” concluding: “All this leads to the physical destruction of the monastery as such”.

In his interview with the website, a monk from St. Catherine’s Monastery, Hieromonk Gregory, related a more striking demarche of the “Ikhwan” (“of Muslim brotherhood”) authorities against the monastery and its brothers:

“While still under president Morsi, a retired colonel named Ahmad Radjai Atiye brought an action against the monastery. In it he accused us of ‘encroachments on state land’. It was found that we had ‘illegally constructed’ in 2006 many monastery churches, which in reality date to the time of the Holy Emperor Justinian I (527-565)!

“The local government, dependent on “the Muslim Brothers”, issued 71 decrees for the demolition of the fourth-century’s churches, giving Atiye’s action a chance to get ahead; and so already at the highest level the indictment confirmed the claimant’s lie”.

The clergyman also noted that hearing of this case would take place in November, asking all Orthodox brothers and sisters “to pray hard for preservation of the shrine common to all Christians, the true gem of the peninsula”.