His Eminence Archbishop Elpidophoros after the Divine Liturgy in Amman, Jordan, where he announced the provision of full scholarships to all Jordanian priests and deacons who wish to study at the Hellenic College-Holy Cross Theological School. Photo: GOA

BOSTON – A new crisis is boiling at Hellenic College – Holy Cross Greek Orthodox School of Theology (HCHC) in Brookline, MA, after a post on Facebook by Archbishop Elpidophoros from Amman, Jordan promising to give full scholarships to all of that country’s priests and deacons who want to study there.

The Archbishop made that announcement and commitment through his Facebook account while visiting the Holy Land and Jordan and acting as a tour guide for a group of Greek-Americans, including Archons of the Ecumenical Patriarchate.

The leaders of the School, its president George Cantonis, the members of the Board of Trustees, and the faculty, were surprised when they were informed about it from Elpidophoros’ post on Facebook since no consultation preceded, nor was any kind of notice given to Cantonis and the Trustees.

“Archbishop Elpidophoros of America is in Amman, Jordan.

After the divine liturgy at the metropolis of Amman, I announced that all priests and deacons in #Jordan are welcome to pursue their theological education at @helleniccollegeholycross with a full scholarship. This initiative manifests our active support towards the @jerusalem_patriarchate.”

The National Herald spoke with HCHC President George Cantonis by phone and the following was said:

TNH: Mr. President were you aware that Archbishop Elpidophoros announced that he is going to give full scholarships to Jordanian students, all priests and deacons who want to study at Hellenic College and Holy Cross School of Theology?

TNH: Did you attempt to communicate with the Archbishop to ask him what is going on, to ask about the announcement?

TNH: What did he say?

TNH: Does the School have the money to provide scholarships for all those Jordanian priests and deacons?

Cantonis: Without discussion with the Archbishop, I can’t comment.

TNH: Was the Board of Trustees aware of the Archbishop’s announcement?

Cantonis: I am unaware of any information that they may have received.

Cantonis: I can’t make any further comment until I have an opportunity to speak with the Archbishop.

TNH: Why haven’t you spoken to him? Why has it taken you so long?

It is reminded here that in the past Archbishop Elpidophoros has made similar interventions which led Cantonis to resign in May of 2021 as TNH has reported, but a few weeks later he recalled his resignation after discussions with the Archbishop. Cantonis had reacted then about the involvement of Bishop Athenagoras of Nazianzos in the affairs of the School, and the plan of Elpidophoros and Athenagoras to make the School of Theology a monastic community like the School of Hakli, with monks and novices. 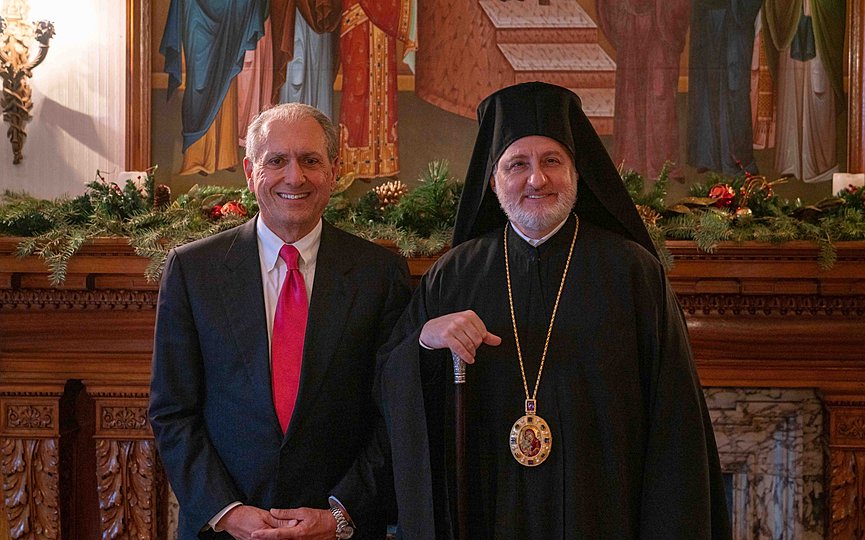 In the meantime, students who read the Archbishop’s post on Facebook became upset and communicated with TNH asking if we had known about it, but they declined to make any comment for publication because they are afraid of retaliation.

Hierarchs from the Phanar told The National Herald that “Elpidophoros displays special care and favoritism to clergy and students of Arabic origin because he is half-Arab himself, on his mother’s side.”

It is emphasized here that the money for scholarships for the students of the School of Theology is provided by the Leadership 100, specifically for Greek-American students enrolled in the Master of Divinity Program leading to the priesthood in order to serve in the parishes of the Greek-Orthodox Archdiocese of America.

It became known from the Phanar that among the ultimate plans of Archbishop Elpidophoros is the direct submission of the Leadership 100 endowment to the Archdiocese so that its portfolio of approximately ninety million dollars could go to the Archdiocese. The current chairman of Leadership 100, Jim Logothetis, is connected by ties of friendship with Elpidophoros, a fact that causes many members of its Board to be concerned, as The National Herald is in a position to know.

TNH has also learned that Rev. George Parsenios, the Dean of the School of Theology who was appointed almost two years ago, has expressed to the members of the faculty his intent to resign from the Deanship for which he was hired, but will remain as a professor. The School’s officials indicated to him that he should stay a little longer as Dean to avoid sending a wrong message to the academic authorities of Massachusetts and the Church and the Greek-American Community, that is to say, that the School changes its Deans very often. In the meantime, Fr. Parsenios a few weeks ago was appointed presiding priest at the St. Nicholas Parish in Lexington, MA. A telephone call and a written message from TNH to Fr. Parsenios went unanswered.