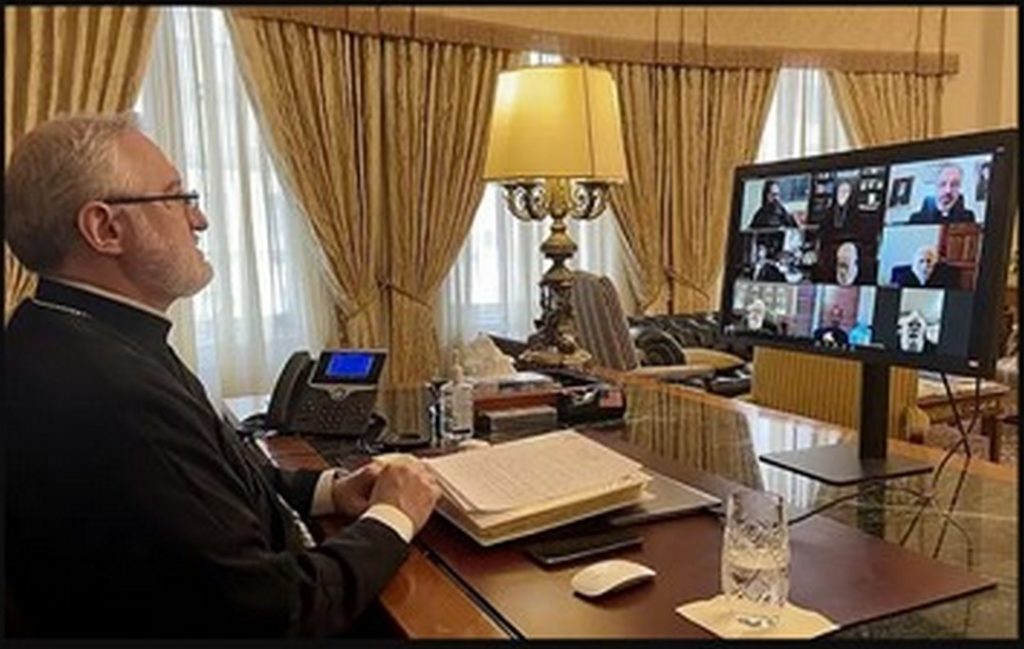 His Eminence Archbishop Elpidophoros presiding via Teleconference at the meeting of the Holy Eparchial Synod of the Greek Orthodox Archdiocese of America. (Photo: GOA)

BOSTON – The new charter of the Greek Orthodox Archdiocese of America will not be presented at the upcoming Clergy-Laity Congress this July, but at the next one in year 2024 because valuable time has been lost and there is not enough time to draft it in time for this year’s Congress.

As The National Herald had reported, the Synod of the Ecumenical Patriarchate scheduled to be convened from Sunday March 13 will appoint the members of the Patriarchal delegation which is going to collaborate with the corresponding committee appointed by the Archdiocese.

It is emphasized here that His All-Holiness Ecumenical Patriarch Bartholomew will have the last word and final approval because the Archdiocese of America is an Eparchy of the Ecumenical Throne and its Charter is considered a gift of the Primary Authority (Πρωτουργός Αρχή), that is the Patriarch and the Synod abound him.

It should be noted here that until then, July of 2024, the old Charter will be in effect even though it had been revoked on October 8, 2020 by Patriarch Bartholomew himself and the Holy Synod upon the recommendation and request of Archbishop Elpidophoros of America.

Sources from the Phanar told of The National Herald that the plan of Archbishop Elpidophoros is to divide the existing metropolises into two or three districts where an equal number of bishops will be appointed who will not be ruling bishops (Επαρχιούχοι Επίσκοποι) but auxiliary Bishops (Βοηθοί Επίσκοποι) reporting directly to the Archbishop, who will decide on the relevant matters by himself.

As the National Herald has written, that would be a return to Archbishop Iakovos’ system of a ‘monarchy’ led by an Archbishop presiding over auxiliary bishops. The Metropolis of San Francisco for example will be abolished as it is today and three districts will be created with equal number of auxiliary bishops.  The same thing will apply to the other Metropolises as well.

The existing metropolitans will continue to be recognized as metropolitans until their departure to eternity or retirement, and they will not be replaced by other metropolitans but with auxiliary bishops. Thus,  the metropolises will be eliminated over time. This is the reason that the vacancy in the Metropolis of New Jersey has not been filled.

TNH is in a position to know that many hierarchs of the Ecumenical Patriarchate disagree completely with these aims of Archbishop Elpidophoros and they speak of them as insults to the Church and Omogenia of America because the impression is given that they are ecclesiastically immature. They also believe that Elpidophoros is not competent to administer a entire Archdiocese of America invoking various reasons, including his inability to appoint a serious and competent Chancellor and Dean at the Archdiocesan Cathedral of the Holy Trinity in New York. They also raise financial issues since the Community cannot sustain the additional bishops and ecclesiastical districts.